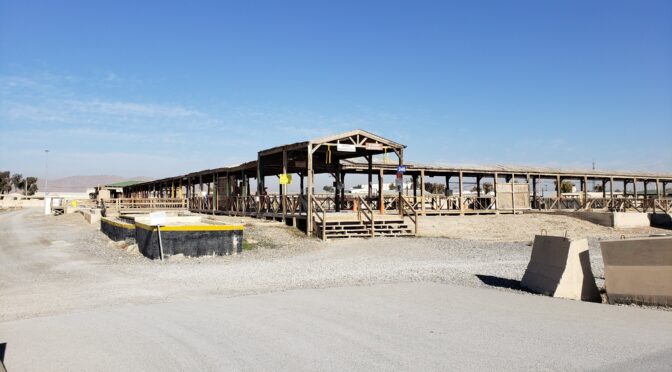 By Micah Petersen and Addison McLamb

As the final boardwalk shop on Kandahar Airfield closed its doors for the last time, reality hit home: this time the United States was actually leaving Afghanistan. A decade ago, thousands dined at TGI Friday’s on the boardwalk and joined in for Salsa Night; but now the desert dust of Kandahar blew trash across the empty basketball court and into the barbed-wire fence surrounding it, deterring anyone from playing a game during the COVID-19 pandemic. Unlike the proposed closure of the airfield in 2015, the minimal numbers of U.S. troops throughout the country was indicative of an impending full withdraw. A nearby volleyball court, track, and soccer pitch—once part of a bustling complex of over 30,000 visitors—now sat empty in the sun, waiting for the revolving door of imperial powers to supply its next occupant.

The U.S. military began its first withdraw from Afghanistan in 2011, but 2,500 troops remained in the country at the start of 2020. In February 2020, as part of a U.S.-Taliban peace plan, former President Trump agreed to the full, conditional withdraw of all U.S. troops by May 2021. President Biden then delayed the date of withdraw until September 2021. With the withdraw now complete, continued instability in Afghanistan seems inevitable, and foreign stakeholders will vie for leverage as part of a larger Central Asian strategic competition for influence. Of these players, China is uniquely poised to fill Afghan power vacuums and pursue its foreign policy objectives in Afghanistan by leveraging its historic neutrality with the Taliban, capitalizing on existing Belt and Road Initiative (BRI) projects in Afghanistan, and backing Pakistan to consolidate gains in a post-American occupied Afghanistan.

Predominantly populated by a European diaspora, the United States first sought its strongest foreign ties with the “Old World” of Europe. In contrast, as a civilization unto itself, China sought its strongest ties and influences with the areas most able to affect domestic wealth and power—in a word, its borders. Throughout history—perhaps inspired by a “Go” strategy of avoiding encirclement—China has sought to secure lines of communication (LOC) in zones of influence adjacent to its borders. Whether through the eastern “nine-dash line” or western clashes with India, China sees its borders less as boundaries, but more as the circumference of a territorial platform from which to project power in near-area zones of influence, thereby ensuring domestic security and buffering outside threats to the desired “Grand Society” envisioned by Confucius.

This realist approach to security has also been balanced with a partnership approach via bilateral relations under the BRI. The Chinese Communist Party (CCP) likely recognizes its western-focused BRI will necessitate power projection in Afghanistan. Beijing’s policy proposals often allude to Chinese cultural references or shared history (usually an attempt to nest the young Communist Party within ancient Chinese society), and the choice of Silk Road alliteration is not melodrama. China probably desires Central Asian resources and economic clientelism to offset any adversarial posturing from South Korea, Japan, or Taiwan. Beijing would also anticipate Pakistan’s help with any push to utilize LOCs in and around Afghanistan. As if to signal the depth of their alliance, Pakistan and China recently leaked an intelligence agreement between Pakistan’s Defense Ministry and China’s Central Military Commission, demonstrating their willingness to combine strategic effort with tactical collaboration. Overall, China recognizes that stabilization in Central Asia requires a stable Afghanistan.

Over the last two centuries, Beijing learned from previous Russian, British, and American occupations in Afghanistan. As a result, the CCP has neither taken an official political stance against the Taliban nor generated unilateral policy positions towards Afghanistan. Their “bilateral” relationship with Afghanistan (framed with the same grandeur and opacity as its nearly eighty other BRI “bilateral” partnerships) allows the CCP to exert paternalistic dominance in economic relationships whilst couching investment loans as indicative of symbiotic “global leadership.” With the Taliban now in control of most of Afghanistan, Beijing could use infrastructure investment and United Nations’ influence to support a Taliban-ruled Afghanistan. Supporting a Taliban regime could also allow China to excuse itself from foreign accusations of anti-Islamic bias. The Taliban is geographically postured to quell any potential uprisings against their CCP partners, allowing Xinjiang abuses to be cast as a purely secular effort to shore up public safety rather than as an Orwellian plan to crush recurring thought crime.

Overall, to China, Afghanistan likely reflects a ripe investment opportunity, credible hedge against criticism of anti-Islamic bias, and tantalizing opportunity to display international leadership. To Afghanistan, China likely represents a steady supply of invasion-free investment, a sympathetic ear within the United Nations Security Council, and a pan-Asian sense of durable partnership. Whether the relationship blossoms will be largely dependent on the real returns of each side’s commitment.

During America’s two-decade effort in Afghanistan, Beijing took advantage of waxing relations (especially in the Hu Jintao era) to quietly fund infrastructure investment throughout the country. This was not a new tactic for China—from the early 20th century through the 1980s, China bankrolled various African infrastructure projects and even supplied weapons to sub-Saharan tribes fighting for independence from their colonial invaders. China transitioned to more passive models for the next three decades (largely due to Deng Xiaoping’s famous “lie low” doctrine and Jiang Zemin’s “Shanghai Clique”opportunism), which culminated most recently in Xi Jinping’s hybrid BRI.

Modern Sino-Afghan relations were significantly shaped by Mao’s diplomacy in the 1960 Beijing-Kabul Non-Aggression Treaty. Despite sharing a slim border with Afghanistan; and even in comparison to the billions of dollars of United States’ aid since 2001, China nonetheless still holds rights to Afghanistan’s largest foreign investment project: the Aynak copper mine. Chinese payments for mineral exploitation fees alone guarantee the Afghan government an annual return of over $800 million. As strategic hubs like Kandahar Airfield are no longer controlled by foreign actors, China’s construction and operation of airports in Zimbabwe and other African states foreshadows interest in controlling and managing Afghan transportation networks. The Taliban lacks any experience in operating international airfields, and China is likely to offer its managerial expertise in hopes of establishing a similar control over transportation networks that it has with aforementioned African states. The durability of economic quid pro quo is questionable, but Chinese strategic intentions remain clear.

Infrastructure development in Afghanistan allows China to secure both profit and security. The Taliban has a history of supporting the Eastern Turkmenistan Movement, which is China’s largest terror threat in Xinjiang. Using Afghan infrastructure investment as an incentive—and domestic resources (like Aynak) as collateral—Beijing can field both carrots and sticks to dissuade Taliban support of Uighur Turkic groups. The mechanics of such negotiations can be nested within BRI projects and then marketed as skillful CCP maneuvering focused on both foreign and domestic outcomes.

Chinese success in Afghanistan will be most reliant on its alliance with Pakistan. Kipling’s famous “Arithmetic on the Frontier” lyricizes the debilitative cost of attempting to stabilize a society that has been de facto tribal since the 14th century Durrani Empire. True to Kipling’s foreboding, it seems that durable stability in Afghanistan will only come when Pashto, Tajik, Hazara, Uzbek, and other minority tribes are aligned to a common national vision. China’s initial networking among some of Afghanistan’s most rugged and hardened regions—in concert with Pakistan—will pay dividends in their understanding of how to assess and realign competing visions.

The United States and Soviet Union both struggled in Afghanistan in part because of difficulties in suppressing insurgent activity from the ungoverned Federally Administered Tribal Areas (FATA) along the Afghanistan-Pakistan border. Relationships with powers like Pakistan are helpful for casting a wider, more effective net against regional terror activity, and China has a very strong and stable diplomatic relationship with Pakistan. Through this relationship, China has arguably set conditions to stabilize the infamous northeast provinces near the FATA. This could create a power dynamic where Beijing’s most significant negotiations would be with the Pashto and Taliban-dominated South—areas historically more aligned with kindred Pashtos in Pakistan. Northern stability and southern alliances may then serve as a platform to negotiate with a larger confederation of tribes (including those of the former Northern Alliance) to more quickly realize a Durrani redux and Afghan solidarity.

The crux of China’s involvement in Afghanistan relates primarily to security—both economic and domestic—and the risk tolerance of the CCP to flex global leadership aspirations in such a difficult environment. China will likely mitigate this risk by leveraging its existing infrastructure investments and strong alliance with Pakistan, while using BRI channels and domestic information control to frame the move as necessary for Central Asian prosperity and stability in Xinjiang. Furthermore, with the inevitability of the Taliban attaining at least some formal influence within Afghanistan governance, China remains the only permanent United Nations Security Council member whose relationship with the Taliban could bring benefits to both parties.

The U.S. military and NATO writ large made a lasting impact on the country of Afghanistan. Despite the fall of the Afghan government, other aspects of development such as female literacy rates, female employment, and significant overall growth of GDP per capita since 2001 are evidence that the NATO mission transformed the lives of Afghans. But long-term outcomes of western involvement remain ambiguous.

If history is any guide, U.S. troops will not be the last foreign soldiers to see shops close their doors at Kandahar Airfield. What we do know is that the discussion regarding Afghanistan’s future development is a conversation space that should not be dominated solely by the People’s Republic of China. The CCP’s expansion over the last decade, and its associated exploitation of countries in need of steady development, raises enough red flags to force the United States and its allies to consider how China will insert itself in Afghanistan over the coming years. Recognizing the incentives China possesses to influence Afghanistan is of the utmost importance and critical for the United States as it repositions itself within the Middle East.

Micah D. Petersen is a graduate of the University of Delaware with a BA in International Relations and an MA in Geography, focusing on Chinese migration to Africa. He is also a Schwarzman Scholar and currently serves as an Infantry Captain in the United States Army. He  has studied and traveled to over 25 countries and deployed to Kandahar, Afghanistan as the Aide-de-Camp to the Kandahar Airfield Commanding General.

Addison McLamb is a graduate of Wake Forest University with a BA in Chinese Language and  Culture, focusing on Chinese foreign policy. He is a Schwarzman Scholar (Class of 2017) and currently serves as an Intelligence Captain in the United States Army. The views expressed are those of the authors and do not reflect the official position of the Department of the Army or Department of Defense.

Featured image: December 2020 – Once the center for social activities, the Kandahar Boardwalk sat desolate before coalition forces handed it over to the Afghan government in January 2021. (Credit: authors)