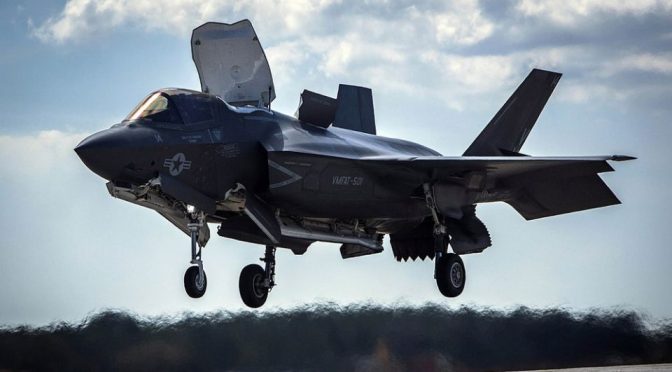 In January, CIMSEC published an article in which the author advocated against Turkey’s ongoing participation in the development, manufacture, and eventual purchase of the F-35 Lighting II. Broadly, as January’s piece noted, debate over Ankara’s eventual acquisition of the F-35 has come as a result of Turkish President Recep Tayyip Erdoğan’s insistence upon purchasing and operating the Russian-made S-400 Triumf  air defense missile system (NATO reporting tag: SA-21 Growler). As lawmakers on the hill and Department of Defense leaders have warned, connection or even close operation between Lockheed Martin’s 5th generation fighter and the Russian air defense system represents a critical security breach which could undermine the aircraft’s operational advantage in the future.

Despite months of warning and posturing which signaled to Ankara that acquisition of the S-400 would jeopardize the future of the Turkish F-35 fleet, Turkish officials have repeatedly emphasized that cancellation of the S-400 purchase is “out of the question.” American officials have attempted to provide counter offers, most notably through a discounted sale of the American-made MIM-104 Patriot surface-to-air missile system. None of the attempts at mediation have worked, with the Turkish Minister of Foreign Affairs, Mevlüt Çavuşoğlu, stating emphatically that Turkish purchase of the S-400 “is a done deal.”

As a result, on April 1st, the Department of Defense confirmed a Reuters report that stated the Pentagon was halting shipments of critical parts and equipment required for the stand-up for Turkey’s first F-35 squadron. In the piece, Reuters quotes DoD spokesman Lieutenant Colonel Mike Andrews and notes that, “pending an unequivocal Turkish decision to forgo delivery of the S-400, deliveries and activities associated with the stand-up of Turkey’s F-35 operational capability” have been delayed indefinitely. This was the Pentagon’s first major move in countering Turkish obstinance.

Complicating matters further, Senator Jim Inhoff (R-OK), Jack Reed (D-RI), Jim Risch (R-ID), and Bob Menendez (D-NJ), Chairman and Ranking Members of the Senate Armed Services and Senate Foreign Relations Committees, respectively, published an op-ed in The New York Times which explicitly forces Turkey to choose between the F-35 and the S-400. Barring a Turkish decision to drop the S-400, they write, “no F-35s will reach Turkish soil” and “sanctions will be imposed as required by United States law under the Countering America’s Adversaries Through Sanctions Act (CAATSA).” Secretary of State Pompeo supported these remarks on Wednesday when he told the Senate Foreign Relations Committee that there would be no Turkish F-35s if they do not abandon the S-400. Curiously, Secretary Pompeo stopped short of definitively stating whether or not Turkish S-400 acquisition would trigger American sanctions as required by law under CAATSA. While Pompeo’s hesitance may have only been an attempt to keep all options open, it could also have links to Minister Çavuşoğlu’s ardent claims that President Trump personally assured Erdogan that he would “would take care of this issue” in reference to the F-35.

Where Do We Go From Here?

It appears, for now, that Ankara faces a choice. In Washington, legislative efforts to bar sales of the F-35 to Turkey seem to have garnered bipartisan support and congressional support. In Ankara, Erdogan leveraged the S-400 issue at almost all of his campaign rallies leading up to the March 31st Turkish elections. Elections which, coincidentally, took a toll on Erdogan’s AKP party on the local level. Nevertheless, Erdogan has continued to posture surrounding the S-400 issue, with the European Council on Foreign Relation’s Asli Aydıntaşbaş writing that Erdogan has seemingly adopted the issue as “a sign of his virility, his independence, his power on the world stage that he could say no to [the] United States.”

Internally, it seems that there are those among Erdogan’s staff who believe the Americans are bluffing and that both systems will eventually solidify themselves in the Turkish arsenal. They are not entirely helpless, either, with American basing rights at the critical Incirlik Air Base standing as a potential bargaining chip for Turkish negotiators. Turkish negotiators face a hard battle, however, as the Pentagon has said it is already looking for alternatives to the F-35 parts currently made in Turkey.

This standoff has not only placed pressure on the Turkish-U.S. relationship, but moreover is raising questions about Ankara’s standing within NATO as a whole. Rick Berger, a former Senate Budget Committee staffer and current researcher at the American Enterprise Institute has noted that this flashpoint has repeatedly brought up, “the whole ‘Should Turkey be in NATO?’ question.” Moreover, the NATO countries that operate the F-35 have internally expressed concern over interoperability with Turkish airframes should they link to the S-400. At a time when Russian President Vladimir Putin has regularly engaged in policies aimed at destabilizing the transatlantic alliance, perhaps the Turkish F-35 crisis presents not just a commercial or political threat to the U.S.-Turkey relationship, but a strategic threat to NATO as a whole.

Jon Isaac is a pseudonym for a developing security analyst.