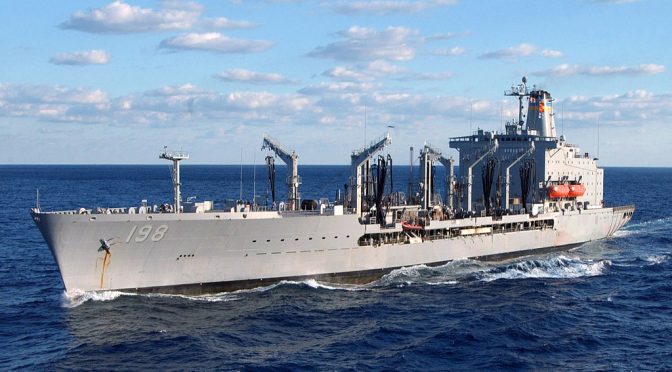 The following article originally published on gCaptain and is republished with permission. Read it in its original form here.

“It is an unfortunate fact that we can secure peace only by preparing for war.” -John F. Kennedy

As has been the case before every major world conflict a majority of citizens believe that peace will persist indefinitely and, as a civilian myself, I tend to agree that a large-scale war with a major superpower like China or Russia is unlikely. Regardless of my views, the United States military is spending billions to prepare for war against China in the hopes that being fully prepared for war is the most effective means of preserving peace.

This article is not intended to support or speak out against the U.S. military’s efforts to prepare for a war against China and it is not to discuss the wisdom of my nation’s military decisions. It is only written with one purpose. That purpose is to acknowledge two absolute facts today: that the U.S. Military is preparing for war and I, an American merchant ship captain, am not ready.

What Is The U.S. Merchant Marine

“The U.S. Merchant Marine is in every war plan that I review, I guarantee you, because you’re going to be the fourth arm of defense.” -Former U.S. Secretary Of Defense James Mattis.

Members of today’s United States Merchant Marine (USMM) do not wear uniforms, they do not cut their hair short, they are not active duty military, and only a few are in the U.S. Navy Reserve. They do not get veterans benefits, special privileges, government healthcare or retirement pay. They have no special right to carry weapons on land or enter most military bases without special permission. They are civilians.

Some members of the merchant marine wore uniforms while they attended maritime academies that must, by federal statute, follow military traditions. Others have never worn a uniform of any kind. Yet the importance of the merchant marine in past military successes is undeniable and all of today’s military flag officers admit they play a central role in all future war plans.

But what is the Merchant Marine?

As a journalist I have asked this very question (what is the U.S. Merchant Marine?) to our nation’s leadership, I have asked our Merchant Marine Veterans, award-winning historians, and the highest ranking U.S. military officials. Each has answered my question with a slightly puzzled look and vague statements about our role in national defense.

In 1938 congress established the United States Maritime Service (USMS) to answer that question and established uniform standards, training requirements, and structure. Those regulations still exist and the USMS lives on today. We have a Commandant, we have Admirals and Commodores, and we have our own service academy, but not much else.

Am I a Captain in the U.S. Merchant Marine? Absolutely! What is my role or rank in the US Maritime Service? Am I allowed to wear a uniform? If so, can I wear my navy medals on it? Do I salute? Does anyone salute me? Where do I report if war breaks out? Who at the USMS can I call with questions?

Answer: I haven’t got a clue.

While the status of mariners in the USMM and USMS is vague and nebulous the status of ships is well-defined. Currently 81 U.S.-flagged ships sail internationally and our fleet of reserve ships are battered, old, and wholly insufficient for war. “Our sealift fleet is able to generate only 65 percent of our required capacity” said Army Gen. Stephen R. Lyons, Commander, U.S. Transportation Command (TRANSCOM), last month. “And is rapidly approaching the end of [its] useful life.”

U.S. Maritime Administrator (and USMS Commandant) Rear Admiral Mark Buzby has made no secret of our need to build new ships and refurbish our fleet. The problem is that ships are expensive, take years to design and build, and do not capture the nation’s imagination like a new destroyer does. Most merchant ships are ugly but absolutely essential because there is simply no other way to move equipment and materials into theaters of war overseas.

Nearly everyone in the United States military and Merchant Marine, including myself, readily agrees that we need to do more to support domestic shipbuilding. That said, everyone secretly knows another fact that few are willing to admit publicly. The fact is that in a large-scale war against China the United States can take the ships we need or demand them from our allies.

What we can’t demand is that foreign sailors man these ships and sail them into combat. For that we will need strong allies and highly competent and well-trained American sailors.

Today’s American merchant sailors are well-trained and experienced but we are lacking skills in the latest technology and, as the number of U.S. flagged ships decreases, so do our numbers. According to Adm. Buzby the USMM is about 1800 mariners short of the numbers needed to do sustained sealift operation using today’s reserve assets (which are also insufficient).

Are Mariners Prepared For War?

During WWII the USMS invested enormous resources in training merchant mariners for war. Large training facilities were built across the nation and both naval and civilian instructors worked together to teach sailors how to survive the dangers of war.

Not long ago USMM officers could enroll in basic classes on subjects like avoiding mines, joining a convoy, and secure communications. Then MARAD shut down the last school that offered these courses. Today a small percentage of U.S. Merchant Mariners receive basic military instruction as part of the Navy’s Strategic Sealift Officer program. This program however, lacks a cohesive structure, objective, and scope. And it is only open to those willing to join the Navy Reserves.

Others that sail on ships contracted by the military take some basic classes including firearms and CBRD (Chemical Biological Radiological Defense) but the scope of these classes is limited to basic self defense.

Personally I attended four years of school at a merchant marine academy, sailed on ships for ten years, spent thousands of hours studying for U.S. Coast Guard Examinations, sat in hundreds of hours of post-graduate classroom instruction and demonstrated my knowledge and experience in  myriad of ways before earning a license to master the world’s largest ships.

Yet in all those years of study there are some questions I never learned the answers to:

How do I join a military convoy?

How do I contact a naval vessel on a secure line?

How do I navigate a minefield?

What do I secure for radio silence?

How do I darken ship to naval standards?

The answer to all these questions (and countless more) is, again, I don’t have a clue.

In recent months the U.S. Navy has been honest in telling mariners that, in the event of a major war with China or Russia, the U.S. Navy is going to be busy with combat operations and we can not expect naval escort. What they don’t tell us is that they also have no plans to train us to defend ourselves.

Am I, as a captain in the USMM ready to sail my ship into contested waters?

The answer is I am fully ready to sail my ship anywhere, even into conflicted waters, everywhere except into large-scale war.

Will I Take Command Of A Ship During War?

“American needs to do its best for all our veteran families” –R. Lee Emery

I am convinced the nation will need the help of my fellow American ship masters but how many of us will join the war effort?

Based on historical evidence and the level of patriotism and will of today’s Merchant Marine most experts believe that, in times of war, a majority will answer the call.

Personally I can not answer for my fellow merchant mariners. I can only answer for myself. As an American I believe it’s my duty to serve my nation during a major crisis and I would absolutely sail into harm’s way. But why? The reason is I am a father and I want my children and grandkids to grow up in a free country and have the opportunity for a happy life. But that’s also the rub.

If war broke out tomorrow and I was killed or injured in the service of my nation who would take care of my family? Would my children be able to go to a Veterans Hospital if they got sick? Would they be eligible for any scholarships? Would they receive any financial compensation from the government?

Would they even be able to fly the gold star with a blue edge flag outside their house? The flag that represents a family member who died during military operations? Would my wife even be eligible to join veteran family support groups?

The answer to these questions is…I don’t know.

And so is the answer to the question of my willingness to captain a merchant ship into the next war… I don’t know.

A Message To Commandant Buzby

Commandant Buzby, many thanks for your tireless and continual effort over the last year to support the U.S. Merchant Marine. We American merchant mariners are truly grateful. Personally I would like to thank you for inviting me to Washington to review my criticism of MARAD’s efforts. Your efforts are making a difference and I thank you.

That said, the next fight will not be about the number or condition of our ships or the strength of our enemy. We can not out build the new manufacturing nations. We only have one option to win the next war and that is by focusing on people.

To prepare this nation please prepare me and my fellow mariners. Let us train with the navy at no cost, ask the nation to subsidize not just ships but officer training, bring back the USMS, and let us know we are wanted by issuing DD214’s to all U.S. mariners who served in combat zones.

If the Navy continues to marginalize and ignore our needs then our nation will lose, but convince the military to help us train and make us feel like part of the team…and we will help the country win.

Time is not on our side, we must do this now.

A Message To Admiral Moran

To Admiral Moran, as our soon-to-be Chief of Naval Operations, do not let war be the reason we start working together. We can’t wait that long. Admiral Buzby and MARAD are working tirelessly to prepare the USMM for war but they do not have your budget, your influence, or your ability to mandate immediate change… and the civilian companies our Merchant Mariners work for today are just not going to prepare mariners for a full-scale conflict. Most don’t believe a full-scale conflict will ever take place.

The ball is in your court. Please help us so that when you need our help we are ready.

Captain John Konrad is the founder and CEO of gCaptain and author of the book Fire On The Horizon. John is a USCG licensed Master of Unlimited Tonnage, has sailed a variety of ships from ports around the world, and is a distinguished alumnus of SUNY Maritime College.

6 thoughts on “Admiral, I Am NOT Ready For War”