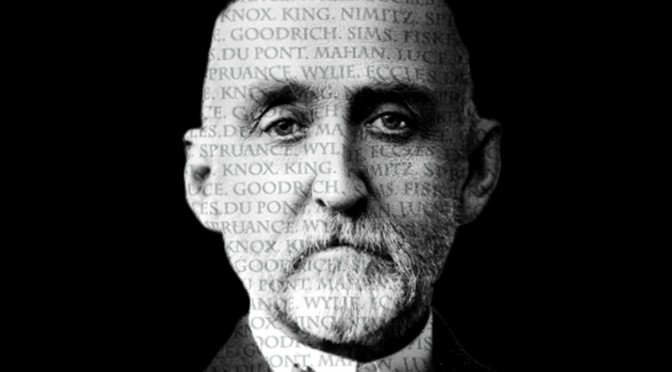 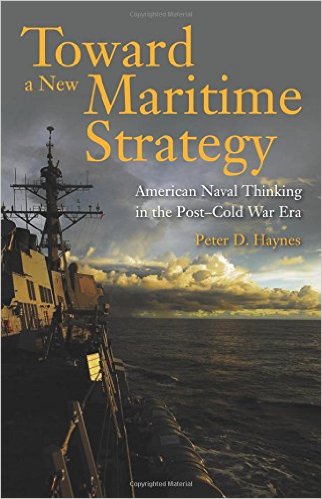 Peter D. Haynes has written a singularly useful book for anyone interested in how the American sea services—shorthand for the U.S. Navy, Marine Corps, and Coast Guard—think about, make, and execute maritime strategy. Captain Haynes is a naval aviator, sports a Ph.D. from the Naval Postgraduate School, and serves as deputy director for strategy, plans, and policy at the U.S. Special Operations Command.

Now, it’s doubtful he has penned a bestseller. There just aren’t that many folks out there in the wider reading public inclined to get their navy geek on. That’s a shame. But it should be required reading for readers of these pixels, and for anyone entrusted with devising, prosecuting, or overseeing endeavors on the briny main. It will adorn my bookshelf from henceforth.

So much for the overall verdict. Let me share two big takeaways I culled out of Toward a New Maritime Strategy. First and foremost, this is a venture in self-knowledge. Take it from the ancients: that’s important. Know thyself, commanded an inscription at the entryway to the Greek temple at Delphi, where supplicants went to ask counsel from the god Apollo.

Knowing who we are as the seafaring arm of American foreign policy will alert us to habits of mind and patterns of behavior that prevail within the services. In so doing it helps us glimpse our future while alerting us to pitfalls and obstacles we’re apt to confront. Knowing ourselves is half the battle, as a Chinese sage of famous memory once advised.

Which is a roundabout path back to Haynes’s treatise. As the title advertises, the book is about strategy-making since the fall of the Soviet Union. The author, however, starts by delving into the prehistory to today’s strategic debates. He traces the maladies he discerns to the Cold War’s early days as much as to its endgame. Enamored of its tactical and operational success in the Pacific War, deprived of a peer adversary, and with the U.S. Air Force clamoring for an outsized share of the defense budget for the atomic age, the navy leadership in effect lost its vocabulary for thinking about and debating maritime strategy.

This was an unintended consequence of change in the marine surroundings. The navy commenced deployments around the Soviet periphery unbidden in the immediate post-World War II years. The proportion of sea time in a mariner’s career swelled as a result, making “sustained superior performance at sea” the benchmark of excellence—and thus of promotions, awards, and all manner of good things.

However healthy it may be for seamanship and tactical skill, sea duty affords little leisure for studying larger matters such as diplomacy and strategy. Other factors—the mania for scientific-technical disciplines, increased stovepiping between the surface, submarine, and aviation communities, and on and on—only compounded the career penalties besetting would-be strategic thinkers.

But it can be a bad thing—as the greats attest. “To change anything in the Na-a-vy is like punching a featherbed,” as Franklin Roosevelt reportedly exclaimed while serving as assistant secretary of the navy during World War I. “You punch it with your right and you punch it with your left until you are finally exhausted, and then you find the damn bed just as it was before you started punching.”

Or as FDR’s secretary of war Henry Stimson joked after World War II, “the peculiar psychology of the Navy Department … frequently seemed to retire from the realm of logic into a dim religious world in which Neptune was God, Mahan his prophet, and the United States Navy the only true Church.”

In Roosevelt’s and Stimson’s spirit, Haynes suggests that navy culture worked against higher-order thought long after the war. Indeed, this failing constitutes a recurring theme as he examines strategy-making efforts spanning from the 1980s through the triservice 2007 Cooperative Strategy for 21st Century Seapower. His account of these enterprises—which gave rise to directives bearing titles like …From the Sea and Sea Power 21—is worth perusing at length.

Second, Haynes attests to the hazards of placing inordinate faith in the social sciences when drawing up strategy and designing forces. Exhibit A: the 1991-1992 Naval Force Capabilities Planning Effort. This was the project that resulted in …From the Sea, the navy’s first post-Cold War statement of how it viewed the surroundings and intended to manage them. The planning effort convened a group of senior U.S. Navy and Marine officers and civilian academics.

Group members based their deliberations largely on the “Manthorpe Curve.” This graph, the brainchild of then-Deputy Director of Naval Intelligence Bill Manthorpe, represented an attempt to foretell how the strategic environment would evolve over the coming twenty years. Captain Manthorpe based it on his study of the past, looking at patterns of rise-and-fall and regional flare-ups. He forecast turbulence following the Soviet collapse, intermittent regional threats, and the rise of a potentially hostile empire around 2011.

Schools of thought coalesced around these three intervals: Cold War aftermath, midterm regional troubles, advent of a new peer competitor. Those worried about managing the transition to the post-Cold War world coveted large numbers of inexpensive constabulary-like platforms. Carrier aviators and a few fellow travelers called for pummeling rest-of-world threats selectively to keep them from mutating into global problems. Submariners beseeched the sea services to husband their technological edge, investing in top-end platforms—like attack and ballistic-missile subs—that it would take to face down another Soviet-caliber antagonist.

Such are the demands on a global sea power that feels obliged to manage the system of international trade and commerce, keep a lid on regional troublemaking, and discourage a Eurasian hegemon from challenging the international order it leads.

But isn’t strategy the art of staying in tune with the times? Why not realign strategy and forces to cope with immediate problems rather than hedge against a great-power struggle that may never come? That’s what some members of the Naval Force Capabilities Planning Effort urged. And indeed, …From the Sea in effect codified this view, proclaiming that the U.S. Navy could afford to focus on projecting power ashore because no one threatened its command of the sea.

Yet adapting to new, less trying circumstances is imprudent when it wrong-foots efforts to meet foreseeable challenges of greater consequence later on. For this observer the message that leaps out from the Manthorpe Curve is this: history granted post-Cold War America only a short respite—in historical terms—before the onset of the next great-power challenge. It was imperative to start getting ready then. It takes a long time to regenerate advanced weaponry and adept users—the lineaments of combat power—once those resources lapse. By adapting then, the naval leadership let the material and human capacity for readapting languish.

Think about it from the vantage point of 1991-1992. The generation of commanders destined to face Manthorpe’s next big thing circa 2011 was already in uniform. They were junior to mid-career officers. Having them unlearn the skills and habits needed to wrest maritime command from a serious foe was a decision of colossal moment.

Ships, aircraft, and armaments to wage the new struggle needed to be dreamt up, built, and tested to be ready when a new rival came on scene—meaning now. We’re now scrambling to reinvent capabilities—long-range anti-ship missiles, among many others—that atrophied when history ended a quarter-century ago. Others have disappeared without replacements.

Such insights are scattered throughout Toward a New Maritime Strategy. Lastly, it’s a book reviewer’s sad but sacred duty to join the nattering nabobs of negativity—that is, to find some fault with the work under review. One quick but significant critique. Maritime strategy is about more than naval strategy. It’s even about more than a navy and its corps of sea soldiers. Haynes can be taken to task for neglect on this point.

For the United States, any genuinely maritime strategy should encompass the U.S. Coast Guard, whose commandant, after all, was the third co-signer of the 2007 Maritime Strategy. Yet this sister sea service is largely invisible in Haynes’s account. The tension between this book’s title and subtitle is revealing: Toward a New Maritime Strategy, but American Naval Thinking in the Post-Cold War Era.

There’s more truth-in-advertising in the latter than the former. What was that hybrid constabulary/combat service doing during the era under study, how did its leadership contribute to the making of the Cooperative Strategy, how does the strategy shape its operations, and how does coastguardsmen’s maritime thought resemble and differ from that of fellow seafarers? What changed after 9/11, when the U.S. Coast Guard became an arm of the newly created Department of Homeland Security?

More attention to the coast guard, in short, would have enriched Haynes’s commentary while imparting a truly maritime flavor to it. But I quibble. Opinionated as it is, this book may win Peter Haynes few friends within the naval establishment. One hopes it influences people, nevertheless—reacquainting the services with their cultures, strengths, and foibles as they reenter a competitive age of sea power. Read it.

James Holmes is professor of strategy at the Naval War College and senior fellow at the University of Georgia School of Public and International Affairs. A former U.S. Navy surface warfare officer and combat veteran of the first Gulf War, he served as a gunnery and engineering officer in the battleship Wisconsin, engineering and damage-control instructor at the Surface Warfare Officers School Command, and military professor of strategy at the Naval War College. His most recent books (with long-time coauthor Toshi Yoshihara) are Strategy in the Second Nuclear Age and Red Star over the Pacific. Designated an Atlantic Monthly Best Book of 2010, Red Star over the Pacific has been named to the Navy Professional Reading List as Essential Reading. The views voiced here are his alone.

4 thoughts on “Toward a New Maritime Strategy”