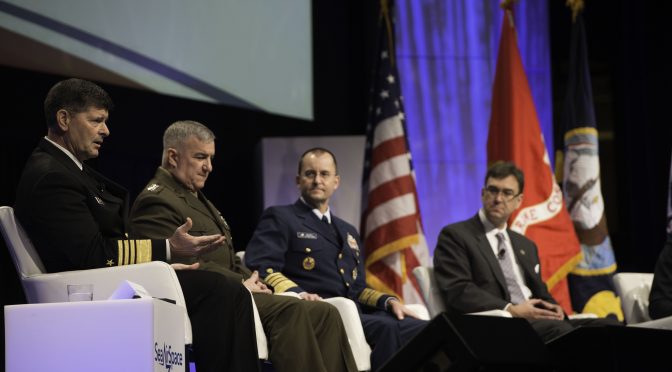 From the White House to the Pentagon, the message is clear. The world of 21st Century great power competition has arrived, and it is distinctly different from the one today’s U.S. national security enterprise was designed to confront. Now is the time for every agency, department, and service in the executive branch to ask itself hard questions and consider decisive change.

Nowhere is the imperative for introspection more acute than in the U.S. Navy, Marine Corps, Coast Guard, and Merchant Marine. They are the sea services responsible for sustaining American sea power; their forces the guarantors of maritime superiority for a maritime nation. Moreover, their leaders are the custodians of the national assets most threatened by the rise of China and Russia as new global rivals in the maritime domain.

With this in mind, it is time to consider whether the emergent norms of this new era of great power competition also warrant a campaign to rethink the functions and missions of these sea services. Is now the time for a new maritime strategy for the United States?

The answer is yes. Three hard questions point to why.

What Will We Do if the Lights Go Out?

The sea services have always been on the nation’s first line of defense against threats to national interests and on the first line of response to disasters at home and abroad. Traditionally this has taken the form of sustaining and guarding physical sea lines of communication (SLOCs) that connect the United States to other maritime nations, while exercising readiness to project military power or render disaster response to physical crises around the globe.

The current maritime strategy of the United States bins these roles into five enduring functions – deterrence, sea control, power projection, maritime security, all domain access – and promotes seven naval missions – defend the homeland, deter conflict, respond to crises, defeat aggression, protect the maritime commons, strengthen partnership, and provide humanitarian assistance/disaster response. Anyone capable of tracking their way through these lists as they read the document is then offered a tour of U.S. maritime capabilities as they relate to each of these functions and roles. En route, they will find sound justification for everything the sea services are doing today. What they will not find is precise direction on how they should change to confront the future of maritime competition.

This is a problem. China and Russia are both developing capabilities that could fundamentally change the character of contests at and from the sea.  They are investing in unprecedented capacity for new means of physical and digital coercion. Russia brands it Information Confrontation. For China, it is Low Intensity Coercion and Intelligentized Warfare. Each involves developing sophisticated offensive cyber doctrine, investments in high-end electromagnetic pulse weaponry, and capabilities to disrupt critical communications architecture around and beneath the sea. In early phases of escalation or conflict, it is fully plausible either rival could disrupt civil communications, impair digital infrastructure, and impede electrical services across large swaths of the United States.

The implications for the future sea services are profound. Each must prepare to defend against digital coercion by maritime rivals and to protect new digital SLOCs for future maritime operations. What are the means by which the sea services could align with other national instruments of power to deter such coercion in peace and in war, and what could each sea service offer the nation in the worst-case that deterrence fails? Could the Navy and Merchant Marine deliver power-generating capacity and internet services from the sea? Could the Coast Guard help reestablish communications between coastal U.S. hubs? Could the Marine Corps help rebuild and defend critical digital nodes and infrastructure? Who would repair the undersea cables and defend them against further attack? In sum, the sea services need a strategy that evolves beyond today’s functions and missions, and toward defining future means to protect America against 21st Century coercion and be ready to respond if the lights go out.

What if the Oceans Turn Transparent?

One of the tenets of naval strategy has always been the vastness of the world’s oceans. There has traditionally been so much water, with so much activity occurring within and around it, that it was inconceivable any nation could capture and make sense of it all. Any ship at sea was not just the proverbial needle in a haystack. It was a moving needle among hay that was tossing, turning, and even inhabited.

The best navies in history have applied this tenet to their advantage. They developed navigational and communications techniques to maintain the edge over rivals in knowing where their ships were among others in the haystack, along with the fastest ships to traverse the open ocean swiftly or furtively. Maintaining that part has always been hard, demanding continual progress in command, control, and communications technology in platforms built to leverage every boundary of physics they could challenge. On the other hand, hiding has historically been easy. It has been a matter of either knowing where to hide in the ocean’s multi-layered domain or reducing physical signature enough to look like other needles or hay in the stack.

For the first time in history, there is evidence that this may all be about to change. With the emergence of a globalized sensor-based economy, the world is on track to host more than 50 billion “smart” devices and one trillion digitally connected sensors by the early 2020s. Of course those won’t all be sensing the maritime domain, but many will be.

They will be mass-manufactured in a host of sizes and configurations and employed on long-endurance drones on and above the ocean’s surface, in nano- and micro-satellites in space, or scattered along the coasts and sea-bed. They will be employed in abundance on military, commercial, and possibly even biological platforms; collecting, deciphering, and transmitting the data of the seas.

For the aggregators of this data, virtually everything in the haystack could be visible – critical portions of the oceans will be effectively transparent. Yet that is only half the problem. Development and operationalization of Artificial Intelligence (AI) and autonomous systems, alongside advances in quantum computing and radar, offer the promise of harnessing machine processors to discern patterns in the data such that nearly every needle can be found, or at least rendered probabilistically present, with greater accuracy than humans have ever achieved.

The impact on the future sea services will be immense. Postures of passive defense will no longer be enough to protect their assets at sea. Is the United States ready for a fight in which the competition for sensor saturation and AI dominance is a core determinate of victory at and from the sea? Are the sea services prepared for an operating environment in which maneuver among rival maritime forces becomes an active game of confounding the predictive analytics of rivals and finding novel ways to hide in the clutter of the oceans’ dynamics? And perhaps of greatest concern, what if the transparency extends below the sea surface and the Navy’s undersea contribution to the U.S. nuclear triad is someday laid bare? Is it worth a strategic hedge such as diversifying employment of strategic weapons and high-yield tactical missiles onto surface combatants, carrier-launched aircraft, or in extremis even container vessels of the Merchant Marine? In sum, the sea services need a strategy that addresses holistically how to sustain American sea power if the oceans turn transparent.

How can We Mobilize a Digital Maritime Nation?

Since the War of Independence, America’s leaders have recognized that they are responsible for a maritime nation. Yet how to convey that in policy has not always been self-evident. During the inter-war years of the 1930s, as now, the U.S. Government witnessed an escalation of competition among maritime rivals on a scale that had never been seen before, enabled by technology that was fundamentally changing the character of contests between them. National leaders at the time knew the United States had an edge in industrial production and innovation, but they did not know how to mobilize it for a global fight.

In response, the President and Congress passed the Merchant Marine Act of 1936, establishing a Maritime Commission. It was a federal body directed and authorized to chart the mobilization of an American maritime nation for the level of global competition and contest it saw on the horizon. By the 1940s, when those contests turned to war, the nation had at least thought through what was needed in the months and years ahead.

America remains a maritime nation but is now a digitally interdependent maritime nation in a digital age. This is something new. Wall Street and the solvency of the Federal Reserve are nearly as reliant on foreign digital market transactions as they are on U.S. investments.  The nation’s most powerful and valuable firms are corporations with legal, digital, and human elements that span the world. And U.S. universities – the engine of digital and industrial ingenuity – are digitized global enterprises unto themselves.

The significance for the sea services is dramatic. They need to think through how to secure America’s national innovation complex and defend its intellectual edge in a world of commoditized data and information. They merit collective contingencies to mobilize the industrial giants of the Fourth Industrial Revolution for sea power competition on behalf of America and our Allies. What will be the legal and financial terms under which the services of Amazon, Microsoft, Google, Apple, Space-X and others are commissioned should today’s contests turn to war? Is it time to reconsider standards and terms of selective service for the Digital Age? Do the sea services need new authorities to explore, resource, and test innovative concepts for burden sharing in the event of mobilization? In sum, there should be a strategy to articulate a national vision and lay the foundation for mobilizing a digitized America for the digitized contests on the horizon.

These are the first of many questions the U.S. sea services should be asking, but the questions are just the start.  Collectively, the services need answers, and they need them fast in order to beat emergent maritime rivals to the future. Equally important, these answers must align across national maritime authorities – public and private, agencies and services, U.S. and Allied – to ensure they all get there together.

In short, they need a new U.S. maritime strategy for a digital age.

Frank Goertner is a Commander in the U.S. Navy. His most recent assignment was as a Strategic Planner for Future Fleet Design and Architecture in the Office of the Chief of Naval Operations, Future Strategy Branch. The views and opinions expressed are the author’s alone and do not represent the official position of the U.S. Navy, U.S. Department of Defense, or U.S. Government.

One thought on “Three Hard Questions for U.S. Maritime Strategy in a Digital Age”