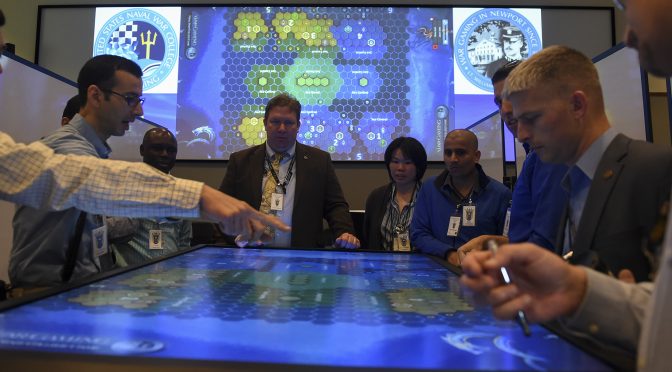 Wargaming is ubiquitous throughout the U.S. Armed Forces as a tool for research, education, training, and influence. It is a flexible tool, adaptable to different scenarios, purposes, and levels of war. It is in this last arena, levels of war, that gaming organizations and their sponsors can bump up against the limits of wargaming.

The inherent nature of wargaming requires delineation and focus in game objectives and design. A game to address all three levels of war, strategic, operational, and tactical, is simply not feasible, requiring too many players, too much money, and too much time. The normal approach is to pick a level of war to play, with the other levels being either scripted, managed by the control cell, or ignored altogether. Even when a game is designed to incorporate free play at two levels, some kind of pruning of factors – frequently time – must occur to make the game feasible within budget and schedule constraints. The net result is that a robust exploration of the relationships among the levels of war becomes a casualty, missing in action.

Among the consequences of this gap in gaming could be a failure of communication and coordination among policy, strategy, and operational decision-makers, such as occurred in Vietnam and Iraq. This series will discuss the nature of this gaming gap and will offer some suggestions for closing it.

The doctrinal partitioning of war into three levels in the U.S. is a relatively recent occurrence. The Army’s 1982 Field Manual 100-5 Operations introduced the notion of an operational level in between strategy and tactics.1 The operational level, according to doctrine – and subsequent practice – is the level of command at which campaigns and major operations are planned and directed. This doctrinal development simply provided a theoretical basis for a command structure that had existed since World War II. Between fighting units and their direct commanders in the field and at sea, there were established theater headquarters that not only oversaw, coordinated, and supported large and widely dispersed forces, but also coordinated theater strategy – the campaigns – with the national command authorities in Washington. In WWII the emergent arrangement in which theater commanders such as Eisenhower, Nimitz, and MacArthur worked with an ad hoc joint staff that consulted routinely with President Roosevelt worked well enough in the context of a total war against the Axis. Deft political management during the war and especially in the end game produced, if not a perfect post-war world, at least good outcomes in West Germany, Italy, and Japan. Operations were governed by strategy, set in Washington, which was where political and military feasibility met.

After the war, the U.S. established a permanent globe-girdling theater command structure to coordinate a potential global war versus the Soviet Union, manage the geopolitical strategy of containment, and execute the oversight and support of limited wars that broke out, such as in Korea and Vietnam. The problem, as compared to World War II, was that those wars were conducted in the shadow of the U.S./USSR nuclear standoff, thus taking certain military options off the table. Moreover, those two wars and all subsequent ones were fought for limited objectives. These factors called for a more detailed interaction among policy, military strategy, and operations than was required in World War II. Sometimes this resulted in micromanagement, as in Lyndon Johnson’s approach to bombing in Vietnam. After that war, the services, especially the Army, embarked upon an effort to revamp their doctrine and cultures, including the notion that Washington should delegate more authority for running operations to theater commanders. The development of the operational level of war aided in this change.

However, the development of operational art as a key pivot of U.S. military doctrine had the effect of turning theater commanders into regional military “proconsuls.”2 This served, in the view of two Army War College writers, to drive a wedge of sorts between strategy (to include the policy side) and operations (the conception and design of campaigns) to the point where it “… reduced political leadership to the role of ‘strategic sponsors,’ quite specifically widening the gap between politics and warfare.”3 Others have attributed the inability of the United States to achieve definitive victories since 1945 to defective strategic leadership in Washington.4 Both problems have infected U.S. strategy since at least Vietnam, being perpetuated by a gap in understanding of the connections between operations and strategy. One manifestation of this gap is in the vulnerability of administrations to the lure of what might be termed “sure fire” victory concepts.

Since at least the dawn of the air age there have been warfare prophets that assert in an a priori manner that particular technology-based concepts, like strategic bombardment or network-centric warfare, will confer an unassailable advantage to their users and produce rapid victory. Such concepts are alluring to political decision-makers that find themselves under pressure to resolve a vexing international dispute on favorable terms. Skeptics have a difficult time countering the claims of adherents, since there usually exists no historical counter-evidence as the concept and its supporting technology are new.

The most notorious recent example is the 2003 invasion of Iraq. The policy/strategy framework for Operation Iraqi Freedom (OIF) was founded upon Defense Secretary Donald Rumsfeld’s notion that new technology would produce “shock and awe” and allow the invasion to be carried out with far fewer forces than had participated in 1991’s Desert Storm. “Faster, lighter,” were his buzzwords, and he believed intelligence and hi-tech gadgetry would play a more important role in future conflicts than boots on the ground.5 Blatantly missing from the strategy was any plan for establishing order after Baghdad was captured, which resulted in chaos and an eight-year counterinsurgency operation. There were indeed people in the national security community that advised caution based on the politics of using military force, such as former Central Command commander Marine General Anthony Zinni and Congressman Ike Skelton, who advised the administration that they should not take the first step without considering the last.6 However, their concerns fell on ears deafened in part by the administration’s idea that the war would be quick and easy.

The susceptibility of both civilian and military strategists to the siren song of new, unproven concepts occurs in part because of a widespread ignorance of the interactions between policy, strategy, and operations. Apart from Congressman Skelton’s injunction not to start a war without considering how it might be brought to an end – and the aftermath – there is little in the way of guidance in the literature on the matter of how, exactly, the strategic and operational levels interact before, during, and after a war. In fact, there are reasons to think that it may not be possible to develop a set of principles or rules of thumb on the matter. As Carnes Lord pointed out:

“The fundamental problem facing American proconsuls is that political and military decision-making are institutionally split. This remains the case in spite of the significant reforms put in place after World War II, especially the creation of the National Security Council. Today, after ten years of war and continuing pressures to improve the integration of the political and military dimensions of American counterinsurgency operations in the Greater Middle East, there remain significant disconnects and tensions between a civilian leadership that is increasingly without military experience and a military establishment (embracing civilian professionals as well as the uniformed military) that is increasingly competent to deal with security-related matters beyond the narrowly military sphere.”7

In other words, it may fall increasingly on the military to reconcile the gap between strategy and operations, a solution far from optimum but likely better than ignorance of the strategy/operations relationship in both Washington and the field. Wargaming is deeply institutionalized within the military, so it is within the military gaming process that education and analysis of the relationship must at least start to occur.

To close the existing gap, national security practitioners, uniformed and civilian, should develop a feel for the dynamics of these interactions such that they can approach decisions to go to war, war strategy, campaign design, and post-war arrangements much more sagaciously. Widespread inclusion of such an interface in wargaming would help close the gap.

[5] Richard Saunders, “The myth of ‘shock and awe’: why the Iraqi invasion was a disaster,” The Telegraph, 19 March 2013, http://www.telegraph.co.uk/news/worldnews/middleeast/iraq/9933587/The-myth-of-shock-and-awe-why-the-Iraqi-invasion-was-a-disaster.html