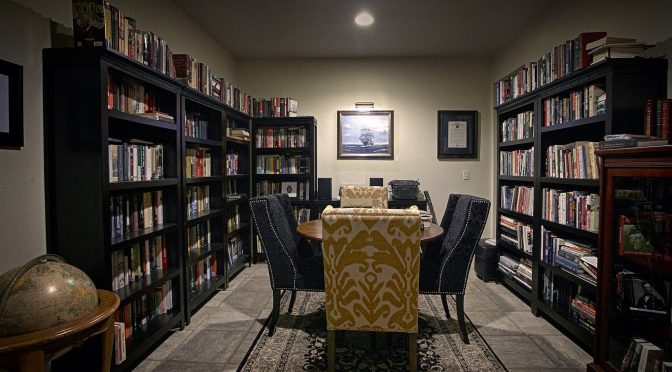 “Reading has the power not only to demolish time and span the ages, but also the capacity to make one feel more human — human meaning at one with humanity — and possibly less savage.”

“After owning books, almost the next best thing is talking about them.”

Some years ago I met Admiral Jim Stavridis. The conversation, while short, turned to books. If I recall, it was in Stuttgart, Germany, sometime around 2010 or 2011. Because he was the Supreme Allied Commander Europe and the U.S. European Commander (EUCOM), he had to divide his time between two locations: his NATO headquarters located near Mons, Belgium and his EUCOM headquarters in Stuttgart, Germany. At the time, I worked in the intelligence directorate at EUCOM when we heard he was coming by to meet the staff.

It was a gray, overcast afternoon when he arrived. He promptly made his way down a long line of officers and enlisted, each of them posed to shake his hand and say a few words. I had only a few seconds to make a connection—to say something interesting or ask him a question. But this I knew: I loved books; he loved books; and while standing there, I thought of something he wrote that might prove that I, like him, believed that books are essential to our profession, if not our lives.

Months prior, he had written one of his regular blog posts. In it, he said that his wife noticed that his love of books and his growing library had evolved into a “gentle madness.” That phrase—a “gentle madness”—refers to a wonderful book by author Nicholas Basbanes. Basbanes’ book—A Gentle Madness: Bibliophiles, Bibliomanes, and the Eternal Passion for Books — is a long, discursive work: one part discussion of historic book culture in America and Britain, the other full of profiles of quirky and dedicated book lovers and collectors.

When the admiral finally reached me, I mentioned the blog post and the book. His eyes lit up and he said something about few people knowing the reference. He then told me he owned 4,000 books. Surprised, I said something about wanting a library that large. He then simply said, “You’ll get there.” The conviction in his voice floored me. I believed him. And he was right. I’m getting there (the featured image of this post is a picture of my library; today I have around 2,000 titles, give or take).

Fast forward a few years and, no surprise, the admiral’s library has grown. Stavridis, in the introduction to the entertaining The Leader’s Bookshelf, says that he has in his “house today… more than four thousand books.” His wife, Laura, “has spent far too much of her life packing and unpacking them in postings all around the world.”

Stavridis and his co-author, R. Manning Ancell, have written a book that is somewhat similar to Richard Puryear’s fine book—now unfortunately out of print—American Admiralship: The Moral Imperatives of Command. Puryear interviewed 150 four star admirals on a variety of topics. One of those topics was the importance of reading. And like Puryear, Stavridis and Ancell take a similar path. In The Leader’s Bookshelf, they interviewed 200 four-star generals and flag officers, and from those discussions, they determined the 50 books that “stood out most…with top military readers.”

Using no particular scientific method, they rank ordered the books in descending order by the number of mentions. Thus, the first book on the list, Michael Shaara’s The Killer Angels (1974), was mentioned most often. While the last on the list, How: Why HOW We Do Anything Means Everything by Dov Seidman, was mentioned least frequently.

For each title, there is a short essay by a senior officer as to why they choose the book, followed by a quote from the book, a biography of the author, then a summary of the book by either Stavridis or Ancell, concluding with a few sentences about why the book is important for leaders today.

For folks that regularly follow the reading lists that are published by the Chief of Naval Operations or the other services, there are, unfortunately, few surprises. The regularly cited titles appear: Anton Myer’s Once an Eagle, Sun Tzu’s The Art of War, Clausewitz’s On War, John Keegan’s The Face of Battle, E.B. Potter’s Nimitz, and the always popular Steven Pressfield with his Gates of Fire. They all made the cut.

While there is nothing wrong with the oldies but goodies, it was refreshing to see some unusual—or rather, some outliers—find a place in the top 50. Mark Twain’s A Connecticut Yankee in King Arthur’s Court makes a showing as does Norman Mclean’s A River Runs Through It. In fact, General Stan McChrystal is the senior officer that recommended Twain’s satirical novel about a man from the 19th century, Hank Morgan, traveling back in time to King Arthur’s court.

The Leader’s Bookshelf, I confess, would be ho-hum if not for the additional essays that Stavridis and Ancell add to the book. It is these essays on publishing, reading lists, and building a personal library, that raise this book from mediocrity to must have. And here, Robert Ancell pulls his weight, adding a nice cherry on top with an interview with General Mattis.

Mattis beats Stavridis in the book department. With some 7,000 titles on his shelves, he probably is the best read military leader—retired or active—out there. In the interview, Mattis mentions books that apply to each level of war. Of note, he recommends Lucas Phillips’ book The Greatest Raid of All. A book about a British raid that shattered the Nazi’s dry docks at Saint-Nazaire, France during World War II, preventing the Germans from using the docks for large battleships for the duration of the war. The raid resulted in no less than five Victoria Crosses. I had never heard of the book nor the raid. It is these little-known reading recommendations that make books like this exciting. You simply do not know what you might find.

Ironically, the only criticism—or rather, observation—I have about the book is that senior officers still do not carve out enough time to read. And this in a book in which one of the early essays is about “Making Time for Reading.”

In one essay, a senior officer admits that while working in the Joint Staff that he only read one book in a year. One book! While another, in her recommendation, wrote only two sentences to praise the work—and even then those two sentences were footnoted. Sigh.

Nonetheless, The Leader’s Bookshelf will appeal to all types: The newbie looking for a good book to read and the bibliomaniac who may have read all 49 on the list and owns each first edition, but unaware, or didn’t realize there was just one more interesting title out there.

But alas, there always is.

Lieutenant Commander Christopher Nelson, USN, is an intelligence officer stationed at the U.S. Pacific Fleet Headquarters in Pearl Harbor, Hawaii. The views here are his own.

Featured Image: A picture of the author’s personal library. Courtesy of Christopher Nelson.