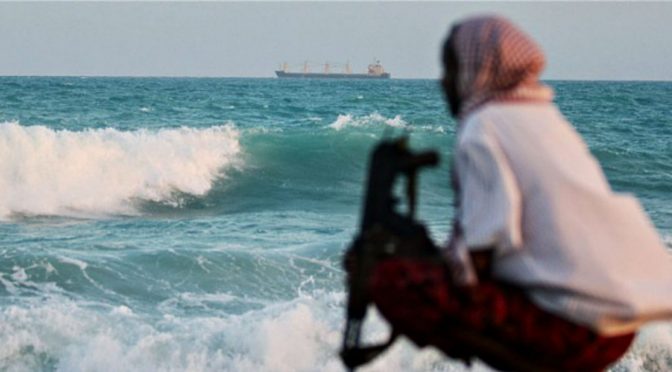 Late Monday, crew on the Emirati-owned oil tanker Aris13 activated a distress call indicating they were being pursued by pirates off the coast of Somalia. The subsequent hijacking, once confirmed, would mark the first successful Somali act of piracy since 2012. This of course begs the question: Is Somali piracy back?

The answer is probably yes; also probably no (forecasting is a bad business to be in these days). Credible arguments could be made in either camp. Here I’ve chosen to explore some of the key points on either side.

Is Piracy in Somalia is Making a Comeback?

When Somali piracy spiked in the late 2000s, the international community was fairly quick to respond. Somalia sits alongside some of the most important shipping lanes in global trade, and precipitously close to three maritime chokepoints: the Suez Canal, Bab el-Mandeb, and the Strait of Hormuz. Rising insurance premiums for shipped goods and the market-wide consequences of scares to the free flow of oil made addressing piracy off the horn of Africa an issue of importance for many navies. One of the largest such engagements was operation Ocean Shield, NATO’s contribution to counter-piracy. Ocean Shield and related efforts, like EU’s operation Atalanta, were heavily credited with the dramatic reduction in Somali piracy that followed. As Rear Admiral Terry McKnight (USN, Ret) notes, though after years of no successful attacks, Ocean Shield was suspended at the end of 2016. If the deterrent effect of NATO and other warships in the region was indeed primarily responsible for suppressing Somali piracy, the minimization of that deterrent could be credibly seen as providing an opening for resurgent piracy.

At the height of regional piracy, a CNA study warned that “the resilience of the pirate enterprise should not be understated.” Four years later, that cautionary note remains relevant. First, it should be noted that piracy rarely just disappears. Like any crime, eradication is an unlikely end state. That is the case off Somalia as well. Even though attacks were unsuccessful after 2012, a small number of attempted attacks were reported in the Gulf of Aden in 2013 (6) and 2014 (4). Attempts by Somali pirates in the Red Sea were also reported in 2013 (2) and 2014 (4), while attacks closer to Somali waters occurred in 2013 (7), 2014 (3) and 2016 (2). These numbers are orders of magnitude smaller than in previous years, and gaps in attacks in 2015 tell a remarkable story. For all those reasons we could look at those numbers and conclude this most recent alleged attack is an outlier (and in truth it likely is, I suspect). Nevertheless, as per the International Maritime Bureau (the organization that actually collects all this information), the attempted assaults in 2016 indicate that the “capacity and intent to attack merchant shipping still exists off Somalia.” Lingering institutional knowledge means that a resurgence is not impossible. Closely linked to this point is the idea that (like other types of crime) piracy may have a contagion effect. A successful hijacking now could produce copycat attempts, the success or failures of which would have significant consequences for the overall trajectory of regional piracy. 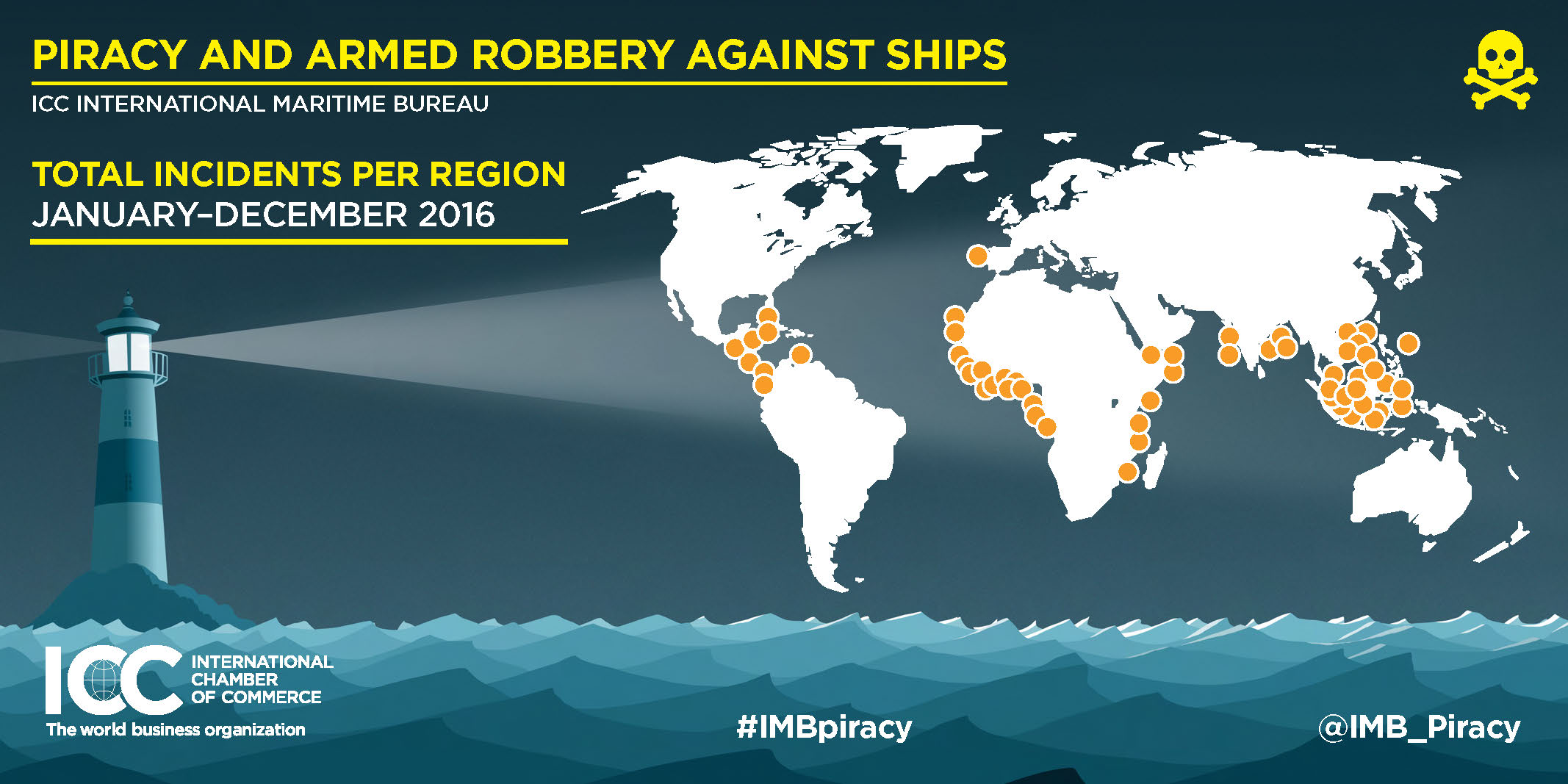 Of course, it is now almost a cliché to note that piracy is ultimately solved on land, not at sea. Suffice it to say that, despite apparent gains in power consolidation, Somalia remains quite clearly a country in search of greater stability (it was the top ranked state in the most recent Fragile States Index report). Like the pirate havens of lore, ungoverned spaces will always run the risk of attracting maritime criminality.

Is Piracy in Somalia is Gone for Good?

The numbers reflected above speak in large part for themselves. Piracy in Somalia, for several years now, has been as close to nonexistent as is practicable. One incident does not make a convincing trend.

Moreover, while a decline in anti-piracy-tasked warships is important to note, other deterrents continue to play an important role. In addition to a remaining naval presence, shippers also developed myriad means of combatting piracy. Embarked armed security is a very credible threat, while passive security measures (watch Captain Phillips), and best management practices (like better reporting standards) all likely contributed to declines in piracy rates and remain just as relevant today as in 2012.

Some systemic arguments are harder to make with certainty but are also worth noting. Unlike piracy in the Gulf of Guinea or parts of Southeast Asia (Indonesia, notably), Somali piracy was remarkably organized (i.e. not opportunistic). A wide-scale resurgence in Somali piracy, in the vein with which we are familiar with it, would mean a major retooling of operations for the regional transnational criminal organizations (TCOs) that provide a backbone for piracy’s infrastructure (bank accounts, negotiators, financiers). Like most TCOs, it is likely that Somali gangs have diversified to survive, perhaps branching into weapons smuggling or, as a report from 2012 suggests, kidnapping foreigners on land. Making the switch back to piracy is far from impossible, but could run into bureaucratic resistance (even criminals have bosses).

Globally, piracy has also just hit its lowest rates in 18 years. And when you get deeper into the details, the numbers don’t not look ripe for a Somali resurgence. Overall piracy attempts are down, including hijackings, which are the typical type of attack employed near the horn of Africa. What is up are kidnappings, seen increasingly in Nigerian piracy (which is still very active). Indonesia, meanwhile, saw a large decline in piracy, but still owns a substantial portion of total attacks, almost all of which are simple and opportunistic. If global numbers can say anything about a specific region (which is admittedly a big ‘if’), one potential takeaway is that opportunistic piracy and hit and run kidnappings are (for now) more viable tactics than those that Somali pirates usually employed.

There is more to this conversation to be sure. Historically, claims that Somali piracy was a response to toxic dumping and illegal, unreported, and unregulated (IUU) fishing (the Somali coast guard narrative) struck some experts as an inadequate explanation for the phenomenon. Fishing has not traditionally been a major part of Somali culture or economies, nor were most pirates former fishermen. (That does not excuse the devastation of toxic dumping and IUU fishing, only its ability to causally explain piracy.) In response to this latest incident, however, that claim has resurfaced as a direct cause of the Aris 13 hijacking. Should it prove that fishermen were indeed responding to predations in Somali waters, that could spark a much wider debate once again. Only time will tell whether Somali piracy will ebb or surge. For now, our thoughts are with the crewmembers and their families.

3 thoughts on “Is Somali Piracy Back?”