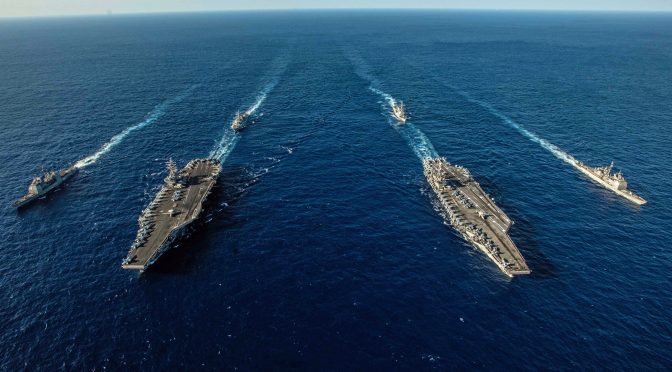 The first article of this series introduced the “Bad Day Scenario,” reminiscent of a similar scenario the Navy considered in 2003. The Navy went on to test its global responsiveness in the surge exercise Summer Pulse 2004. The scenario posited in Part One involves simultaneous reports of a mine strike in the Strait of Bab el Mandeb, a paramilitary invasion of a Turkish town, and a Chinese attack on a U.S. military aircraft.

The Bad Day Scenario pushes the U.S. Navy, even with its global reach, to the brink of mission failure. Even if none of the three flashpoints boiled over into armed conflict, it is questionable whether today’s Navy could posture to deliver desired effects in a timely manner. There is also no true safe haven to be found in the other military branches or U.S. allies. The preferred military response would probably be a joint operation, but the Navy would likely be called upon to act first, if only to begin moving forces into position. Mobilizing naval forces could provide national leadership with decision space before crossing a strategic “point of no return” while achieving a rapid, politically acceptable result. If the Navy, however, could not position capable forces to respond in a given timeframe, such a response would be decidedly less feasible to political leadership.

Nor could the Navy rely on U.S. allies to save the day. First, prudent planning dictates that in a worst case scenario analysis, one should not assume the benefit of allies coming to their aid. Second, although unlikely, unilateral U.S. operations are entirely feasible. American presidents have routinely reserved the right to act unilaterally to preserve vital interests. Meanwhile, NATO is a shell of the military force that once served as a counterbalance to Russian aggression, and much of Europe is preoccupied with economic and domestic issues. Even if European allies could muster the political will to assist in Turkey, it is unreasonable to assume they would have the capacity to support in the Bab el Mandeb simultaneously. In the Pacific, it is possible U.S.  allies would view the downed aircraft as strictly a U.S.-China issue. There could also be murky questions as to the flight profile of the aircraft relative to China’s contentious claims of territorial airspace. However, U.S. allies in the region are far more likely to come to the aid of the U.S. over issues that impact their sovereignty or economy, such as China’s excessive claims in the South China Sea.

Faced with the specter of having to go it alone, the Navy could capitalize on two emerging concepts to tackle the Bad Day Scenario: Dynamic Force Employment (DFE) and Distributed Maritime Operations (DMO). Both concepts have the potential to improve the Navy’s global responsiveness. Integrating DFE and DMO into actual operations and doctrine creates both intriguing challenges and opportunities for the Navy of the future.

Introduced in the 2018 National Defense Strategy, DFE is a concept for employing forces on a global scale in an agile and unpredictable manner. DFE has a significant impact on the Navy by shifting carrier strike group (CSG) deployments away from the routine, almost clockwork, schedules that supported  the wars in Iraq and Afghanistan over the past two decades, and toward a demand-based methodology that could involve shorter or more irregularly spaced deployments to any number of locations based on current events. Among the many changes that DFE will bring, it will immediately impact the advanced training portion of the readiness cycle – ships and strike groups will no longer be able to focus on a predetermined set of threats based on geographic area.

DFE essentially addresses the timeliness aspect of the Bad Day Scenario. It is designed to maximize the probability that forces will be available to respond to global crises and contingencies. It sacrifices presence for responsiveness and agility.

Forward staging forces around the world on rotational deployments provide presence, but this approach has gradually degraded force readiness over the past two decades. In addition, there’s no guarantee forces are deployed where the next crisis will ignite, and it may take just as long for them to reposition as it would for them to deploy from CONUS. Instead, DFE uses responsive deployments. Forces deploy when and where they are needed, and when deployed, they can extend their presence on demand and far more easily than a unit coming off a long deployment.

The value of DFE’s agility is highlighted in the Bad Day Scenario. Under the traditional force employment paradigm, an east coast-based CSG would typically deploy to the Arabian Gulf. From there, it would take nearly as long to respond to the Turkey incident as a CSG in homeport, plus the time, risk, and resources incurred by transiting a potentially mined chokepoint in the Bab el Mandeb Strait or even the Suez Canal. DFE eliminates the “default” deployment to the Arabian Gulf, and increases the likelihood of east coast-based forces being allocated to the European region (6th Fleet), poised to respond to the Russian aggression in Turkey. Forces in the Middle East (5th Fleet) would be preferable to CONUS-based forces to respond to the mine strike in the Bab el Mandeb Strait. However, the unique defensive and force protection challenges of the region (e.g. anti-ship cruise missiles, explosive boats, lethal unmanned aerial vehicles) require capabilities that 5th Fleet’s assigned mine countermeasure forces do not possess. As the Navy’s Director of Expeditionary Warfare points out, having the wrong capabilities available is the same as having zero availability. Critical enablers such as Aegis cruisers and destroyers may need to deploy from CONUS after all. DFE forces the Navy to prepare for the possibility of having to rapidly deploy such a package for unique missions like mine clearance, potentially resulting in improved global responsiveness.

Lastly, DFE is ideally suited for the return to an era of great power competition by presenting unpredictability to potential adversaries, such as Russia and China. To be clear, DFE is in some respects a necessary outcome of budget restrictions and the end of nonstop naval air support to the wars in Iraq and Afghanistan. Still, it is heartening to see DoD make a strategic transition so deftly. Instead of shifting default rotational CSG deployments from one area of responsibility (AOR) to another, DoD rewrote the game plan, simultaneously forcing potential adversaries to wonder where U.S. forces will show up next, while also creating operational tempo “breathing room” to help reset the force.

As Tyson Wetzel points out on the Strategy Bridge, there are some potential challenges to DFE becoming an effective force management system. Some Combatant Commanders (COCOMs) could view DFE as a threat to force allocations in their AOR since they have long been accustomed to continuous naval presence. Allies may view irregular deployments as a sign of waning U.S. commitment to their strategic partnerships. Above all else, DFE will remain constrained by overall end strength. No matter how dynamic the Navy is, it is ultimately only as responsive as the number of ships it has operationally available.

One way to overcome the limitations of end strength is to rethink how U.S. naval forces operate once deployed. This is, in part, the logic behind distributed maritime operations (DMO), the successor to Commander, Naval Surface Force’s distributed lethality concept. While a universally accepted definition of DMO does not exist, DMO emphasizes multi-domain maneuver and kill chain agility through incorporating lethality into more platforms, offboard sensors, network-optional C2 (i.e. a blend of mission command and networked operations), and unmanned systems, to name a few. It is an operational concept that guides the Navy toward fielding a force capable of applying efficient, tailored force packages to a wide range of potential missions and threats. To some, it represents a significant departure from the near-myopic focus on power projection ashore via high-end capabilities, such as CSG sorties and ship-launched cruise missile strikes to support land-based operations.

If DFE addresses the temporal aspect of the Bad Day Scenario, DMO addresses the spatial and doctrinal aspects. DMO, in concept, would allow the Navy to respond to multiple contingencies in different regions by operating in a distributed manner. Although the Navy has been slow to adopt DMO (due in part to “organizational inertia” associated with the preeminence of CSG operations), deployed CSGs, amphibious readiness groups (ARGs), and destroyer squadrons (DESRONs) are already accustomed to operating disaggregated units, sometimes even across COCOM AOR boundaries. DMO will theoretically take disaggregated operations to the next level. DMO will allow units to disaggregate and then effectively integrate with other distributed units to produce tailored force packages on demand as the situation dictates.

Specific to the Bad Day Scenario, DMO could improve the Navy’s responsiveness in multiple ways. A group or squadron operating in the Mediterranean or Red Sea could rapidly disaggregate to respond to both the Turkey and the Bab el Mandeb crises. And by building lethality into all platforms, there is a greater likelihood the Navy could respond to any of the incidents with the nearest available assets. With the current force, some otherwise capable platforms, such as the San Antonio-class LPDs, could not respond to the South China Sea incident due to a lack of integrated air and missile defense capability. Offboard sensors and unmanned systems are particularly useful in mine threat areas, which create greater standoff ranges in relatively small littoral areas such as the Bab el Mandeb Strait. DMO can integrate lower-end surface platforms with these capabilities, allowing them to conduct missions such as mine warfare without incurring undue risk or having to wait for the minesweepers to arrive.

While DFE has been rapidly implemented, DMO (and distributed lethality before it) has lingered on the Navy’s operational “whiteboard,” with many supportive ideas and unique definitions coming from across the Navy enterprise. The implementation of DFE benefited from top-down Secretary of Defense (SECDEF) guidance, whereas DMO, on the other hand, began with the Surface Force and had to gain acceptance from the broader Navy and Joint Force from the “bottom up” (or at least from a few steps down). DFE was received as a mandate from SECDEF, whereas DMO has to be sold as a valuable concept, which necessarily takes longer. The lack of a unifying guidance document may have contributed to the delay in widespread acceptance. In order to facilitate implementation, the Navy should prioritize publishing a Naval Warfare or Doctrine Publication (NWP/NDP) on DMO as soon as possible.

The Convergence of DMO and DFE

The advent of DFE, coming from the Joint Force, and DMO, being developed from within, create unique challenges and opportunities for the Navy’s global responsiveness going forward. Ignoring the necessary integration of the two concepts and addressing them in a vacuum could lead to sub-optimal implementation of both concepts, or an unnecessary rejection of one concept in favor of the other. (Likely DMO would be the one to suffer, given SECDEF’s endorsement and rapid implementation of DFE.) Instead, the Navy needs to analyze how DFE and DMO will coexist to maximize maritime warfighting effectiveness. With that comes several key implications which will be addressed in detail in Part 3 of this series.