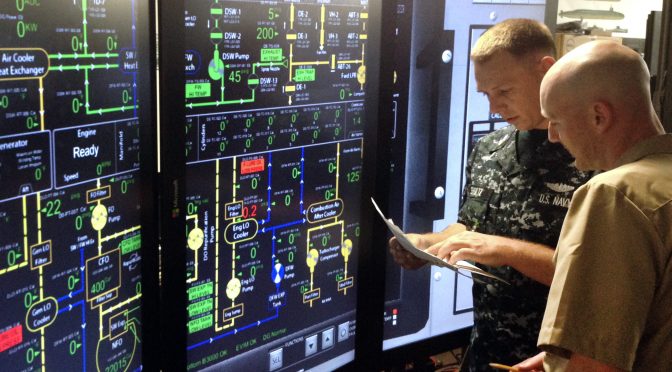 With all of the hype surrounding bitcoin and other cryptocurrencies, it can be difficult to sort through the noise and it might seem trendy to ask the question “How can this technology benefit my organization?” After all, a cryptocurrency started as a joke in honor of dog memes recently achieved a $2B valuation. Still, the underlying technological innovation behind Bitcoin, the blockchain, has real, concrete advantages that can impact numerous industries, from banking to logistics.

Applications in maritime operations are no exception. Blockchain is essentially a distributed database that incentivizes network consensus to make it extremely difficult to alter recorded data. Think of it this way: blockchain is like a museum that offers free entry, but heavily secures each exhibit with anti-tamper systems such that they can only be observed, not stolen or defaced. That so-called “immutability property” makes blockchain useful any time data integrity (i.e. preservation of data) is more important than data security (i.e. privacy of data).

Ideas are already being formulated by the Secretary of the Navy’s Innovation Advisory Council on how blockchain can improve additive manufacturing. Perhaps the most intriguing example of how blockchain can assist naval operations lies in ensuring an accurate recognized maritime picture (RMP). In naval warfare, nothing is more important when forming a kill chain than ensuring one has properly identified the target. RMP is even more critical when relying on networks, and the U.S. Navy has invested heavily for decades to become the world’s preeminent networked force. Blockchain has the potential to solve two of the Navy’s biggest problems associated with building RMP: ambiguity and manipulation. In fact, the broader maritime industry can also benefit from the use of blockchain due to inherent security flaws in the widely used automatic identification system (AIS).

What is a Blockchain?

A brief primer on how blockchains work will help to illustrate how they can impact naval operations. A blockchain used to record financial transactions, called “cryptocurrency,” is perhaps the best example to use. It is a distributed ledger that keeps track of every transaction ever conducted. Bitcoin, the original and most well-known cryptocurrency, relies upon a large network of independent users to prevent “double spending.”  Since cryptocurrency is just data, and not something tangible that is traded for goods or services, it would normally be easy for someone to spend it twice and delegitimize the entire system. Bitcoin’s unique process solved the double spending problem by calling upon its network users to work together to verify each transaction. Bitcoin conducts “consensus building” by offering a prize (currently 12.5 bitcoin) to a randomly selected user helping to verify the latest transaction. Once consensus is built and a transaction is verified, a new 12.5 bitcoin is awarded (i.e. mined) and the transaction is recorded to the blockchain. Each subsequent transaction is built upon the last, making it very difficult to retroactively manipulate data on the blockchain. In fact, the only way for a nefarious actor to alter a previous transaction or record an invalid transaction would be to achieve 51 percent of the computing power on the bitcoin network. For reference, today the world’s most powerful supercomputer, China’s Sunway Taihulight, would comprise just 0.6 percent of the bitcoin network’s computing power, which is growing exponentially.

U.S. and coalition navies rely on secure tactical data networks to share information from a variety of sensors to build RMP. Since RMP is built from the input of numerous, widely distributed users in these networks, they are susceptible to errors like “dual tracks” (i.e. a single ship or aircraft being broadcast to the network as two contacts) or faulty navigational data causing a ship to misreport its own course and speed. These errors can lead to ambiguity in RMP that could lead to critical delays in successfully identifying a threat. Tactical data networks are also susceptible to intrusion and manipulation, no matter how secure they are. Like any cybersecurity system designed to keep unauthorized users out, navies constantly strive to make their tactical data networks more secure against ever more determined adversaries.

Blockchain technology can help navies mitigate the problems of ambiguity and manipulation in building RMP. By building tactical data networks on a blockchain foundation, ambiguity will be resolved naturally as “consensus” develops around new tracks and they are distributed throughout the network. Once consensus is built around a track, blockchain’s immutability property makes it very difficult for subsequent users to clutter RMP with errant data on that track. Likewise, an unauthorized user trying to manipulate RMP by infiltrating tactical data networks will be challenged to alter data on established tracks. Even if a cyber attack attempted to insert new false tracks into the network, specialized blockchain features could be developed to override track data that is not corroborated by friendly sensors. A blockchain that utilizes special features and operates on secure networks is an example of a  private blockchain. Going back to the museum example, a private blockchain is like a museum that employs robust anti-tamper systems on the exhibits, but also restricts entry to museum members only. A disadvantage of a private blockchain is the reduction in available computing power, due to limited users, to ensure data integrity. The cost of rebuilding U.S. and coalition navy tactical data networks from the ground up utilizing blockchain will likely be significant; however, the advantages in data integrity by mitigating ambiguity and manipulation are worth analyzing.

Much as U.S. and coalition navies could benefit from private blockchain, the maritime industry at large could benefit from public blockchain to improve its RMP. Worldwide, mariners use AIS – an open network of ship position, course, and speed data – as a primary tool for building RMP. Implemented in the early 2000s, AIS has been critical to improving safety of navigation. Still, AIS has inherent flaws that blockchain could be used to fix. Because it is open source, AIS data can easily be manipulated to make a ship appear in a different location, report false course and speed, or even mimic another ship’s identity. As Glenn Hayes explains in the Maritime Electronics Journal, AIS “is vulnerable to malicious transmissions and runs the risk of being manipulated by individuals seeking to deceive the system.”  Illegal fishing, piracy, and smuggling are just a few of the reasons one might seek to deceive AIS. As use of AIS spreads, potential security issues will only increase. The data manipulation that AIS is susceptible to is exactly the type of vulnerability that blockchain was developed to address. With targeted funding and industry-wide effort, blockchain can provide data integrity to AIS to improve maritime safety and deter illegal activity at sea.

Another potential application of blockchain in maritime operations could be in supply chain improvements to counter maritime smuggling of drugs, weapons, or any illicit cargo. Lieutenant Junior Grade Henry Bond wrote an insightful article for U.S. Naval Institute Proceedings on the potential for blockchain to protect the DoD supply chain. Lieutenant Bond’s analysis can be expanded to include the global shipping industry. Specifically, smugglers often exploit the inherent difficulties in conducting cargo inspections on container ships by concealing contraband within legitimate cargo in innocuous, unmarked containers. Economic and operational constraints do not often allow for the time it would take to open and inspect hundreds of containers pierside, and physical constraints usually prohibit at-sea inspection. So, to counter maritime smuggling via container ships, navies and law enforcement agencies must focus on deterring the use of containers vice locating illicit cargo in transit. Blockchain portends to act as a potential deterrent by openly and irrevocably recording the status of every container in the supply chain. Essentially, each container could be treated like a “transaction” in the blockchain, so that once it is loaded as part of a legitimate shipment, its status relative to all other nearby containers is “locked down,” making it very difficult to mix in an illegitimate container at a later point. Events like the opening or repositioning of a container could also be recorded as “transactions” to further complicate smugglers’ to conceal illicit cargo.

Ideas like those of Lieutenant Bond or the SECNAV Innovation Board are sound, but they require further development because blockchain is still a nascent technology. DoD, and the maritime industry at large, would do well to assign additional research funding to pursue ideas for applying blockchain in national defense and maritime safety.