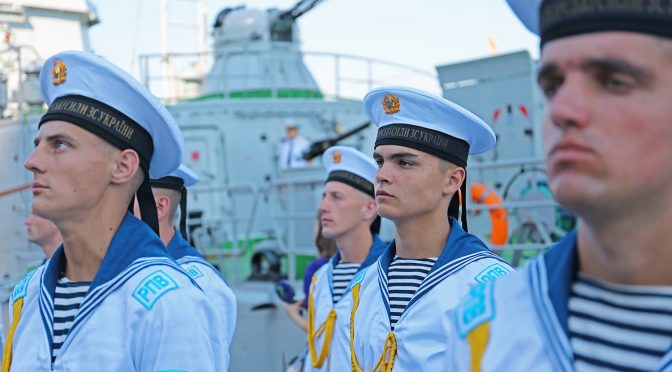 When it comes to U.S. military-technical assistance for Ukraine in the context of Russian aggression, sharing the Javelin anti-tank guided missile with the Ukrainian Ground Forces is what is typically mentioned. And at the beginning of March 2018 the U.S. State Department gave its approval for the provision of this kind of weaponry to Kyiv. There is nothing surprising in this, since the land forces of Ukraine bear the main burden of confronting and deterring further Russian aggression. However, today it is necessary to start talking about the needs of the other branches of the Armed Forces of Ukraine given the challenges facing them.

The situation in the Ukrainian Navy is close to a catastrophic one. The Russian Federation’s occupation of the Crimea in 2014 especially negatively affected the fighting capabilities of the Ukrainian Navy as nearly 80 percent of the fleet was lost due to capture and defection. In fact, four corvettes (Lutsk, Khmelnitsky, Ternopil, Prydniprov’ia), two minesweepers (Chernigiv, Cherkasy), the large landing ship Konstantin Olshansky, and the submarine Zaporozhye were captured by Russian forces. In addition, Russian occupants captured and never returned up to 15 auxiliary vessels.

The urgent need for platforms in the Ukrainian Navy could be solved by Western country transfers to Kyiv of older ships, which are decommissioned or near retirement. Actually, from time-to-time this idea is voiced by certain American experts. The U.S. government, among other things, is ready to provide the Ukrainian Navy with two coastal guards ships of the Island class. They, in contrast to Ukrainian artillery boats of the Gyurza-M class, have better seaworthiness and greater autonomy. However, the simple transfer of platforms can only partly solve the problems the Ukrainian Navy faces today. Getting Western ships can solve the problem with minesweepers or auxiliary vessels. However, the main question remains unaddressed: how could the Ukrainian Navy counter attempts by the Russian Federation to use its domination of the Black Sea for further aggression?

As the result of Russian aggression Ukraine lost in Crimea ground-based anti-ship platforms, which were armed with Termit anti-ship cruise missiles. Similarly, after the Crimea occupation, the missile boat Pryluky was returned to Ukrainian authorities but lacked its two Termit anti-ship missiles.

Today the Ukrainian Navy is not able to properly counteract possible attempts by the Russian Black Sea Fleet to carry out an amphibious landing operation. In this contest it is necessary to recall that in 2014-2015 the Security Service of Ukraine exposed and broke down covert attempts to create the so-called secessionist Bessarabian People’s Republic. This fictional republic was going to be based on territories of a southern part of the Odessa oblast. In the event of the establishment of this illicit territory, the Russian Black Sea Fleet would have had the opportunity to freely land the necessary troops and to maintain sea lines of communication with a new pseudo-state bordering western Ukraine along with occupied Crimea. Ukraine in this case could not have prevented such contingencies, since the Navy does not have the necessary anti-ship capabilities to destroy combat and landing enemy vessels.

Although Ukraine is developing its own anti-ship cruise missile Neptune, the first public test of which took place in late January 2018, the system is still nascent. The relevant sea-based risks and threats for Ukraine still exist. In addition, the question is how many Neptune missiles Ukraine will be able to purchase annually for their Navy, given that the entire budget for modernization and procurement of equipment is only $600 million this fiscal year.

As a result, it is urgently necessary to start a dialogue on the possibility of transfer to Ukraine of American Harpoon anti-ship missiles with the necessary equipment for guidance and data exchange systems. The U.S. military budget for 2018 FY provides for the allocation of up to $200 million to enhance Ukraine’s defense capabilities, including the possibility of using these funds for purchase of coastal defense radars, minelayers, minesweepers, and littoral ships. This document captures a change in the paradigm of thinking and awareness in the Pentagon of Ukraine’s vulnerability to threats from the sea. However, as has been said above, only vessels or even radar systems will not be enough to remedy the shortfall.

The U.S. Navy is currently developing new generations of anti-ship missiles (LRASM, Tomahawk, and SM-6 anti-ship variants) that have much longer range than the current Harpoon anti-ship missile. However, in the context of a closed sea like the Black Sea, it will be enough for Ukrainian Navy to deploy the latest modification of the Harpoon missile – the Block II ER+. The radius of this modification is up to 134 nautical miles or 250 km. It is notable that the Ukrainian anti-ship missile “Neptune” will have a similar range. It is also indicative that Finland is considering the Harpoon Block II ER + as the main weapon for the future four frigates of the 2020 project, which will operate in the similarly constrained Baltic Sea.

The transfer to Ukraine of Harpoon Block II ER+ anti-ship cruise missiles and related equipment, together with their installation on future fleet and land-based anti-ship platforms, will not only eliminate significant gaps in the country’s defense capabilities. It will also help secure the safety of maritime trade, on which the economy of Ukraine depends critically. This decision will allow the United States to solve several important security issues in the Black Sea region at once. All this happens when the U.S. Navy has the smallest number of ships in almost a century (283 ships), and it faces the need for a permanent presence in numerous parts across the world’s oceans, including the Black Sea Basin. Strengthening the capabilities of the Ukrainian Navy will reduce the need for such presence. In addition, strengthening the anti-ship component of the Ukrainian armed forces will make its Navy a truly important component in any joint NATO Black Sea Fleet, an idea which has been discussed for several years. Today, the Ukrainian Navy cannot actually be an effective contributor to the joint efforts of the littoral states to contain the Russian Federation in the Black Sea basin. Ultimately, the presence of Harpoon Block II ER+ missiles together with the necessary radars and information exchange systems with other NATO countries will enable, in practice, to enhance the interoperability of the Ukrainian armed forces with NATO partners. In this way, it will contribute to the Euro-Atlantic integration of Ukraine and the fulfillment of the tasks of the Strategic Defense Bulletin.

Ukraine today, given the need of countering threats from the sea, is in a situation where the need for U.S. anti-ship missiles is much more important than obtaining Javelin ATGMs. The U.S. Defense Department’s budget for 2018 FY records the understanding that Washington should help Ukraine counteract not only land-based but also maritime threats that are actually much sharper, given the current state of the Ukrainian Navy. However, only the acquisition of appropriate anti-ship missiles such as the Harpoon Block II ER+ will enable the Ukrainian Navy to effectively counter the growing capabilities of the Russian Federation in the Black Sea. Such a bold decision will strengthen security in this part of the world, reduce the need for the United States to be constantly present, and make Ukraine a true contributor to Black Sea security.

Mykola Bielieskov is the Deputy Executive Director at the Institute of World Policy.

2 thoughts on “Should the U.S. Arm Ukraine with Anti-Ship Missiles?”