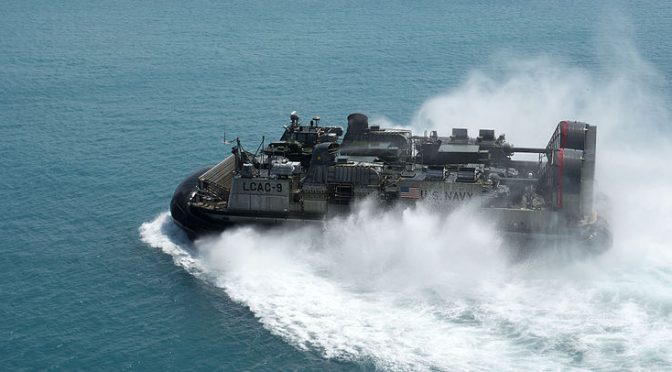 Today’s global security situation is increasingly complex with challenges in multiple areas of operation. Many of today’s challenges take place in the littorals yet much of the surface Navy remains uncomfortable operating within this environment. Over the last three decades, the Navy focused primarily on power projection from uncontested deep water. Our focus on power projection, specifically from aircraft carriers (CVN), has highlighted the CVN as our center of gravity – both militarily and politically. These CVNs are not suited for contested littoral operations. Unfortunately, the increasing proliferation of land based anti-ship cruise missiles (ASCM) makes operating within sight of land progressively risky for any grey-hulled ship. Instead, high speed, easily maneuverable vessels with relatively shallow drafts should conduct shallow water and littoral operations in contested environments.

In the event of a conflict within the littorals, operating a group of distributed small crafts may be a better option than sending an Aegis ship or CVN into the fray. One option for adaptive force packages (AFP) might be to employ “up-gunned” LCACs, possibly pairing them with a San Antonio-class LPD or a pair of Platform Supply Vessels (PSV), and an LCS. The below scenario shows how this unconventional adaptive force package can provide greater flexibility in the event of a slide from Phase 1 to Phase 2 operations as well as enabling sea control over sea lines of communication.

Increasingly hostile political rhetoric in the region has led leaders to question the availability of a major SLOC to U.S. forces or international shipping. Balancing fears of escalation with the impact of the SLOC closing, U.S. forces reinforce a partner nation’s Navy to prevent the forced closure of the SLOC. Due to a multi-axis threat environment in the littorals, leadership has decided to send an AFP composed of two PSVs, each carrying 2-3 LCACs, an LCS, and a DDG to patrol an adjacent area in the event of kinetic engagement. The AFP is initially deployed in a de-escalatory posture meant to reassure partners without further provoking tension. A single DDG is to remain in the area, but not enter the SLOC or its immediate vicinity unless tensions increase. To allow for strong back-up against the opening salvo of a kinetic environment against higher end surface threats, the DDG is loaded with several new SM-6 missiles1 and is equipped to conduct a remote launch based on information from any of the other ships – including the LCACs. Each LCAC is armed with a machine gun, a re-fitted 2.75-inch advanced precision kill weapons system2, and a small drone for laser guided targeting. The PSV has a RAM launcher with four ESSM for limited self-defense capability and can make speeds of 15-17 knots (and possibly up to 28 knots with upgrades) when fully loaded. Once in the patrol area, the PSV launches the LCACs in a rotational cycle and serves as a small tender carrying spare parts, a 3-D printer, a spare drone, and berthing for the off-cycle LCAC crews.

Naval Doctrine Publication 1 – Phases of an Operation or Campaign

In either case, while the DDG and LCS provide an overt presence, the PSV could remain in a covert posture providing backup should the situation escalate. Securing its military-grade radars and operating solely with commercial navigation, a PSV could be camouflaged to remain largely indistinguishable from surrounding shipping. Launching a single LCAC at night, the LCAC could then operate beyond the horizon and serve as a picket, a communications relay, conduct sanctions or legal enforcement  via a qualified board and inspection team, or a simple force multiplier beyond the horizon. The LCAC is a perfect vessel to conduct such duties as it has the ability to operate beyond the horizon, has a reduced radar cross-section for limited early warning, can be configured in multiple ways prior to launch from the PSV, and is capable of maneuvering at high speeds to outpace most other small surface craft.

As tensions in the area increase and overt, continuous exploitation of the EM spectrum intensifies, the force must operate with limited communications. One way of allowing intermittent communications without conceding the tactical advantage of the force’s exact location is using point-to-point communications. Although point-to-point communications require line of sight, the speed and maneuverability of the LCAC and LCS allows for set patrol boxes where ships come into communications range at pre-determined intervals to pass quick bursts of information, updates, and any changes to mission tasking. The largest drawback to communications in this manner is the fueling requirements to maintain a high OPTEMPO of patrols and communications. Here, the PSVs could also double as  refueling platforms. Serving as a tanker may limit their ability to ballast and deballast, but also offers greater flexibility to the AFP and provide greater staying power.3 In the event of increased on station time or greater OPTEMPO a single PSV could also rendezvous with an oiler outside the contested area and then transit back to the AFP.

Increasing tensions would lead to a message sent to the DDG of increased hostilities, changes in the rules of engagement, and a list of reactions to any hostilities. Once the information had been relayed to the proper PSV, a small, prepositioned landing force would then conduct an amphibious landing in order to secure and hold the land surrounding the SLOC. The landing of  forces would be the responsibility of several LCACs while one LCAC and the LCS serve to protect the landing force from any seaborne threats. Once secure, the landing force would be able to set up equipment for localized counter A2/AD. The landing force could also serve as a relay station for information between the smaller ships and senior officers beyond the horizon via point-to-point communications relays. Finally, as  landing forces secure the SLOC from being closed via  land, the LCACs would then transition to serve as escorts for shipping through the SLOC, conduct boarding operations of suspicious vessels as directed, and serve as resupply vessels for the shore based landing forces. The LCS would then continue to serve as an escort or conduct mine hunting as appropriate.

Should missiles be launched from either hostile ships or shores, the AFP would be capable of limited self-defense as well as second-strike retaliation. Specifically, the LCAC provides a very complex target with low radar cross-section as well as an innate defense against IR or millimeter wave seekers which have reduced capability getting a lock on  target due to the spray generated by an LCAC at maximum lift.4 With a drone providing laser guidance, the LCAC would be able to fire at other ships while remaining outside small arms range and possibly provide targets for over-the-horizon launches from the Aegis vessel and quickly relocating before counter-targeting can be successfully achieved.

While the scenario above focused on the slide from Phase 1 to Phase 2 operations, the listed platforms could also have a significant impact during Phase 0 or Phase 1. In peacetime operations such as security cooperation engagements with regional partners who have smaller navies, a more versatile LCAC provides a greater range of engagement options. A nimbler LCAC could also be used to conduct Foreign Humanitarian Assistance in brown water areas to increase delivery of U.S. humanitarian aid and improve knowledge and operating experience for the LCAC crews and operational planning for CTF Ops and Plans.

The construct of vessels for the above scenario injected one new ship and an existing craft with increased capabilities. The LCAC with a .50 caliber machine gun, some other close in weapon, as well as surface-to-surface missiles is much more capable than the current platforms. These craft would be able to operate more independently and would provide a significant force multiplier. A similar comparison might be the difference between the SH-60B and SH-60R. The 60R with its advanced radars and increased capabilities operates with a much greater range and tactical impact than the 60Bs. Giving greater independence to the LCAC would also increase the ability to operate inshore.

We cannot neglect the littorals as the world grows increasingly complex with challenges in multiple regions. Such waters surround many of our allies, friends, and partner nations. In order to meet our commitments as well as to maintain dominance at sea we must strengthen our ability to operate in the littoral domain. While our skills in power projection and deep-water tactics remain strong, we must re-evaluate our risk calculus as situations vacillate between the various phases of war and employ existing assets creatively. Expanding the uses and armament of LCACs (“If it floats, it fights”) is a simple place to start.

LT Megan McCulloch is a surface warfare officer currently studying at the Surface Warfare Officer School. Megan is thankful for CAPT John Devlin’s (ret) input and expertise in developing this article. John C. Devlin, CAPT (ret), USN, is Director of Navy Programs at ISPA Technology, Inc. The opinions and views expressed in this article are those of the authors alone and are presented in a personal capacity. They do not necessarily represent the views of U.S. Department of Defense, the U.S. Navy, or any other agency.

1. In reference to ongoing efforts to provide SM-6 with anti-surface capability.

2. “Advanced Precision Kill Weapon (APKWS) System – Laser-Guided Rocket | BAE Systems | United States.” (This missile is simply an example, of the type of rocket or close-in surface-to-surface missile that might be added to the existing frame.)

3. The impact to the ballast/deballasting capabilities of a PSV might also be negligible. The PSV currently has a slip mud tank which can hold 400,000 gals. If reconfigured to hold fuel for the LCACs then 100,000 gals of additional fuel equals about 20 refuels of the current LCAC for 600 nm legs in a light load condition.

4. This statement is currently theoretical, due to lack of testing. The theory is sound and should hold, however is not a definitive and should not be taken as fact yet. For more information, please contact John Devlin, CAPT, USN (ret) at jdevlin@ispatechnology.com.