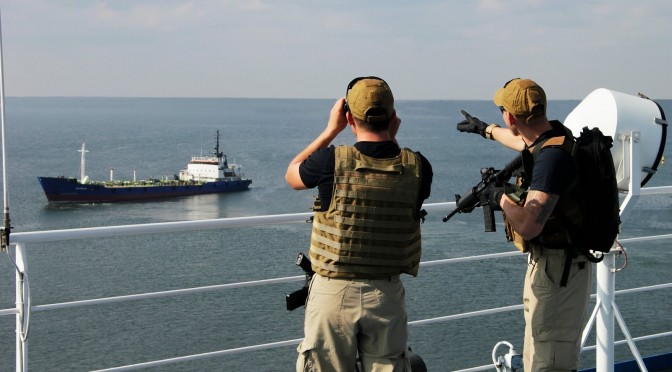 CIMSEC “Private Military Contractor Week” has generated several pieces including the two part commentary “America Should End Mercenary Contracts”. Any discussion about PMCs can generate visceral reactions, especially given their activities in Iraq and Afghanistan in the past decade. Nevertheless, the possibility of their growing presence in the 21st century maritime environment suggests a healthy debate and a more accurate reflection of the issues is required. Consequently, “America Should End Mercenary Contracts” has several issues which ought to be deliberated and clarified in this forum.

What’s in a Name

The article, in the second paragraph, may be confusing the private military contractors of the Executive Outcomes to the PMCs in Iraq and Afghanistan. In the case of the former, PMCs were reportedly used for offensive operations while in the latter case PMCs were ostensibly used or intended for more defensive purposes such as the protection of convoys. As a result, it is the latter which is more similar to the firms employed in maritime security and, thus, the subject of CIMSEC’s PMC Week. Land-based and maritime-based PMCs have inherently different missions. Maritime security companies were not hunting down pirates off Somalia, for example. They provide on-board defense security. To date, as several senior Obama administrations have admitted, no ship with an armed guard contingent has been taken by pirates.

Although the author suggests that these modern mercenaries are privateers, that is likewise an inaccurate term for two reasons. First, privateers were issued letters of marque by states. Most maritime security companies today have a direct fiduciary and contractual relationship with shipping companies and not, by and large, states. Second, privateers were issued those letters of marque to actively attack enemy commerce during wartime. As stated earlier, maritime security companies have a more defensive role and do not seek out illicit organizations.

The author’s criticism of the private sector is understandable. Historically, many did not behave ethically; as a result, government regulations ensure basic foods were untainted, children were not used in the labor force, and reasonable work weeks were the standard. The article states that “to maximize its profits, Mercenaries ‘R Us declines to armor its contractors,” etc. This is a legitimate issue, but it is also legitimate to discuss the role of the federal government in which contracting officers seek out the lowest-bid among various contractors. Or consider that the U.S. went into Afghanistan with “the army you have—not the army you might want or wish to have at a later time,” as then-Secretary Rumsfeld noted when the military sent in vehicle that failed to be up-armored. By contrast, some contractors had the flexibility to respond to changing circumstances on the ground rather than wait the traditional Pentagon acquisition route.

Another criticism by the author of PMCs is that “as long as the stock price stays high and the dividends keep coming, the shareholders are unlikely to have very much concern for the human toll of warfare.” What the author may not be aware of is that most PMCs – certainly maritime security companies – do not have public shareholders; rather they are privately held. But if this argument was valid, should the United States likewise restrict the use of publicly-held military contractors such as General Dynamics, Lockheed Martin, and Northrop Grumman because they build the tools and platforms for conducting war? Arguably, if they are accountable, then so might U.S.- or internationally-regulated PMCs. If the author is only discussing the direct actions by individuals providing security, then he might want to walk into any federal building in Washington DC. During a recent visit to the National Archives as I awaited the building to open for researchers, I noted the half-dozen armed guards who were not police. They informed me that their contract gave them jurisdiction to the sidedwalk. Contractors. Armed. In a federal facility.

The author is absolutely correct that organizations must be held accountable. He states that his hypothetical “Mercenaries ‘R Us” has “no congressional committees to answer to” and their “contract warfare seems to skirt at least the spirit of mandatory Congressional oversight of the nation’s military.” But that’s not entirely accurate. Since 2007, the House Armed Services Committee had held twenty-two hearings  in which the role of private security contractors was discussed. The House Committee on Oversight and Reform also held a very highly publicized hearing on the role of the former Blackwater in Iraq with Erik Prince providing the sole testimony. Since 2007, the Senate Armed Services Committee has held forty-six hearings in which issues about PMCs were raised.

In addition, the author may not be aware that Congress has already acted on the issue of accountability when it passed the National Defense Authorization Act in October 2007 which modified the Uniform Code of Military Justice which made the UCMJ applicable to PMCs.

This is not unprecedented. During the age of sail, for example, privateers were held as accountable as officers and sailors in the U.S. Navy. For example, the author might benefit from the “Records of General Courts-Martial and Courts of Inquiry of the Navy Department 1799-1867” in which he would find a number of privateers among U.S. navy ships and personnel. For example, the crew of the privateer brig Scourge in Case 196 were tried for pillaging a neutral vessel and assaulting a superior officer. They were tried by a board of navy officers under board president Captain Isaac Chauncey. Those not acquitted received the same punishment as Navy sailors – the lash and forfeiture of their share of prize money. In that era, U.S. Navy officer and sailors also shared in the profits of captured enemy vessels. Nor was this the only case; others were likewise tried for violating the 1800 “Act for the Better Government of the Navy. So PMCs – or rather PMSCs specifically – are and could be held accountable.

The author states in paragraph 3 that “if the injured PMCs were instead American service members, they would be given medical treatment and rehabilitation through military medicine. The VA, for all its flaws, would attempt to help the wounded recover and restart their life after their injuries. If the fallen were uniformed military, their survivors would be taken care of with survivor benefits. All of these benefits were enacted by Congress to support the men and women who go abroad to do the nation’s work in harm’s way.” Because most maritime security companies are hired directly by shipping companies, this particular statement might not apply. However in the future if the US found itself in a position to hire more armed guards on the few US-flagged ships remaining, then there is precedent for Congress to expand services for them. This includes “An act regulating pensions to persons on board private armed ships” who become wounded or disabled (February 13, 1813), “an act to amend and explain the act regulating pensions to persons on board private armed vessels” (August 2, 1813) and “an act giving pensions to the orphans and widows of persons slain in the public or private armed vessels of the United States (March 3, 1814.) By 1824, the Privateer Pension Fund listed ninety-seven “invalids disabled in action in the line of duty.” The fund was governed by a secretary, John Boyle, who later served as acting Secretary of the Navy.

The issues surrounding PMCs and, specifically, private maritime security companies, are far more complex and demand more attention in the coming decades. The fact is the U.S. and other traditional powers are downsizing their militaries while global and regional security threats are at best constant and at worst growing. While turning toward the private sector for supplementary security in as regulated environment as US military forces may seem distasteful to some, the reality is that without sufficiently right-sized military options, countries and companies will have to turn to their own sources of private security particularly at sea. If the U.S. and partners stick their head in the sand with this issue or dismiss it out of hand, private security will not go away; in all likelihood the vacuum of control and regulation will either expand without appropriate international mechanisms or simply fall upon rising peer-competitors and that may be a far more troubling outcome.

Claude Berube teaches at the United States Naval Academy and is an officer in the Navy Reserve. His third book was “Maritime Private Security: Market Responses to Piracy, Terrorism, and Waterborne Security Risks in the 21st Century. He is the immediate past chair of the editorial board of Naval Institute Proceedings and is writing his doctoral dissertation on Andrew Jackson’s Navy. The views expressed are his own and not those of the Naval Academy or the US government.

11 thoughts on “A Response to “America Should End Mercenary Contracts””