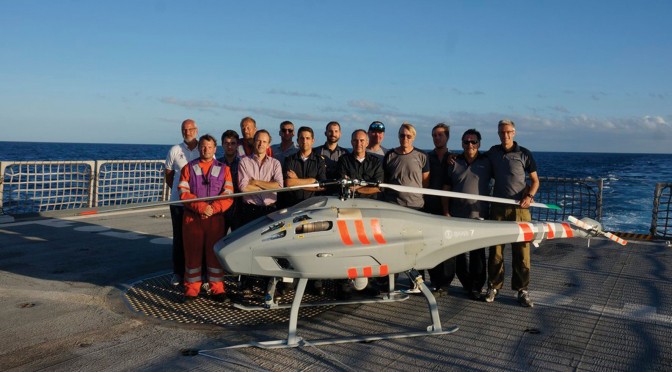 We’ve talked about privately-funded drones for maritime eco-activism and humanitarian operations, so it’s not surprising to see another naval mission where unmanned air vehicles have bled into the private sector. Now, at least one private security company has offered UAV services as an anti-piracy solution.

Commercial shipping companies embraced private security as a means for protecting their ships after piracy in the Indian Ocean expanded significantly in the late 2000’s, putting crews at risk and costing shippers billions in dollars in increased insurance premiums.

Incidents of Somali piracy have been virtually non-existent since 2012, primarily due to the hardening of commercial shipping targets by embarked security teams. Other counter-measures, such as fire hoses, razor wire, and hardened crew citadels were too easily defeated by pirates, but to date, no ship with an armed security team has been successfully hijacked. UAVs make a lot of sense to enhance the effectiveness of these teams. According to Advanced Tactics and Countermeasures Global, “acting as a forward scout and transmitting a live video feed of possible threats, the ATAC UAV simultaneously video documents each step from the identification to even the escalation of force, if necessary.” ATAC’s video depicts a quadcopter launching from a container ship, which would work in conjunction with their designated marksmen onboard the ships to deter and neutralize a pirate attack. The ability of the UAV to get much closer to suspicious skiffs will also help security teams to reduce liability and mistaken identification of fishermen as pirates.

If deployed, these private sector UAVs will join the ranks of the increasing number of naval drones flying anti-piracy patrols in the Indian ocean. The Italian Air Force’s 32nd Wing flies the MQ-1 Predator out of Djibouti for EUNavFor. Among other navies operating ship-board UAVs against Somali piracy, Dutch and American ships have flown ScanEagle and the Spaniards the Skeldar. U.S. ships have also deployed the Fire Scout against pirates.

This post appeared in its original form at NavalDrones.com and was republished by permission.

One thought on “Private Security Drones for Counter-Piracy Ops”