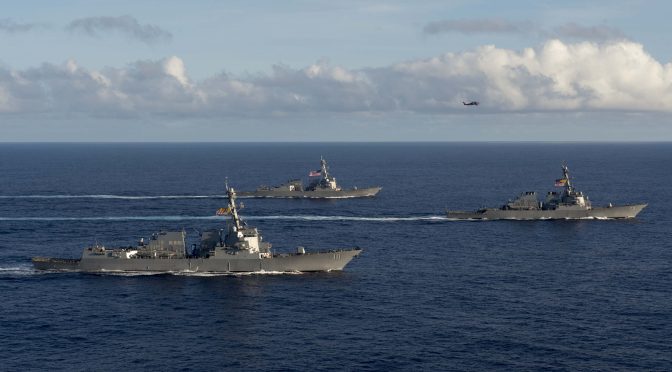 The cruisers and destroyers that comprise our Surface Action Groups (SAG) are like the tight end of the figurative maritime football team. The tight end is a great position. The tight end is a jack of all trades. Sadly, this also relegates him to being a master of none. The tight end will inherently never have the speed to outrun a corner nor the size to take on a double team. He will be decent at those things but never great. His job is to be the flexible organic mass compensating for the all-star positions making big plays. Although direly necessary in its limited function, a team cannot be comprised of generic compensating mass alone. Like a tight end’s well-rounded skill set, the generalized load-outs of our CRUDES ships provide a comforting buffer and mission flexibility but dampen our potential lethality. In the immortal words of John Paul Jones, “He who will not risk cannot win.”

We need greater specialization in our Surface Action Groups. We don’t need more tight ends. We need wide receivers who can block and tackles who can catch a pass. These specialists with overlapping mission capabilities will create a more potent offensive force whilst maintaining an appropriate defense. The primary unit tasked with maintaining air superiority will not have to waste precious magazine space beyond minimal anti-surface capabilities because the ship entrusted with that mission area will have the equal and opposite armament to compliment his counterpart. The SAG must be modular and scalable to support the mission objectives laid before them. As easily as a coach can substitute a player, the Navy, too must be ready and flexible. With each ship’s warfare focus clearly defined, commanders will have the ability to add or subtract specific vessels in support of various mission sets and theaters of operation. Assets can be scaled up or down and allocated according to the tactical needs the mission warrants.

Every warship will be commanded by a Weapons Tactics Instructor (WTI). Much like a marine and his rifle, these next generation warriors will be intimately familiar with the weapons they command. The WTI program, although still in its infancy, is guiding the Navy back to its tactical roots. It will create leaders tactically proficient in air, surface, and subsurface warfare areas that will be force multipliers for a SAG. These individuals must be identified and directed towards commands that will capitalize upon their knowledge and skillful utilization of the warship’s capabilities. The Integrated Air and Missile WTI will command ships tasked with air supremacy, the Surface Warfare WTI will command the seas, and so forth with the other WTIs and their respective mission areas. With the increased potency of our offensive capabilities, specialized individuals must be assigned and prioritized to relevant commands to ensure maximum effect with regards to possible kinetic solutions. There must be no wasted Sailors, ships, or munitions in the war to come. We require individuals in our SAGs who can utilize their weapons to the fullest potential.

The cruiser will be the de facto SAG leader and primary air coordinator. With its combat suite optimized for an additional command detachment and enhanced command and control capability, the cruiser is a natural choice. Its additional Vertical Launch System cells and fourth Fire Control illuminator make it ideal for ensuring air supremacy for the rest of the SAG. No fewer than two destroyers will accompany the cruiser to bolster air superiority, and to ensure surface or subsurface dominance. They will be specifically configured based upon their warfare specialty and the requirements dictated by the mission and surrounding elements. We need appropriate magazines for these warriors to employ. The primary unit tasked with Air supremacy cannot afford to waste VLS cells on land attack missiles just as the primary Surface commander cannot sacrifice their anti-ship missiles for air beyond the minimum needed for self defense. While a Swiss Army knife is useful in its function, one would never build a house with it.  There is a reason the hammer has been invented.  It is the right tool for the right job not just a tool for a job.

With the continued proliferation of unmanned vehicles, it will be necessary for an amphibious ship be attached to the SAG as both a staging platform and an invaluable battle force multiplier. The amphibious ship can host the unmanned complement to each specialty commander’s tasking. Instead of Marines and their supporting vehicles, the well decks will be filled with unmanned sub and mine hunters, as well as anti-surface vehicles for use by the SAG’s surface and subsurface commanders. The flight deck will be filled with drones controlled by the air commander. In a war of attrition, these assets will enhance survivability of blue units while increasing lethality to red. Lives need not be unnecessarily risked when we have machines to employ in their stead. The SAG will be given dangerous and pivotal missions in which their tactical ability will need to be without question in an environment where they will take casualties both to personnel and equipment. The amphibious ship will carry reserves of both to ensure the SAG can remain on station. The abundance of drones will supplement the numerically small yet heavily-armed ships comprising the SAG.

In a world defined by the electromagnetic spectrum, it is no longer enough to attack the equipment. A SAG commander must be continually aware of and decide how to tactically manipulate their profile in a communications-denied and emission-controlled environment. We must instead aim for the operator interpreting the equipment’s reports. Technology will reach a limit where we can no longer overcome it with other technology. It will then be a matter of influencing the perception of the individual making decisions based on the information they receive. When the enemy is searching for a small contact they may pay not attention to the large ones. A single destroyer with the radar cross section of a tanker traveling along shipping lanes warrants no second thought compared to the apparent squad of rowboats making a trans-Pacific journey.  The enemy is looking for strike groups spread over hundreds of miles communicating on every frequency at their disposal and radiating each radar to its full capacity.

We must use this knowledge to our advantage. In this regard, an Information Warfare commander will take on  greater responsibility for not only individual warships but the SAG as a whole. In concert with Air, Surface, and Subsurface commanders, the IW commander will coordinate the electromagnetic activities of the SAG while monitoring the perception of enemy operators. This warfare area is important for attacking left of the kill chain as the WTI are for attacking right of it. Because of this importance a greater weight must be placed upon IW and experts should be at the forefront in training  other warfare commanders on how to fight effectively in the dark.

While doing this, we must continue to operate as our opposition expects as long as peace allows while training for the eventuality of never being afforded this luxury again. The enemy has been lulled into a safe pattern of recognition due to our over-dependency on our once superior technology. While propagating this impression, it is essential that we develop our ships into perceptual landmines. A single mine found can guard an entire field or waterway and is the quintessential Occam’s Razor of Anti-Access/Area Denial. A warship, completely invisible to the electromagnetic spectrum, capable of unleashing devastation before disappearing once more, will shut down entire sectors of the ocean and control the seas through even the rumors of its presence. There will come a point where modern technology will fail us in our mission. The SAG that trains for this and draws upon antiquated techniques of navigation and war fighting will dominate the seas.

It is important now to project our power and run up the score to ensure this team cannot hang with us until the fourth quarter. There is nothing wrong with the traditional SAG or the tight end, but he needs a specialized, supporting cast to win decisively. The Navy requires a wide receiver who can catch the long ball when the defense stacks the box and a fullback who can drive it down their throats when the defense shifts to compensate. While the tight end is a key player, rarely has a defense needed to plan their game around one. We too must divest ourselves from this safe yet unimaginative playstyle while not abolishing it completely. We require specialty players who can keep the enemy off balance and force them to adjust their defense. No longer can there be a generic force presented for the opposition to send generic units in response. That’s too easy and too safe. We project the exact power we want them to counter and dictate the pace of play accordingly. Our high impact players will keep the opposition reliant upon us for operational cues until we have ripened the battle space for the traditional tight end to deliver the killing blow. Their continued failure will promote uncertainty and further reinforce our sea power dominance moving forward.

LT Jon Hill is the Fire Control Officer onboard USS Bunker Hill (CG 52). The opinions and views expressed in this post are his alone and are presented in his personal capacity. They do not necessarily represent the views of his ship, the Navy, or the Department of Defense.

3 thoughts on “Which Player Are You? Warfare Specialization in Distributed Lethality”