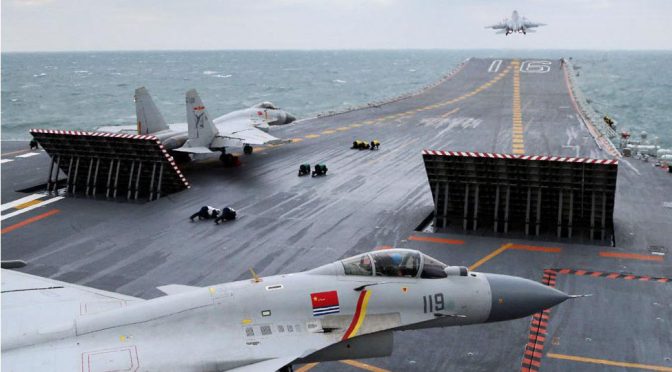 Between late 2016 and early 2017, there were several People’s Liberation Army (PLA) air and maritime maneuvers penetrating the so-called First Island Chain, including a deployment of the only People’s Liberation Army Navy (PLAN) aircraft carrier Liaoning battle group, for a routine exercise in the South China Sea. It went through the Miyako Strait between Miyako Island and Okinawa Island as well as the Bashi Channel, a part of the Luzon Strait between Taiwan and Philippines. All these maneuvers were perceived by strategic commentators and military observers as a milestone that can be signified in the efforts of the PLA’s force building.

Nonetheless, all the military maneuvers penetrating the First Island Chain during this period of time were not entirely revolutionary. Since early 2015, similar air maneuvers have been executed eight times. The Liaoning battle group only cruised through the waters on the east side of the First Island Chain, but no significant or even substantial drill was executed during this leg of maritime maneuvers. While these air and maritime maneuvers are intentionally showing off the PLA’s strength, these military deployments exposed many weaknesses strategically, operationally, and tactically.

First, it is debatable whether these maneuvers are really fulfilling the strategic blueprint of maritime dominance of various island chains as set forth by PLAN Admiral Liu Huaqing in 1982. Liu’s perspectives are widely addressed by many Western strategic thinkers, yet his argument had never been converted into any official PLAN doctrine. At least, the actual developments of PLAN deployments and operations are not consistent with Liu’s original concepts. We must consider whether the PLAN’s strategic planning is still directed and guided by Liu’s visions as presented in 1982. Otherwise, the blindness of self-fulfillment conviction can be a fatal factor in interpreting the PRC’s maritime or naval endeavors.

Second, penetrating the First Island Chain itself is not a strategic barrier but merely a psychological threshold. There are three factors in operational planning and execution: force, space, and timing. The essential strategic space is a geographical space which must be dominated or be occupied by the offensive forces as well as secured or controlled by the defensive side. The nature of the strategically essential space is quite dynamic. A perfect match of the three operational planning and execution factors may turn any geographical space into a strategically essential space at the right time for the right forces. It is meaningless for maritime forces to cruise in the waters that nobody would like to utilize and declare the dominance of these waters.

On the other hand, cruising through several international waterways during peacetime does not prove the capacity of breaking wartime blockage since no other party had ever expressed objection to these legitimate maritime maneuvers. The fundamental question about these PLAN air and maritime maneuvers is how these maneuvers may imply potential wartime actions. The answer will be inconclusive since these maneuvers can be interpreted as everything but will not be firmly identified as anything. If dominating the waters around the East side of the First Island Chain failed to undermine potential adversaries’ maritime interests, then all the significance emphasized by various strategic commentators are in essence overstated. No matter how routine the People’s Liberation Army Navy and the People’s Liberation Army Air Force crossing the First Island Chain for air and maritime exercises may be, the strategic significance is relatively limited.

Third, unless all the island territories of the associated island chains can be well-controlled before executing any maneuvers, dispatching maritime forces and their airborne counterparts through the First Island Chain runs many risks during wartime periods. In fact, adopting the island chains as the relative geographical indexes may expose the strategic thinking as nothing but an extension of coastal defense. The core of maritime strategic thinking should be the command of the sea, including sea control and sea denial. The essence of maritime majesty is to compel adversaries to follow your will, not to control a space with no strategic value. As compared with Chinese global maritime activities, interests, and naval presence, the actual deployments of the PLAN fleet are already beyond those island chains. Without the dominance of the island chain land territories, the wartime operational sustainability beyond the island chains can be very questionable.

Fourth, many political commentators insisted these People’s Liberation Army exercises and military maneuvers penetrating the First Island Chain are about sending coercive signals to neighboring states, particularly, Taiwan, Japan, and the United States, about the Taiwan issue. The viewpoint can be another overstated bias. Given the three major channels of the PRC for declaring external policies associated with Taiwan, those spokesmen of the Foreign Ministry, Defense Ministry and Taiwan Affairs Office had never taken the initiative to deliver any related intimidating statements during these military maneuvers. In contrast, as many media expressed such speculations, all the PRC mouthpieces, including these three formal spokesmen systems, denied any association between the situations in Taiwan and these military activities. Of course, we still need to scrutinize the realities with the People’s Republic of China’s official statements. Although the cross-strait relationship has significantly deteriorated after President Tsai’s inauguration, the likelihood of employing these military exercises to coerce the Republic of China is still reasonably slim.

Fifth, as reflected by these military maneuvers and exercise scenarios, many operational and tactical features are worthy of discussions. These air maneuvers not only put the focus on air battles but also emphasize the considerations of engaging with the surface combatants, either surface vessels or military sites on land. Attempts for combining different air platforms and integrating units from People’s Liberation Army Air Force and People’s Liberation Army Naval Air Force (PLANAF) are obvious. Certain rules of engagement can be expected since a stable modus operandi is revealed by these maneuvers in different periods of time. The major task for the PLANAF is to practice engagement tactics for targeting surface vessels. Several PLAN surface vessels are concurrently directed as the counter forces for such exercises. Maritime patrol aircraft attend as the scouting platforms, and the airborne early warning and mission control platforms are effectively conducting their command and control functions for air combat and surface attack missions.

No indication of live fire exercise has  been seen with the air and maritime maneuvers across the First Island Chain conducted by PLAN surface vessels or their airborne counterparts so far, but it is only a matter of time. Also, very little evidence proves any significant electronic warfare drills having been executed during these maneuvers, though certain platforms may have the inherent capability for electronic warfare. There are flaws in the exercise plans as well. There are few indications for search-and-rescue arrangements or mechanisms or contingency measures for malfunctions or emergencies. Whether we need to praise the bravery of these PLA military professionals for long-range exercise without a bailout mechanism or speculate the reckless of the PLA operational staff is a topic for further observation.

Last but not least, nobody could ever properly describe the exact scenario for these air and maritime maneuvers until now. There is no clear PLA doctrinal norm to support these exercises with different combinations of platforms. The possible operational concepts reflected by these exercises are still yet arguable. Whether these military exercises may well support the possible political aim is still a myth to be further scrutinized. We fail to generalize any possible operational directive from the same well-known modus operandi for concluding possible rules of engagement since it is very hard to tell what should be the expected operational situations for employing these air or maritime maneuvers. After all, to firmly conclude any meaningful implication from events that only occurred less than ten times is indeed a challenge.

At most, we may successfully exclude some plausible speculations and groundless accusations with political smear intentions. To summarize a prompt judgment on these PLA maneuvers penetrating the First Island Chain recklessly, without military professionalism and political consciences, would be a sin of contributory negligence as we misperceive the potential challenge today and are forced to swallow the catastrophic failure in the future.

Dr. Ching Chang was a line officer in the Republic of China Navy for more than thirty years. As a visiting faculty member of the China Military Studies Masters Program at the National Defense University, ROC, he is recognized as a leading expert on the People’s Liberation Army with unique insights on its military thinkings.