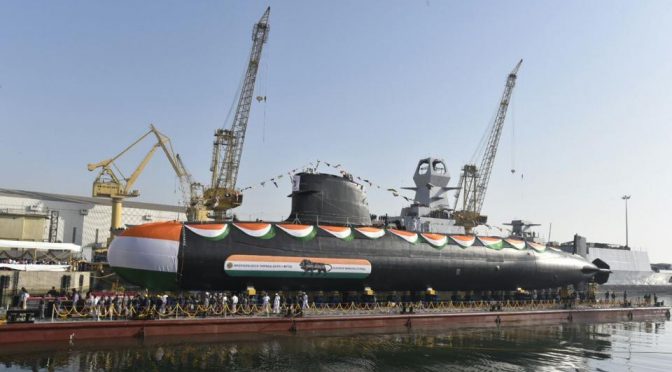 This article originally featured in Geopolitics and is republished with permission.

The Indian Navy’s Submarine Arm will celebrate its Golden Jubilee Year in 2017. The imminent commissioning of the Kalvari — in her new avatar as India’s first Scorpène Class submarine — is, therefore, an especially timely portent of happier times for the underwater sentinels of our freedom. For some time now, much media-time has been devoted to lamenting the several perceived inadequacies in the country’s submarine prowess, especially after the tragedy that struck INS Sindhurakshak in Mumbai on 14 August 2013, resulting in the loss of 18 precious lives and the loss of an invaluable combat platform. As the Scorpène program ran into time overruns and as the People’s Republic of China began submarine forays into the Indian Ocean, breathless TV anchors defense correspondents have invoked ‘Upgrade’ as a new and urgent mantra against Chinese machinations. The truth is, of course, somewhat more prosaic. ‘Upgrades’ are part of a normal naval response to the technological and tactical changes wrought by the evolution of naval operations through which armed combat is prosecuted upon, over or under the sea. Can technological upgrades make up for numerical limitations? The answer is not straightforward. Although quantity does have a quality all of its own, in undersea warfare, technology has an inordinate influence upon the outcome of combat. So how do we currently fare in terms of both, absolute quantity, and the quality of the quantity that we do have — and what is the prognosis for the immediate future?

Submarines have traditionally been used as a counter to surface ships — both, merchantmen (easy pickings) and warships (far riskier an endeavour). This is where they have the most advantage, operating in a different medium from their adversary and being able to vary their depth to take advantage of the various density-layers that lie between the surface and the sea-bed and affect the propagation of sound underwater. Weapons employed in such cases are typically anti-ship torpedoes and/or anti-ship cruise (i.e., non-ballistic) missiles. Submarines can also be used against targets ashore (on the land) — i.e., for land-attack. They must then be equipped (or be retrofitted) with suitable land-attack missiles with either conventional or nuclear warheads. Naturally, this impacts the size of the submarine’s hull and imposes restrictions upon how close it can approach the coast.

When submarines are designed or deployed to operate against other submarines, the advantages accruing from disparity of medium no longer apply, for both opponents are now within the same (underwater) medium and torpedoes become weapons-of-choice. Since submarines generate underwater sound in a variety of frequencies, the factor determining surprise is relative noisiness — more usually expressed as ‘stealth.’ SSBNs are inherently noisy. Consequently, smaller and equally speedy but much quieter SSNs, equipped with missiles and torpedoes instead of nuclear-tipped, long-range ballistic missiles are deployed to detect and continuously track an adversary’s SSBNs. Likewise, modern diesel-electric submarines (SSKs) are often far quieter than an SSN and are designed to track and, where necessary, attack not just surface ships but also SSNs — or even other, relatively-noisier diesel-electric submarines.

Nuclear propulsion maximizes underwater speed and endurance, but demands a larger hull and constrains the submarine in littoral waters. Diesel-electric submarines are far smaller than SSNs and SSBNs and can, consequently, operate both, in the deep seas and in relatively-shallow littoral waters. They make-up for their relative lack of underwater-endurance by one or another type of Air Independent Propulsion (AIP) package, but nevertheless yield enormous underwater speed-advantages to SSNs/SSBNs.

It is against this very rudimentary and fairly simplistic backdrop that one should review the state of Indian submarines (aka boats) and their upgrades.

India currently operates two classes of nuclear-propelled boats: SSBNs (the Arihant) and SSNs (the Chakra), and, two classes of diesel-electric SSKs (the KILO or Sindhughosh Class, and the Type 209/1500 Shishumar Class), with the commissioning of the lead boat of a third class — the Scorpène Class (which will thereafter be known as the Kalvari Class) — imminent.

Current upgrades to the Arihant revolve about the replacement of its twelve ‘K-15’ submarine-launched ballistic missiles (which have a range of 750 km) by four longer-range (3,500 km) ‘K-4’ Intermediate Range Ballistic Missiles (IRBM), which have already been successfully test-launched (in April 2015) from the Arihant. This weapon-upgrade is well in hand.  However, as India takes the next step in the K-series and begins to produce K-5 — a true submarine-launched inter-continental ballistic missile (ICBM) — the submarine will need to be correspondingly larger with a greater displacement-tonnage. Consequently, for the next boat of the Class, the Arindham, there is a clear need to upgrade the reactor. The Arihant has an 85-MWt reactor (≈17 MWe, since in a naval reactor, roughly 5 MWt = 1 Mwe). The one for the larger and heavier Arindham will need to be somewhere between 160-190 MWt (32-38 MWe) and this is an upgrade that is ongoing.

There is no immediate equipment upgrade planned for the Chakra whose 10-year lease is at the halfway mark. However, the fact that in February 2015, the Modi government accorded political approval for six SSNs, makes a training and manpower upgrade for the Navy a critical objective over the next decade.

Turning now to the central issue of upgrades to India’s conventional submarines, two overarching aspects need to be borne in mind:

Most MRs of the Sindhughosh Class, have been undertaken in Russia. However, two — Sindhudvaj and Sindhudvaj — underwent MRs at the Naval Dockyard, Visakhapatnam, while the Sindhukirti suffered a dreadfully protracted MR in HSL. The Sindhukesari is the first to have commenced her SLEP. The residual life of the Class may be assessed through the following tabulation:

The corresponding tabulation in regard to the Shishumar Class (Type 209/1500) SSKs is similarly instructive:

With ‘alarm’ having been removed from the equation, it is possible to dispassionately examine a few major thrust lines relevant to ongoing and planned upgrades. For the professional naval submariner — planner and practitioner alike — upgrades-of-choice are those that enhance:

These upgrades may be either through indigenous or foreign replacements of the original equipment. Obviously, the former is preferable and, indeed, has yielded laudable results.

Stealth-Enhancement. Although such upgrades are often considered by our breathless media analysts as not being ‘sexy’ enough to merit focused-attention, in truth, stealth is always a life-and-death issue in submarine combat. With the hull design being resistant to any modification or change, these upgrades pertain to the reduction of vibrations and the underwater transmission of these vibrations as sound waves that can be picked up by an adversary’s passive listening devices. Thus, engineering-improvements to propulsion equipment such as speed-governors, bearings, fuel racks, supercharges clearances, and rotating machinery such as superior bearings, pumps, rubber-mounts, etc., count as major— albeit largely unacknowledged — upgrades.  Indigenization has been both successful and invaluable, with the increasing involvement of the Indian private sector companies such as L&T, Mahindra, Reliance, Tata, Siemens, Yeoman, Exide, Elcome, etc., being most encouraging.

Endurance-Enhancement. Although enhanced submarine endurance is almost invariably associated with the provision of AIP systems or nuclear-propulsion, habitability is another factor that directly impacts submarine endurance. For instance, the original air conditioning plants (35 TR capacity) aboard the Sindhughosh Class, which were grossly inadequate in Indian conditions, have been upgraded by indigenous (KPCL) plants of 67 TR capacity. This upgrade has increased the life of the on-board weapon-sensor suites and allied equipment, and, has enhanced operational endurance by improving habitability and reducing environmental human-fatigue. Where batteries are concerned, the upgrade to indigenous production by Exide Industries is stable and world-class — so much so that exports to Algeria and Iran have also been achieved. HBL-Nife is another success story in battery-production.

Optronics. By and large, the Indian media has a suboptimal understanding of the criticality of optronics aboard submarines and, consequently, little interest in periscope-upgrades. This notwithstanding, the fitment of new optronic periscopes onto the Shalki and the Shankul as part of their SLEP is an extremely significant upgrade.

Communications. Within the many criticalities of submarine warfare, communications enjoy a degree of centrality that is underappreciated. The upgrades provided by the retrofitment of the indigenously-developed CCS-Mk2 communications-suite are hugely significant. Where shore-to-submarine VLF communications are concerned, on-board upgrades by way of receiving equipment and Trailing Wire Antennae (TWA) have resulted in noteworthy improvements in combat deployments of all classes of our submarines.

Missiles. The most telling upgrade to the weapon-suite of Indian Naval SSKs has been the addition of anti-ship cruise missiles (ASCM) and land-attack cruise missiles aboard the Sindhughosh Class. Of the nine boats of this Class, six now have land-attack missile capability by way of ‘Klub-S’ [3M-14Э] missiles, while seven have anti-ship cruise missile capability by way of ‘Klub-3M-54Э. Likewise, the two boats of the Shishumar Class (Shalki and Shankul) that have commenced their SLEP in Mumbai by ThyssenKrupp Marine Systems (TKMS) are being retrofitted with 12 x UGM-84L Harpoon Block II Encapsulated Missiles and 10 x UTM-84L Harpoon Encapsulated Training missiles.

Torpedoes. India’s investment in infrastructure for the development and testing of torpedoes notwithstanding, each such program is time-consuming and can take upwards of 15 years. However, the successful induction of the Varunastra heavyweight torpedo aboard the IN’s surface combatants has led to an ongoing development of a submarine-launched version (an upgrade of DRDO’s now-defunct Takshak project). An unfortunate spinoff from the Sindhurakshak tragedy (and that of the Russian Kursk) is a loss of confidence in thermal torpedoes and consequent uncertainties in respect of DRDO’s development of the Shakti thermal heavyweight torpedo, which was expected to be the main armament of India’s nuclear submarines and additionally represented an upgrade-option for the Sindhughosh Class.

External Situational Awareness. The Maritime Domain Awareness (MDA) of all boats has received a significant fillip with the upgraded communication-and-data capability provided by the Navy’s Rukmini satellite, coupled with excellent progress in VLF communication and its remote keying by naval Long-Range Maritime Patrol-cum-ASW aircraft. Moreover, the indigenous Combat-Information Management Systems (CMS) developed by WESEE represents another critical combat-capability and is fitted aboard all boats.

Internal Situation Awareness and Control of the Internal-Environment (Platform-Management-and-Control Systems). The motion-control system of the Sindhughosh Class has been upgraded from the PIRIT-2E to the PIRIT-M. Likewise, the diving-and-surfacing control system has been upgraded from the PALLADI-2E to PALLADI-M. Functionally-corresponding systems are being upgraded as part of the ongoing SLEP of the Shalki and the Shankul.

Safety and Survivability Systems. Critical upgrades in terms of safety and survivability include the installation of the AIDSS (Advanced Indigenous Distress Alert Sonar System) on the nine boats of the Sindhughosh Class submarines, as also the ongoing retrofit of the Shishumar Class boats Shalki and Shankul with the Alenia Sistemi Subacquei’s C-310 submarine-fired torpedo decoy dispensers and a self-noise monitoring system, being part of their SLEP. Seldom recognized but hugely critical nevertheless, are rubber sealants, O-rings, gaskets, etc., that are used to seal the various periscopes and retractable masts that every submarine operates. There have been past incidences of an otherwise fully-operational submarine being rendered unseaworthy for the lack of rubber sealing devices! Consequently, indigenous upgrades under the aegis of the Indian Rubber Board and the Indian Rubber Institute, are far more significant than most media analysts are aware.

Even as the country awaits — with bated breath — the arrival of the Indian Navy’s Scorpènes, the process of upgrading the combat capability, safety and survivability of our existing sub-surface assets is continuing apace. The truth of the Indian Navy’s subsurface capability lies somewhat removed from the breathless Cassandran prophets of doom that currently crowd our media airwaves. Perhaps this is because of the abiding belief that bad news — even alarmist bad news — sells.  On the other hand, perhaps our countrymen and countrywomen should be considered mature enough to decide for themselves based upon the facts as they are.