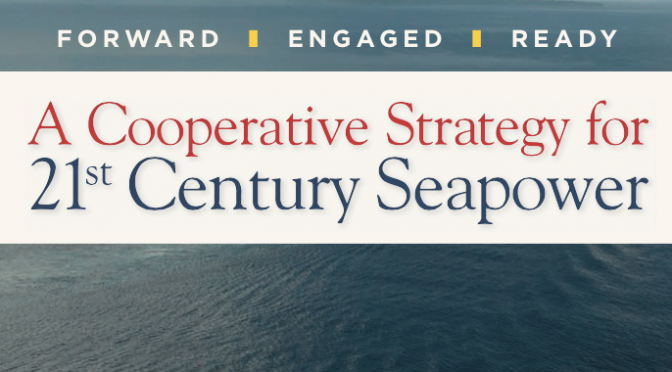 Editor’s Note: The U.S. Navy, U.S. Coast Guard, and U.S. Marine Corps today released the revised maritime strategy, unveiling it at an event at CSIS. You can download it here, and access a fact sheet on it here.

A Cooperative Strategy for 21st Century Seapower: Forward, Engaged, Ready (CS21R) is different from its 2007 predecessor in both tone and content in a number of critical ways. Some of the changes are merely those of diction, others those of new threats and previously ignored regions. Yet, all of these changes suggest an important evolution in the scope and attitude of the United States’ maritime services: the Navy, Marine Corps, and Coast Guard.

The Tone of CS21R is set early on as the document’s authors seek to explain why an adapted strategy has become necessary. First and foremost on this list is the budget, a note that mirrors the tenor of more recent strategy documents (see the 2014 QDR, for example), but is absent from the original 2007 version. Before the end even of the preface, written by Secretary of the Navy Ray Mabus, the document makes reference to fiscal constraints. And this theme remains an undercurrent throughout the white paper.

In addition to budget, the document is quick to remark on the increasing complexity of the world’s dynamic threat environment. This too is found in Secretary Mabus’ preface, and continues through the foreword (signed by all three maritime service chiefs) and onward into the strategy itself. And again in this way CS21R sets itself apart from its predecessor. As the Chief of Naval Operation noted at the launch event at CSIS, the 2007 document was the product of a vastly different environment. Multiple conventional carriers were still afloat, the United States was heavily engaged on the ground in both Iraq and Afghanistan, and cyber was not yet the buzzword it has become in policy circles. In many ways the original document was a product of a wartime environment, one broad in scope but nevertheless clear in direction and purpose. The revised strategy favors the term complex where the earlier document uses evolved, a small change in diction that perhaps suggests a greater uncertainty in the future responsibilities of the maritime services. Yet, tone only suggests so much. The document, which is slightly longer than the original, provides greater content and thus a more sophisticated representation of its purpose than its predecessor.

There are myriad ways one could parse the new document with respect to the old. It is vastly more robust in its attention to the cyber domain (which garners only side mentions in the 2007 version). It also pays far greater attention to Africa than the 2007 paper, which only mentions the continent once by name. In fact the revised version goes into far greater depth on all geographic regions, with a section (II) detailing each specifically. One unique change here is in a shift from the term ‘Asia-Pacific’ to a vastly more expansive ‘Indo-Asia-Pacific,’ defined as “spanning from the West Coast of the United States to the eastern coast of Africa.” (CS21R 3) This of course widely expands a geography the Navy in particular has had a growing interest in, though how it influences the rebalance to the Asia-Pacific is unclear. China still features heavily in the document, and the service chiefs all noted that the country weighed on their minds as the document evolved. It is likely in response to China, as well as threats posed by Russia and Iran, that induced one of the greatest changes to the document, the addition of “All Domain Access” as a pillar of seapower alongside the more traditional columns of deterrence, sea control, power projection, and maritime security. All domain access is defined as the “ability to project military force in contested areas with sufficient freedom of action to operate effectively.” (CS21R 19) This of course brings to mind anti-access/area denial (A2/AD) challenges posed chiefly by China, though the document indicates that this principle extends even into the cyber domain and the electromagnetic spectrum. (CS21R 21)

None of these changes will go unnoticed. Greater geographic specificity, the expansion of interest in securing the cyber realm, and the inclusion of a fifth pillar in the sea services’ conception of what seapower means are all ‘above the fold’ revisions to the original strategy. What may go unnoticed to those focused on traditional geopolitics is the documents marked increase in interest in maritime security. Human trafficking makes its debut in the revised document, while greater significance is given to those non-state threats mentioned in the 2007 white paper. The first section of the strategy detailing geopolitical changes since the publication of the first document is peppered with references not only to extremism and terrorism but also to transnational organized crime (TOC), the growing significance of population expansion in the littorals, and the threats posed by under-governed zones ashore.

As to be expected, each of the service chiefs highlighted certain portions of the cooperative strategy over others. When asked against what greatest threats the updated strategy was intended to prioritize, the Chief of Naval Operations pointed towards North Korea, Iran, Russia, cyber, and a host of non-state actors (mostly terror organizations such as Isis and Boko Haram). The Commandant of the Marine Corps also noted violent extremism, but leaned heavily on conventional threats such as Russia, China, North Korea and nuclear proliferation. The Commandant of the Coast Guard, however, highlighted throughout the launch event the primacy of a range of maritime security threats emphasized in CS21R. Chief among them was transitional crime, which the admiral estimates is worth $750 billion annually. The commandant also repeated the Coast Guard’s unique placement as a law enforcement operator with dozens of mutual legal assistance treaties negotiated across the world enabling easier Coast Guard access to littorals where other maritime forces may have operational restrictions.

International partners, most of whose navies are closer in scope and composition to the U.S. Coast Guard than the U.S. Navy, are a related component to this energized perspective on maritime security. The document makes continued reference to the need for partnerships, and Admiral Greenert noted at the launch that the document was already in the process of being translated to allow for greater dialogue with international partners. In West Africa, the Caribbean, Central America, the Middle East, and Southeast Asia in particular, many of these partners’ primary concerns are of matters of maritime security, terrorism, and organized crime. The Coast Guard’s partner programs in the South China Sea and its counter-narcotics mission in the Caribbean and Central America were highlighted in the event as examples of maritime security cooperation outside of the traditional navy-to-navy framework.

Finally, the document goes into greater detail than its predecessor with respect to implementation. Section IV on force design included components on force readiness and composition, personnel, strategic development, and capabilities. At the launch, Admiral Greenert noted that the strategy captures how the navy is organizing, equipping, and training its sailors in new ways. General Dunford made reference to personnel and training shifts to precipitate in the coming years, guided in part by CS21R, and Admiral Zukunft emphasized that the Coast Guard was on the threshold of the largest recapitalization effort in the service’s history.

In many of the most significant ways, A Cooperative Strategy for 21st Century Seapower: Forward, Engaged, Ready is not so much a revision but a replacement of its 2007 incarnation. Longer, more detailed, more expansive, and more inclusive, the revised document builds heartily on the framework established eight years ago, the result being a document distinctly different in both tone and content. While great attention will no doubt be paid to many of these differences, equally important if perhaps subtler changes were made regarding how the maritime services face non-state issues, including the illicit traffic in people, narcotics, and weapons. As CS21R continues the tropes increasingly familiar in strategy documents—budget uncertainty, evolving threat complexity, a shift towards the Asia-Pacific—it brings the maritime services into a more nuanced, if perhaps ambitious, vision of what seapower will mean in the future.

Since 2011 Joshua has served as the manager for research and analysis at Security Management International (SMI), an intelligence services provider in Washington, DC. Josh has co-authored several articles in the Journal of Counterterrorism and Homeland Security International with SMI associates. Since 2013 Joshua has also been a frequent contributor to spaceflightinsider.com, a member of The Spaceflight Group’s community of aerospace news websites. He is a PhD candidate at the University of St. Andrews’ Centre for the Study of Terrorism and Political Violence, where he researches maritime security. Joshua is a Summa Cum Laude graduate of The George Washington University where he received a BA in Middle East Studies from the Elliott School of International Affairs.

One thought on “The New US Maritime Strategy”