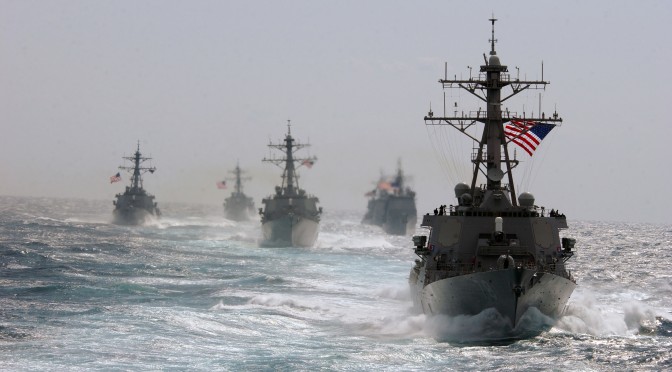 Ed. note: VADM Thomas S. Rowden, USN, provided this update from San Diego after his original article received the most votes in the run up to CIMSEC’s Forum for Authors and Readers (CFAR) of those pieces our readers wanted to see discussed in person.

Congratulations to everyone involved in CIMSEC, and thank you for all you have done to advance understanding and debate about Seapower, especially American Seapower. I am grateful to your readers for their interest in the piece I submitted earlier this year, “Surface Warfare: Taking the Offensive”, and I only wish my schedule had allowed me to join you for the “Forum for Authors and Readers” on February 26th [Ed note: videos online now]. Hopefully, this update will keep me in good standing among CIMSEC boosters.

We in the Surface Force are embarking upon a serious intellectual deep dive into the very nature of what we do and what we CAN do, an inquiry that seeks to capitalize upon the two of the most important attributes surface forces possess—mobility and persistence. Part of this inquiry is concerned with a concept we are developing known as “Distributed Lethality”, an idea that we were still forming when I wrote the piece above and referred to it as “dispersed” lethality. You can learn more about Distributed Lethality by reading about it in the January issue of Proceedings, or by watching the second half of my Surface Navy Association 2015 speech beginning at the 25:45 mark. Properly understood, Distributed Lethality combines an opportunistic and steady increase in unit lethality over time with innovative methods of operating those units together, the goal of which is to create a new range of operational problems for potential adversaries and hold numerous and diverse targets he values at risk. As I have written, increasing unit lethality without new and innovative operating patterns sub-optimizes the investment, while new and innovative operating patterns without enhanced unit lethality assumes unacceptable risk. Both activities are required for Distributed Lethality to have impact.

Working across the Surface Force—the Fleet, OPNAV, the Systems Commands, the training organizations, and ONR—we are looking at ways of getting more combat punch out of the platforms and payloads we already field by asking simple questions and then aggressively seeking answers. We are applying elements of the thinking of talented navalists like Captain Wayne Hughes and Captain Jeff Klein at the Naval Postgraduate School, CDR Phil Pournelle at OSD, and Dr. Jerry Hendrix at the Center for a New American Security to the real problems of resource constraints and evolving threats.

We are taking the long view on Distributed Lethality, aiming at a horizon of 2030 for our planning purposes but with steady progress from year to year and POM to POM. I spoke at SNA of this being a “generational” effort, and I meant it. There will not be a lot of splashy, overnight successes along the way; rather, there will a series of opportunistic capability upgrades where they make the most sense at the right times. But first, we must lay the intellectual groundwork for moving in this direction, and that is what will comprise much of the work we do in 2015.

A team of surface warriors across the enterprise is working hard to put meat on the bones of the articles and speeches made thus far, fleshing out the concepts and supporting concepts of Distributed Lethality, not to mention identifying the overarching concepts into which it must fold. Eventually, a small team will begin traveling to the numbered fleets and COCOMS to engage in a two-way dialogue designed to expose planners to what our thinking is, and to vest our concept development team with an updated appreciation of the operational factors most at play in the various areas of responsibility (AOR).

Additionally, we are working with the Naval War College to frame appropriate war-games and analytical venues to allow us to identify near-term, high-impact lethality upgrades and to ensure that our thinking is not in violent conflict with established methods of doing business. I frame the previous sentence the way I do because I am not ignorant to the possibility that what we are suggesting with Distributed Lethality could be potentially disruptive to current thinking about large scale maritime campaigns and war-at-sea. I honestly don’t think we would be doing our jobs very well if we weren’t constantly evaluating the status quo in search of more effective and efficient methods of delivering Seapower from the Surface Force. I hope CIMSEC readers would agree.

In the meantime, little victories are accumulating, and the logic behind Distributed Lethality becomes clearer. Earlier this month, Naval Air Systems Command and Raytheon conducted a test demonstration of a Tomahawk Block IV missile that received off-board guidance to intercept a moving surface target. Getting back into the over-the-horizon ASuW game is a central thrust of Distributed Lethality, and this interesting re-purposing of the Tomahawk is exactly the kind of opportunistic, straightforward capability upgrade that we seek. Think about the utility and flexibility of a Tomahawk sitting in a VLS cell that can strike fixed land-targets, moving land targets, or moving maritime targets. One missile, three very different targets. Apply that thinking across other munitions and projectiles, and we really begin to provide gritty operational problems to adversaries grown used to our defense crouch.

Before I close, let me once again reinforce the centrality of high value unit defense and Strike Group operations to Surface Warfare. Nothing we do in Distributed Lethality should be seen as taking away from our historic and necessary role in enabling naval power projection by helping to protect CVN’s and ARG’s. We start from the proposition that HVU operations and defense is our main mission, and then work to create operational problems with more lethal and distributed surface forces from there.  Our proposition is that the Surface Force can do more, and we’re going to take the time necessary to study and analyze that proposition in order to get it right.

Thanks again for the opportunity to provide this update, and keep up the great work. CIMSEC is establishing itself as an intellectual powerhouse in maritime matters, and I am proud to play a small part.