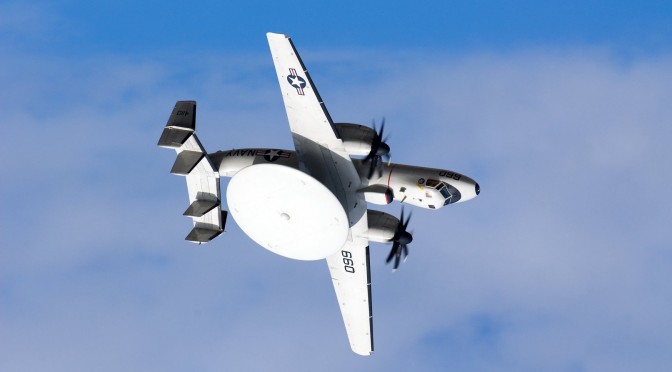 NORFOLK – In a controversial decision this morning, U.S. Secretary of the Navy Ray Mabus, former Governor of Mississippi and avid fisherman, has revealed that the Navy’s newest aviation command-and-control platform will no longer be performing its most important mission.

“In the wake of concerns from fishermen and environmentalists, we have decided to forego the Maritime Air-Borne Underwater Security (MABUS) capability in the E-2D Advanced Hawkeye. We recognize the changes that this will bring to the community, but are confident that our resilient officer aircrew and enlisted maintainers will provide the same kind of dedication to new mission sets as they did to MABUS.”

MABUS was first developed in 1998 and is widely hailed as one of the first true innovations from the Navy’s junior officer ranks.

“I think it was the 35th Taco Tuesday of deployment, and we were frankly getting pretty sick of it,” remembers former E-2C mission commander LT John “Bubba” Gump, USN (ret). “I bet Pig that I could catch us a fish and have the NFOs cook it up on the radar boxes in the back.”

LT Chris “Pig” Penn remembers it well. “That sonofabitch cost me $100. But he started a revolution in the community. That’s the day MABUS was born.”

Technically speaking, MABUS is an advanced maneuver that involves the E-2 rolling to an appropriate “reference heading,” using flaps and attitude to achieve the slowest possible airspeed, and then rolling inverted to make use of the large, ugly rotodome, that had previously served no purpose on the airframe, as a vessel for catching fish. Experts say that the radiation from the dome acts as a flash-fryer, causing the cooked fish to rise to the surface to be scooped up during a second pass by the dome, or by a second E-2 flying behind.

Mabus admitted that the decision was made after a recent fishing trip to Lee County, Mississippi.

“There I was, a pristine day on Elvis Presley Lake, when I feel a tug on my line. I’ve done a lot of things in my life, but the feeling I get when a big one is tugging on the line is quite possibly the best in the world.”

“So there I was, and I’m sure this is going to be a big catch. I start reeling in and I’m thinking of different ways to filet this sucker, when all of a sudden out of nowhere comes this big E-2, inverted, dome in the water about a mile away. I start reeling vehemently but the Hawkeye keeps trucking in closer and closer until finally, WHAM! and it was all over. Damn thing broke my fishing rod. And stole my fish.”

Mabus says that the Hawkeye crew will not face punishment, but will be responsible for replacement of his fishing rod and suit, also ruined in the incident.

A source close to the Hawkeye aircrew confirms that the officers will, indeed, make good on their promise to replace the Secretary’s suit, but that “it will probably be a knock-off from a vendor in Dubai.”

LT Roger L. Misso is a Naval Flight Officer (NFO) in the E-2C Hawkeye and former director of the Naval Academy Foreign Affairs Conference (NAFAC). The opinions and views expressed in this post are his alone and are presented in his personal capacity. They do not necessarily represent the views of U.S. Department of Defense, the US Navy, the E-2 community, his squadron, Paramount Pictures, Bubba Gump Shrimp Co, Tom Hanks, or the actor who played “Bubba” in Forrest Gump.