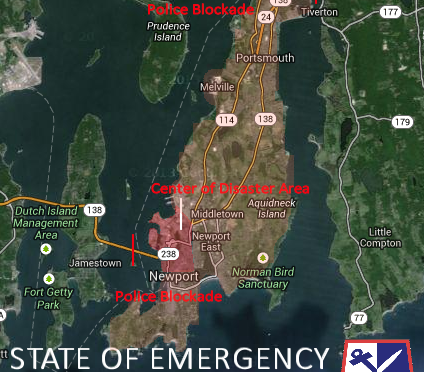 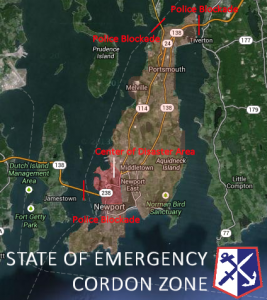 After what are being called a “series of industrial accidents,” Rhode Island Governor Henry Armitage declared a state of emergency today. Aquidneck Island has been cordoned off as a no-go zone centered around Downtown Newport and the Naval War College. General Thomas Malone of the Rhode Island National Guard has put out the call to mobilize the 56th Troop Command as well as the 43rd Military Police brigade as local and state police set up blockades on the Claiborne Newport Bridge, Mt. Hope Bridge, and Sakonnet Bridge.

The nature of the accident is unknown at this time, but before the current interruption in the island’s internet and land-line phone services, it was reported that cell reception had ceased as well. Observers as far as Providence have noted the smoke coming from across Narraganset Bay. Apparently, state authorities are ordering residents to evacuate to Fort Adams State Park or Portsmouth Highschool via loudspeaker on police helicopter.

In a strange garbled phone call immediately proceeding the disaster, a visiting professor from Miskatonic University, Professor William Dyer, claimed the cause of the yet-undetermined disaster started in the Naval War College itself. From what we could understand in the phone call, he claims that during Lieutenant Commander Wilbur Whateley’s oral defense of a dissertation on the use of DAta Global Online Network (DAGON) for a Combined Tactical HUb- Linked HUd  (CTHULHU) in Air-Sea Battle (ASB), a particularly long combination of acronyms inadvertently formed an “incantation” from a “purposely forgotten dead language.” Before Professor Armitage’s phone call was completely cut by static, the repeated phrase “Old Ones” was unmistakable.

Similar bizarre phone-calls in the minutes after the disaster reported what residents described as “unspeakable figures slithering through the fog.” In response to queries, General Thomas Malone claimed that some of the chemicals dispersed in the accident have a deleterious effect on the sanity of its victims, naturally explaining both the state of emergency and the bizarre phone calls before the disruption in telecom services. He also claims the cause of the event may have been obsolete storage facilities near the War College, explaining Armitage’s use of the phrase “old ones.”

As this report went to press, residents of Jamestown, RI reported a green glow emanating across the Narraganset Bay from downtown Newport. The sounds of heavy gunfire was also reported. Some wilder calls from the area allege a monstrous shape lurching through the night past Prudence Island and towards Providence. State authorities report this is merely the billowing smoke creating shapes in the night and definitely NOT the over-use of military acronyms pulling the thin veil off our fragile reality, allowing in unspeakable things the likes of which man was not meant to know.

Francis Morgan is a writer for the Miskatonic Post of Massachusettes.