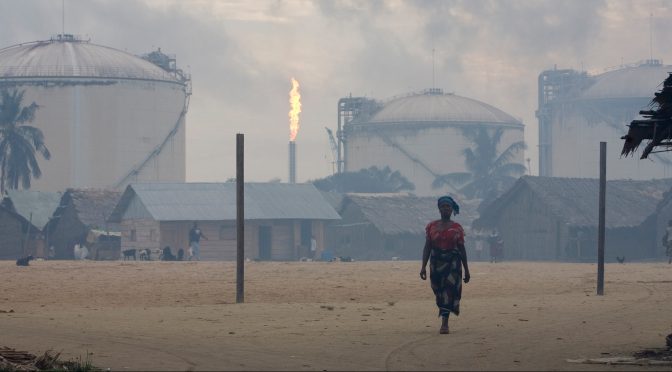 Within the oil industry, the presence of American multinational corporations have allowed the growth of otherwise improbable relationships and the promotion of U.S. values abroad. The presence of U.S. oil companies in the Middle East have allowed a line of communication to bridge the gap between the starkly different Western and Islamic worlds. American involvement in the Middle Eastern oil prospects began in post-World War I period as American business was eventually permitted under the British mandate. It was evident that U.S. military and economic power would be beneficial as the Middle East was unstable and its future looked to be volatile.1 Since the U.S. became involved in the oil scene in the 1920s, it has only used this connection to strengthen bonds between itself and Saudi Arabia. Despite the inherent benefits attributed to the multinational nature of oil companies, there are some considerable downfalls that must be taken into account.

With the power of oil companies as influential multinational corporation comes the risk associated with such a unique diplomatic tool. Foremost, oil is a constantly dwindling natural resource that doubles as a crucial economic commodity. Since the United States is not a primary source of oil production, it must rely on other foreign oil producers. Any fluctuation in foreign industry can plunge the world into recession. The delicacy of oil dependence in the world is not as apparent as it was during the Arab Oil Embargo of 1973. The sanctions forced upon the U.S. by OPEC as retribution for allying with Israel crippled America’s supply of oil. In turn, this also drove up the price of oil and gasoline to quadruple the price prior to the sanction.2 This crisis demonstrated the power Saudi Arabia derived from its oil production and the United States’ lack of oil control. Although the United States reduced its dependency on Arab oil after this incident, it became apparent the importance of American corporations maintaining viable and open relationships with foreign countries. The economic and military relevance of oil was underscored once more in 2002, as Saddam Hussein used his control of oil processing as leverage during military campaigns. His threats to destroy oil platforms were met with the response of special warfare to ensure that his rogue actions would not cause an economic recession in the midst of the Iraqi conflict.3

Prior to the U.S. invasion of Iraq, American multinational oil corporations were involved in humanitarian aid efforts to try to quell the mistreatment of the civilian population. However, this initiative, known as the Oil for Food program, devolved into an international scandal in which American corporations like Chevron received illegal kickbacks which undermined the goal of transmitting food to a population crippled by United Nations’ sanctions.4 The fact that Chevron was manipulating this program to its benefit demonstrates the possible risks associated with using multinational corporations as means for diplomacy.5 Multinational corporations are subject to the whims of their executives, thereby allowing for their private ethical perspectives to drive the corporation’s representation of American ideals in foreign states. Despite the bad reputations evoked by some multinational corporations, the overall purpose of these businesses is grounded in their desire to spread American interests abroad.

One of the most influential examples of the positive power of multinational corporations is direct advancement of African civilizations in Chad by ExxonMobil. American interests in Africa peaked following World War I, but were overshadowed in the years since, until 9/11. Africa was not of strategic interest to the U.S. until it was determined that it was a breeding ground for radicalized terrorists. Prior to the unfolding of 9/11, ExxonMobil explored Chad as an option for oil extraction. These plans for extraction detailed that how the country was to develop its infrastructure, education, and healthcare through the use of the money received from taxes and royalties from the oil produced.6 By investing in Chad, Exxon-Mobil was able to provide about $4.2 billion dollars of aid, whereas the United States was only providing about $3 million dollars of aid to the area.7 The United States’ positive presence in the area allowed for a smooth transition of American military and state presence in the years following 9/11, as the CIA established stations in the area to monitor and track terrorist cells thought to have been left over from Bin Laden’s time in Sudan during the 1990s. Whereas the military and state was primarily focused on missions regarding terrorist activity, Exxon was involved in turning their business aims into an opportunity for eliminating poverty in the region. The bonds forged between Exxon and the local population prior to the introduction of American operatives in the region made this transition much easier than if Chadians had no prior interactions with American people. This may be just one case study of the impact of the diplomatic power of an American multinational corporation, but it exhibits the mindset of the American business owners to further American ideals abroad.

Monica Sullivan is a 3/C Midshipman at the United States Naval Academy. She majors in Political Science with a minor in Spanish language. In her free time, Monica enoys singing with the Protestant Chapel Choir.

4. “Chevron to Pay $30 Million to Settle Charges For Improper Payments to Iraq Under U.N. Oil For Food Program.”