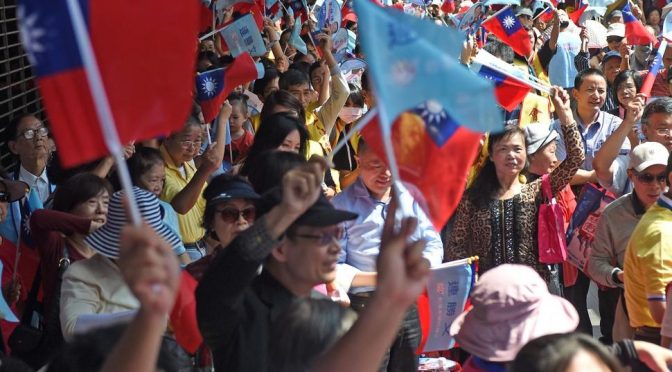 A growing China is shifting the balance of power in East Asia. The question remains: Should the U.S. engage or contain China’s rise? Containing a country of 1.3 billion people will be a costly option, economically and militarily. Joseph Nye at Harvard University warns that if the U.S. continues to treat China as the enemy, then they are certain to have an enemy.1 Thus, it is in the United States’ best interest to pursue positive relation with China.

One of the most pressing issues that stands between the U.S.-China relation is Taiwan. Reunification with Taiwan is deeply rooted within Chinese nationalism, and many see the island as stolen land that needs to be returned to China. On the other hand, with a growing national identity and political differences, Taiwan aims for independence. There are three most likely outcomes in this conflict: Taiwan declaring independence, maintaining the status quo, or reuniting with China. In order to maintain positive relation with China, the U.S. should not bolster Taiwan’s confidence to declare independence.

China is bent on reunification because it is essentially their unfinished civil war. Zhu Bang Zao, the spokesperson for the Chinese Foreign Ministry, made their stance very clear: “Taiwanese independence is equal to war.”2 Zhu reaffirms that China wants a peaceful solution to reunify with Taiwan. For that reason, they are patiently relying on the forces of economic integration.

At the same time, the survey conducted by National Chengchi University in Taiwan reports that 80 percent of the respondents prefer the “status quo”3 in relation with China; however, Taiwanese are not willing to pursue independence at all cost. When asked to choose either establishing formal independence or maintaining economic ties with China, 83 percent chose the latter. It is clear that although both parties articulated different futures for Taiwan, neither want an armed conflict. The commitment to a nonviolent solution forces both Taiwan and China to operate within a gray area of quasi-independence. It is not the U.S.’ job nor is it in the U.S.’ interests to define that gray area. U.S. military intervention could ignite a global conflict and push China to be more aggressive than it actually is.

The U.S. Role in the Cross-Strait Relation

Until now, the U.S.’ stance towards Taiwan is best described as a balance of optimism and realism. The United States accepted the One China policy but signed a treaty to defend against Chinese military aggression. Deputy Secretary of State Antony J. Blinken stated that Taiwan “showed the world what a mature, Chinese-speaking democracy looks likes.”4 The U.S. hopes that this beacon of democracy can influence China’s transformation. That is also the exact reason why China is fixed on reclaiming Taiwan – Taiwanese independence threatens the current regime. Despite the admiration, the U.S. is not committed to going to war with China over Taiwan, and for good reasons. Thus, the U.S. should not bolster Taiwan’s confidence by overpromising and underdelivering in the future.

In the foreseeable future, it will be difficult for Taiwan to obtain full independence based on recent trends. Taiwan’s economy has become deeply intertwined with China in the past 15 years. The British Office reported that in 2015, China absorbed around 30 percent of exports, making it the largest trading partner for Taiwan.5

Additionally, China is said to be capable of launching a military invasion by 20206, but that does not mean that they will. Furthermore, China’s actions are consistent with its commitment to a nonviolent solution in Taiwan by adopting the Nuclear No-First-Use policy and relying on the slow but steady economic integration. As Erik Eckholm, Beijing bureau chief for the New York Times states, “the number one principle – if you are a Chinese leader – is not that you have to regain Taiwan in the next five years. It’s that you can’t lose Taiwan.”

Currently, Taiwan spends less than 2 percent of their GDP on military spending.7 Thus, the small island will be relying on foreign powers to come to its defense. If Taiwan, convinced of U.S. support, declares independence, this will lead to war with China. There are two paths with one likely outcome. One, the U.S. fails to come to Taiwan’s defense, and China invades Taiwan, forcing reunification under Chinese terms. In this outcome, the U.S. will lose credibility among allies in the region, and it can cause China to become more belligerent. Two, the U.S. enters the fight to protect Taiwan, draws in the rest of the world, and starts another global conflict. No matter the victor of the war, Taiwan’s economy and infrastructure will be destroyed. It will break the U.S.-China relation, causing an economic slowdown in the global economy. Considering the consequences, the two countries are dedicated to peaceful solution, and the U.S. should follow suit.

In the meantime, the U.S. should avoid instigating aggression from the Chinese towards Taiwan. The U.S. should honor the Taiwan Relation Act in 1979 and promote diplomatic, cultural, and economic exchange; however, the U.S. must not directly engage in armed conflict with China. The U.S. can continue helping Taiwan maintain the status quo by selling weapons and expanding trade treaties. Taiwan has some time to build up their defense and economy to stand on equal footing with China, giving Taiwan more power when negotiating with China about how to define the gray area.

This strategy allows the U.S. to maintain a salvageable relationship with China without completely abandoning Taiwan. The U.S. can rely on regional allies to develop a check against Chinese power by strengthening defense treaties and diplomatic ties. If China throws their weight around, it will naturally encourage check and balance behavior from their neighbors. But without U.S. presence in the region, they are likely to jump on the Chinese bandwagon.

As China grows stronger, it will be more difficult for Taiwan to gain independence. The cost of defending Taiwan will also increase for the United States. The best scenario for Taiwan would be to accept the one country, two systems policy, while negotiating for better terms. The United States’ presence plays a large role in helping Taiwan maintain the status quo. But recognizing that the island’s de facto rule will not last forever, the United States needs to be prepared to lose Taiwan or fight China. Both economies will suffer greatly in an armed conflict. Thus, maintaining good relations with China is a better outcome for everyone. However, losing Taiwan doesn’t mean the U.S. will lose their foo hold in East Asia. As long the U.S. focuses on strengthening ties with regional countries, the U.S. can still plant its feet firmly in East Asia.

Born to Chinese parents in Vietnam, Jenny Vuong naturally developed an interest for international affairs. At the University of California Irvine, Jenny is the student ambassador in the Dean’s Council for the School of Social Sciences. She is also the Resident Advisor to the freshmen Global Perspectives hall. During her second year, Jenny studied abroad in South Korea for a year, where she interned for People for Successful Corean Reunification Organization (PSCORE). In Fall 2017, Jenny will study abroad again in Yokohama, Japan. She is looking to pursue a Ph.D. in international relations with a focus in East Asia. In her free time, Jenny enjoys cooking, learning new languages, and playing tennis.

Bang-Zao, Zhu. ” Why the Taiwan Issue is so Dangerous.” Interview. PBS. September 2001.