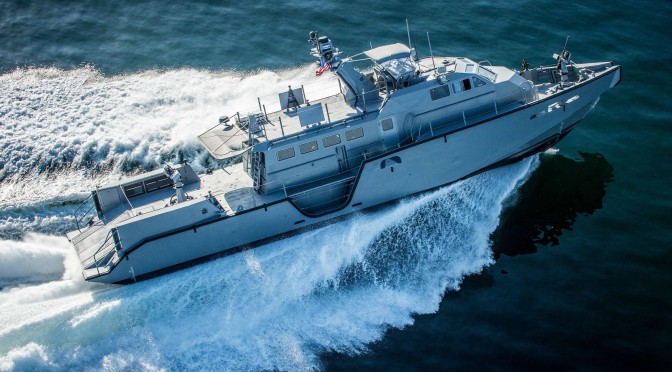 I recently had the privilege of being a part of the delivery of the first two new 85 foot MK VI Patrol Boats to the US Navy’s 5th Fleet Command in Al Manama, Bahrain. These new patrol boats, manufactured by SAFE Boats International, may phase out the Cyclone class Patrol Boat which has proven itself far too costly in maintenance and upgrades. The new MK VI is less expensive with a purchase and lifetime maintenance cost of approximately $15 million. The MK VI is a far superior craft in every way giving the US Navy an unbelievable superiority on the water when performing Coastal Warfare and Interdiction operations.

The MK VI can fit a crew of 10 with eight passengers, each with their own gas shock seats. The MK VI is armed with 6 crew-served weapons stations that can fit anything from a M2 .50 Cal to M134 mini-guns. The new craft has two remote operated MK38 MOD 2 25MM weapon systems. There is also talk of mounting a guided missile weapons systems as well. In addition to its weapons compliment, it has the capability of stern launching RHIBs, AUVs, or land Marines on a beach when the mission calls for using the boat’s shallow draft capabilities and stern drop ramp. It is built to withstand a 7.62 round over certain critical points.

It should also be noted that this vessel has more than just weapons and payload capabilities. After an extensive walkthrough of the interior it is worth noting that this is a truly modern vessel equipped with a command, control, communication and computing, surveillance and intelligence (C4SI) suite to work through any situation at sea. The vessel is equipped with VHF, MF, UHF, and internal communications through integrated headsets. The communications system is neatly arranged in a server tray inside the cabin which provides access for troubleshooting while underway. The navigator has a real time electronic chart plotter on a flat screen mounted in front of them, and the coxswain gets a futuristic chair with throttles and multipurpose joysticks integrated into the armrests.

The engine compartment is a modern space that provides ease of access to dual MTU diesel power plants, HVAC systems, and generators. The engineer also has their own seat with a complete console system that provides real time information through a mounted flat screen. There is a bench seat in the main cabin that is used as a medical triage station for the on board medic.

The new MK VI boats will operate as pairs, increasing both available firepower and mission support. Top speed can be in excess of 35 knots but it should be noted that while this can be achieved in unfavorable sea conditions, it has proven to be a safety issue while conducting sea trials. The patrol boat can conduct duration operations of around 24 hours or 600nm in a stretch as prescribed by the overseeing command, but my tour guide did inform me that with coordinated UNREP’s and working alongside a larger vessel such as the Littoral Combat Ship it can do well beyond the 24 hour mark without issue. For those missions that push the 24 hour mark, the patrol craft comes outfitted with a head, shower, and a galley with an integrated coffee maker for increased morale.

As exciting as it was to learn about the new MK VI’s specifications & capabilities, the most important subject surrounding this new patrol boat is what it is going to do operationally. My guided tour of the vessel was led by not only a technician of the MK VI but an actual boat team leader that will be working aboard the new patrol boat. Understanding this and the individual’s background, I candidly asked him what kind of work he thought he might be getting into. My guide provided me with the standard response of contingency op plans, South China Sea operations, Persian Gulf operations, Navy VBSS operations, and Marine MEU deployments. He did also mention that this craft would not be conducting HVA escorts, but stated that we shouldn’t hold our breath on that one. As we dove a little deeper in dialogue we started hashing out some great ideas on how to increase the patrol boats interdiction game and how to stop the ever increasing maritime human, weapon, and drug trafficking throughout the globe. We also sought ideas of how to quell the issues with pirates throughout the Gulf of Guinea and Malacca Straits. With all these interdiction opportunities we looked at teams that could carry out the mission successfully. The initial idea of having a Navy VBSS or USMC MEU team aboard could work but their overall capabilities are not as specialized for countering the problems stated above. The employment of SEALs, Marine Recon, or MARSOC teams could provide that specialized approach needed to subdue our enemies on the water. Often times these teams are being underutilized for interdiction operations since there is still plenty of work to be done on land.

After running a complete analysis on possible teams that could provide the type of interdiction capabilities needed to suppress various issues on the water, I mentioned using the US Coast Guard. Shortly after, we walked ourselves into the idea of using US Coast Guard personnel aboard the MK VI for interdiction operations because of their explicit maritime law enforcement capability that entail broad authority and jurisdiction. The US Coast Guard working alongside the US Navy is nothing new and has a proven track record of success. US Coast Guard LEDET’s have been leading the way in this type of interdiction operations for more than 30 years, using mostly larger platforms. The new MK VI is fast, maneuverable, and can stern launch a RHIB which can be operated by US Coast Guard Maritime Security & Response Team (MSRT) Tactical Delivery Team (TDT) Coxswain.

With ever increasing illicit trafficking on the waters and unchallenged piracy in places other than the Horn of Africa, the US Coast Guard has a chance to shine by using its best maritime interdiction capabilities through their Deployable Specialized Forces (DSF) teams. When it comes to the US Coast Guard DSF teams, two in particular come to mind that excel in this type of mission. These teams can operate either integrated or alone to achieve the best end results for the mission. First are the USCG Tactical Law Enforcement (TACLET) Law Enforcement Detachments (LEDETS) who are masters of their craft when it comes to interdiction operations. They can manage an entire interdiction operation from analyzing pertinent intelligence all the way through transferring detainees and seized vessels with a case package that can either aid local authorities in prosecution or our own federal prosecutors. They have proven themselves time and again while working the counter drug mission in SOUTHCOM, VBSS missions in Persian Gulf, and Anti-Piracy operations around the Horn of Africa.

The second team that comes to mind are the USCG MSRT Direct Action Section (DAS) Teams. DAS Teams are perhaps the most tactically proficient operators the USCG has to offer. DAS Teams can effortlessly board and take control of a vessel in minutes. Alone, DAS teams can work to take down the most dangerous trafficking vessels. Alongside a LEDET, DAS Teams operate with an excellent level of law enforcement experience and capability to ensure every mission is conducted with the most stringent legal standards. If these new patrol boats were to host a CG team aboard, we could see a new relationship be forged between the US Navy and the US Coast Guard which would come at time when it most needed to be continued since the exit of the frigates.

These patrol boats are the next generation littoral combatants for the Navy. Once the fleet get its allotment of MK VI’s and employs them alongside a Littoral Combat Ship, the naval force will be able to actively stem problems from where they begin.  If these new boats are to make an impact on the world through their capabilities, they have to be used and tested in ways that might have not otherwise been conceived when designing the craft. For the Navy to understand these craft, they must put them to work, push the limits, and listen to feedback from the operators on the frontline.  The US Navy has a great chance to enhance its capability by diversifying its originally conceived missions with the new MK VI.

Lawrence A. Hajek is a Managing Partner at Condition One USA, a private security & training firm in Virginia.  Previously he served active duty with the US Coast Guard’s Deployable Specialized Forces as a Tactical Law Enforcement Team South LEDET Boarding Officer & later as a Sector Boarding Officer conducting Homeland Security Operations. He is a subject matter expert on Maritime Interdiction Operations and the International Ship & Port Security Code.

4 thoughts on “MK VI: The Next Generation of Interdiction”