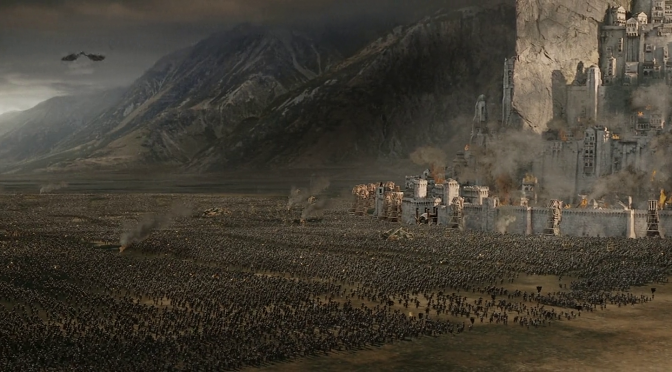 I’ll get this out of the way right off the bat: Sauron should have posted guards at the entrance to Mount Doom. He should have posted lots of guards, and only his best guards. They probably wouldn’t have understood why they were there, but when you work for an all-seeing demon lord, you don’t ask too many questions. Even better, Sauron should have sealed off the entrance entirely. What else could he have possibly needed to do in the Cracks of Doom? It’s not like he could get nostalgic and visit the place where he forged The One Ring, he had no corporeal form!

Ignoring that rather glaring oversight, it’s time to approach Sauron as a misunderstood, but rational, actor. While Sauron was bent on the domination of all the Free Peoples of Middle Earth, his approach to making war on them was far from a series of swift and terrible retaliations (as Gandalf described it), but rather cooly calculated moves made based on lessons learned from previous defeats. However, just like any rational actor, he was prone to emotionally-driven lapses in judgement.

A thousand years before Frodo and Sam were born, the Lord of Barad-dûr had lost fair and square in a conventional war, a catastrophe that ultimately resulted in his physical destruction (portrayed as a brief flashback in The Fellowship of the Ring). In that age, Sauron attacked the realms of Men, taking a major city but then only slowly choking off others. In the mean time, sensing that neither race could defeat Sauron alone, the great Elven and Human leaders forged the Last Alliance. Behind the protective veil of the Misty Mountains, they massed armies for three full years. By the time they met Sauron’s armies in battle, the Alliance was well equipped and trained. Sauron had essentially let it happen, having overreached himself in launching the war in the first place.

The Dark Lord had bet the farm (well, not the farm – nothing green grows in the the Land of Mordor where the Shadows lie) that the international community of Middle Earth would accept his annexation of the human cities upon the plains adjacent to Mordor. His army was greater than that of any given kingdom or any given race, and assumed that their raw numbers and often terrifying forms would deter an organized response. In the end, he could only watch helplessly as the allied forces of the Free Peoples massed just out of reach, much as Hitler stared across the English channel or Saddam Hussein across the empty deserts of Saudi Arabia.

The Necromancer of Dol Guldur would make no such mistake in his next attempt at world domination. He waited for a divided and weakened Middle Earth, for a time when the Fair Folk, the regional hegemons, had made the decision to abdicate their position and retreat across the ocean. Gondor was plagued by poor governance and was unable to maintain alliances with the other kingdoms of Men, many of which proved quite amenable to Sauron’s corruption. The Dwarves had suffered from what were essentially anthropogenic (dwarf-ro-pogenic?) environmental disasters, with both their shining underground cities of Moria and Erebor destroyed by greed. The Dwarves who had reclaimed the Lonely Mountain were too few to fight anything but a holding action against Sauron’s allies. In other words, it was the perfect time to strike.

Thankfully, the Free Peoples had a few strokes of good luck along the way. Although the Elves had one foot out the door, they had enough foresight to retain an expeditionary fighting force, which proved critical to defeating the armies of the White Wizard Sarumon. On the Pelennor Fields below the White City Minas Tirith, the emergence of a strong leader in Aaragorn was enough to sway a neutral third power (the Dead Men of Dunharrow) to commit to the fight. Even all that, however, meant that the allies were on the brink of defeat, and it was here that Sauron started making mistakes.

Allied forces were sorely depleted after their victories. They had defeated only the first of Mordor’s armies, with most of Sauron’s casualties being proxy forces, such as Sarumon’s hordes and the wicked Southron Men. Éowyn may have slain Mordor’s top general, but there were eight more where he came from. Mordor had an impossible-to-beat edge in force generation, with armies of Orcs emerging ready to fight from the caves every day. In contrast, it could take months to train a young man to fight, and the training pipeline for an immortal Elven archer could easily be decades long! Sauron had nothing to fear from the allies’ conventional fighting force, and everything to fear from a pair of Hobbits.

As is usually the case with tyrants, Sauron’s foreign intelligence apparatus was primarily built for his personal security. The Ringwraiths could travel where his fiery gaze could not, and they had successfully located the Ringbearer Frodo on multiple occasions. In fact, their last positive identification of him was a mere handful of days before the battle of the Pelennor fields – Sauron knew the greatest threat to his survival was essentially at his gates. Furthermore, in a scene ultimately cut from the theatrical release of The Return of the King, Sauron’s chief negotiator reveals that they had recovered Frodo’s Mithril armor from the outskirts of Mordor where he was briefly captured. At this juncture, Sauron managed to do exactly the wrong thing.

Perhaps still fuming over the near thousand-year old memory of losing by giving the enemy time to regroup, he bit hard onto Aaragorn’s bait. The entirety of Mordor’s fell armies poured out of the Black Gate to achieve victory once and for all, or so it seemed. In the mean time, the one and only thing that could have destroyed him slipped right on by and promptly did so. Sauron had snatched defeat from the jaws of victory.

Sauron had many options available to him. At a minimum, he could have delegated command of the situation to his Nazgûl. He had forged a tight and incredibly enduring relationship with his commanders. So what if that relationship started because they were enslaved to his will by demonic jewelry? Aaragorn’s tiny host at the Black Gate did not demand the full attention of his Eye, especially when he had credible information that the Hobbit threat had penetrated Mordor itself. Frodo could only have one objective inside Mordor, and instead of maintaining the fiery gaze upon the ashen approaches to the Mountain of Fire, Sauron got a case of what aviators call “target fixation”. Had Sauron trusted his generals to dispatch the host, he would have almost certainly found Frodo. Even more conservatively, Sauron could have chosen not to meet Aaragorn in battle at all. The Hobbits could only have survived so long inside Mordor if the entire Orc army had been searching for them. A delay of days, a week or even a month would have cost Sauron little in the long run and would have guaranteed his personal survival.

Ultimately, I have to sympathize with the guy. Sure, his entire existence was about enslaving and subjugating, but anybody in the Western intelligence, military or police communities can relate to him. After all, we share a problem set: the possibility that one, maybe two unassuming and outwardly nonthreatening people could cause a catastrophe in our homeland.