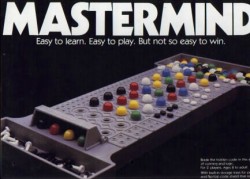 THIS ARTICLE WAS ORIGINALLY PRINTED ON MAY 3, 2013 AND IS BEING RE-PRINTED FOR “CHALLENGES OF INTELLIGENCE COLLECTION WEEK.”

For many, the game Mastermind is their first adolescent introduction to cryptology.  A code-breaker is given limited turns to discover the encrypted signal of the code-maker.  By choosing to put AFRICOM bandwidth over state-controlled Chinese satellites in 2012, the U.S. Defense Department decided to extend their PRC opponents exponentially more “rounds” to win the game.  The U.S> has won a tactical convenience at the cost of strategic peril.

Defense Department representatives claim the use of the satellites was secure due to the encrypted nature of the transmissions.  However, as in Mastermind, more exposure reveals more information, with which the code-maker can be beaten.  With an unrestricted treasure-trove of data, the cyber-battle proven Dirty Data Dozen of Chinese cyber-warfare will have plenty of material to compare and contrast until base patterns are found and exploited.  This vulnerability is especially worrisome in an area of responsibility rife with corruption issues and general penetration by state-associated Chinese assets.  That access to the satellite transmissions might be doubly useful because of the potential access to the pre-transmitted data, further easing decryption efforts.  This undermines force-wide communications, providing information that will end up not only in the hands of the Chinese, but the actors with whom their intelligence services cooperate.  The U.S. stands not only to lose one game of Mastermind, but most of the tourney.

It was only last month that the CNO, ADM Greenert, said that the cyber-EM environment is “so critical to our national interests, that we must treat it on par with our traditional domains of land, sea, air, and space…”  The EM-cyber spectrum may be invisible, but they have the same space constraints as those traditional domains.  During the Cold War, if the berths at Bremerton were full, the U.S. Navy would never have requested berthing space in Vladivostok; if the U.S. Army found itself under-equipped, they would never request use of radio towers in East Germany to communicate with West German patrols.  Resources are limited and must be rationed; put simply by Raymond Pritchett, “If this wasn’t the point to tell someone ‘no’ when they ‘needed’ bandwidth, what point is?”  Refusing to prioritize the strategic long-term viability of U.S. communications security over temporary tactical comfort is the laxity alluded to by the CNO when he highlighted the need for a new attitude.  We can start with the lessons learned from a 1970’s board game.

3 thoughts on “AFRICOM’s Chinese Satellites: How To Lose At Mastermind”