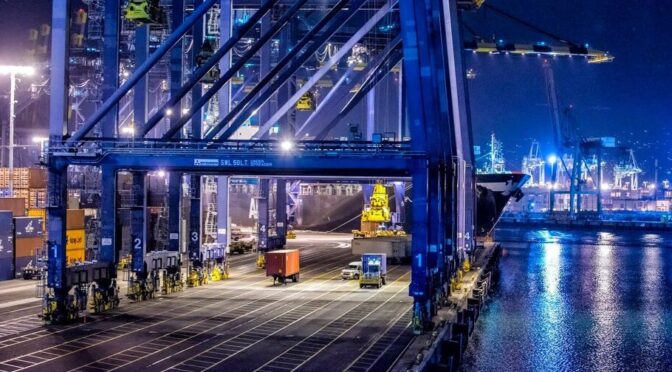 Last week CIMSEC featured a series of pieces submitted in response to our call for articles on maritime infrastructure and trade, issued in partnership with Maersk Line, Limited as a part of Project Trident.

Authors highlighted the dynamic and ever-evolving nature of the global maritime system. A burgeoning volume of maritime trade and commercial vessels is traversing the world’s oceans and driving globalization to new heights. Maritime infrastructure is being upgraded time and time again in a bid to keep pace. But as the global community reaps the benefits of maritime exchange, the scope of threats is becoming more multi-faceted.

The deep interconnectedness of global maritime infrastructure is paralleled by the close connectivity of its cyber dimensions. Cybersecurity for maritime facilities remains a point of concern for global shipping firms and those who depend on their supply chains. Meanwhile, efforts to decarbonize maritime infrastructure, especially shipbuilding, will lend themselves toward an uneasy transition away from traditional fuel sources. China’s globe-spanning efforts to invest and procure maritime infrastructure is raising eyebrows and underscoring the nation’s commitment to becoming a global maritime superpower. The question of how China could use these assets to employ coercive leverage remains a concern. And as the blockage caused by the Ever Given demonstrates, an incident involving a single ship in a critical maritime space can grab headlines, choke off billions in trade, and send far-reaching disruptions into economies.

While threats are changing and the maritime system is rapidly growing, an important constant endures. Growing global prosperity is inseparable from maritime infrastructure and trade, and careful tending of the maritime system will prove indispensable for continued human progress.

Below are the authors who featured during the topic week. We thank them for their excellent contributions.

“This U.S. mandate is a hard law, both clear and enforceable. To meaningfully address known cybersecurity vulnerabilities across the world’s port facilities, the member states of the IMO should collaborate and amend Part A of the ISPS Code to include a similar mandate. By hardening the law in this way, member states can establish a consistent, uniform enforcement framework and thus, begin to harden port facilities against cyberattacks.”

“How the Decarbonization Dilemma Will Impact Shipbuilding and Great Power Competition,” by Benjamin Clark

“…the security-related risks of the United States pursuing decarbonization merit further scrutiny, especially with respect to decarbonization’s impact on the shipbuilding industrial base and its ability to contribute in a protracted great power conflict.”

“The People’s Republic of China (PRC) has embarked on a massive investment spree and established a meaningful stake in the control of global maritime infrastructure…There is growing concern that the PRC has, or could, use its investments to deny infrastructure access to its rivals.”

“All of One Company: The Need to Forge a Stronger Bond Between Navies and Commercial Shipping,” by Peter Cook

“Major powers are never going to be able to significantly alter the ratio of warships to commercial vessels, so they must seriously revisit the strategy for how the protection of trade is conducted in peace and in conflict.”

“… ships traveling between Europe and Asia piled up in the anchorages off Port Said and Suez, hoping that the Suez Canal Authority, and eventually SMIT Salvage, could clear the containership and allow a resumption of normal trade. Her removal after six days opened the floodgate of vessels looking to traverse the canal and resume the international flow of goods and allow military vessels…to perform their missions. But behind the veneer of memes and jokes the grounding of Ever Given exposed the fragile nature of global trade and the maritime infrastructure that supports it.”