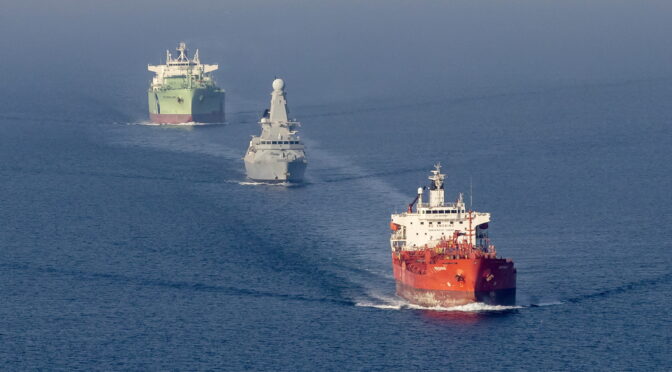 In his authoritative tome Seapower, Geoffrey Till observes that navies “have to work alongside rather than regard themselves as distant from and somehow superior to many other maritime stakeholders with their grubby little concerns.” Mariners indeed need to be “all of one company,” as Drake recommended.”1 As the world’s navies dramatically shrink relative to the ever growing fleets of commercial shipping cousins, they should take time to understand their fellow maritime stakeholders and make themselves “all of one company.” Major powers are never going to be able to significantly alter the ratio of warships to commercial vessels, so they must seriously revisit the strategy for how the protection of trade is conducted in peace and in conflict.

Since humanity devised methods for crossing bodies of water (starting with rivers and lakes, then seas and oceans), people have been carrying items from one side to another as gifts, or offerings, to barter and trade. This symbiotic movement is synonymous with the development and emergence of civilizations, and the building of great nations like the United States and China. Today, more than 80 percent of all trade is moved by sea, which makes seaborne trade a crucial backbone of the global economy and human progress.

In comparison to the thousands of years of continuous commercial seaborne exchange, formal standing navies are relative newcomers. For centuries the principal reason for having a navy was to protect merchant ships from criminal activity, like piracy. It was the maritime explorer kingdoms of Portugal and Spain that established the first standing navies, followed by the burgeoning northern European trading nations. King Henry VIII’s break with Rome and the dissolution of almost a thousand wealthy monasteries funded the building of what would become the British Royal Navy in the 16th century. From their inception, navies have been intrinsically linked to the economic development of a country, and in England “The navy served the City of London, not the crown.”2 Similarly, the U.S. Navy was initially formed to defend U.S. trade passing through the Mediterranean against Barbary pirates from North Africa. According to Lincoln Paine’s excellent book, The Sea and Civilisation, the forming of a naval force was based on the “naval-commercial complex” 3 being the dominant characteristic of economic growth from maritime expansion.

Despite most democratic maritime nations listing “protection of trade” or similar phrases within their core purposes of maritime strategy, it seems that this driver is often overshadowed by political maneuvering, demonstrating that “The modern world takes the free use of the seas for granted and assumes shipping services are wholly detached from national policy.”4

It is useful to look at the composition of the modern maritime space. The principal driver behind commercial shipping fleet size and shape is derived demand5 driven by the consumer. As the global population continues to swell and the worldwide consumer class grows, the demand for manufactured goods, foods, and fuel increases at a voracious rate. The requirement for more vessels carrying cargo, moving passengers, catching and processing seafood, extracting and producing fossil fuels, mining rare metals and blue biotechnology from the ocean and seabed increases rapidly.6

Today, around 1.6 million seafarers crew the 98,140 oceangoing cargo vessels, carrying over 11 billion tons of cargo, including 811.2 million twenty-foot equivalent units (TEU) containers handled worldwide, and passing through more than 5,250 ports.7,8 There are 4,428 passenger-carrying ships (cruise ships and ferries),9  around 4.6 million fishing vessels (including artisanal, coastal and ocean going),10 and approximately 25 million11 pleasure craft across the world in 2019. This makes for extremely complex and dynamic global trade routes and coastal areas.

The increasing demand for new cargo ships ensures a busy shipbuilding industry, which in 2019 launched a staggering 66 million GT of new shipping, which is the equivalent tonnage of roughly 660 U.S. Nimitz-class aircraft carriers.12,13 Almost all new merchant ships are constructed in East Asia (China 40 percent, Republic of Korea 25 percent, and Japan 25 percent), whilst the remaining 10 percent of ships are built in shipyards across the rest of the world.14

By comparison, the main naval powers’ fleets are shrinking.15 While systems, sensors, and weapons are undeniably more capable, the ratio between the number of naval platforms available to protect sea lanes and the quantity of commercial vessels is becoming more and more disproportionate.

There was a glimpse of how the interaction between navies and commercial shipping can work very successfully for a specific problem, providing some valuable lessons. During the period of Somali piracy (2008-2012), three separate international naval coalitions were established, demonstrating unprecedented cooperation and collaboration between different navies to counter the piracy threat. Additionally, the naval coalition commanders, and leaders of the shipping industry and marine insurance industry formed the Senior Leadership Forum, which held periodic meetings at a naval headquarters near London to discuss strategic and policy issues related to Somali piracy.

From late 2008 the naval coalitions and shipping industry worked together in the quarterly Shared Awareness and Deconfliction (SHADE) Group meetings in Bahrain, allowing all parties to discuss the operational situation with naval commanders in the region. At the tactical level, the Royal Navy’s UK Maritime Trade Operations (UKMTO) organization provided a “911” first responder-type service to merchant ships entering the Western Indian Ocean, briefed masters’ and crews visiting UAE ports, and assisted with the coordination of maritime forces when piracy attacks happened.

The formation of these tiered levels of liaison and interaction between the naval coalition forces and the shipping industry paved the way to the suppression of Somali piracy by mid-2012. The structure was also regarded by many senior naval officers as a fascinating and edifying experience to work closely with their shipping industry counterparts, demonstrating the benefits of viewing elements of maritime power as “all of one company.” The downside to the achievements of this successful model was that it was possibly too short-lived for the valuable lessons to be fully inculcated and applied more broadly.

As we move further into what is being called the maritime century, it is inevitable that interaction between navies and the shipping industry will become more common, whether it be through state-on-state friction, piracy and armed robbery at sea, maritime terrorism, or mass maritime migration. It is therefore important that both naval officers and the shipping industry better understand each other. Both organizations should include within their respective trainings new educational periods and liaison visits to understand their maritime counterparts. This closer relationship would engender a far greater understanding and appreciation of each other’s ethos, outlook, concerns, and fears. A closer relationship created over time will build trust, and hopefully induce the conditions for naval forces and the commercial shipping industry to become “all of one company.”

Peter Cook is a former Royal Marines Officer and spent a significant part of his 24-year career involved in different aspects of maritime security, including from maritime counterterrorism to formulating counterpiracy policy and procedures for the UK Ministry of Defence. In 2011 he developed the concept and was the co-founding CEO of the Security Association for the Maritime Industry (SAMI), the representative body for the global private maritime security industry. SAMI was at the epicentre of defining international and commercial standards for private armed guards onboard commercial ships in the fight against Somali piracy. In 2016, he was co-founder of PCA Maritime, a maritime security consultancy, which serves UNODC, major shipping associations, flag States, and marine insurers. Having attained a MSc in Maritime Operations and Management at City, University of London in 2018, he is a visiting lecturer to several universities internationally on the evolving discipline of maritime security. He is an Associate of the Corbett Centre for Maritime Policy Studies, King’s College London and Honorary Fellow at the Australian National Centre for Ocean Resources and Security (ANCORS) University of Wollongong. Peter is also the Managing Editor of the International Journal of Maritime Crime and Security (www.ijmcs.co.uk).

[1] Seapower A Guide for the twenty-first century TILL p416

[3] The Sea and Civilization PAINE p5

[6] Over the past four decades more than 50,000 natural compounds have been reported from marine-derived organisms that could support the production of a range of chemicals, foods and antibiotics, many previously unknown.

One thought on “All of One Company: The Need to Forge a Stronger Bond Between Navies and Commercial Shipping”