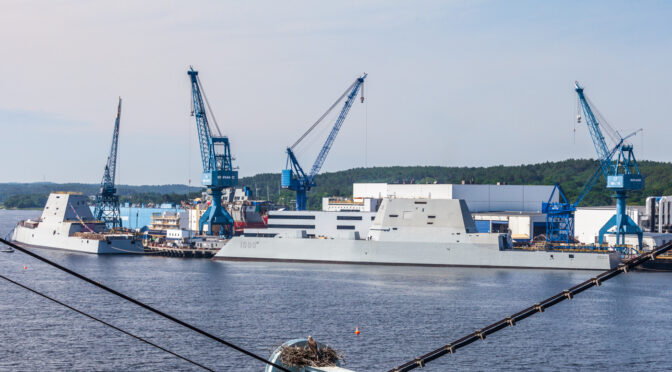 Predictions of impending climate catastrophe have prompted policymakers across the world to declare a climate emergency and advocate to enact sweeping reforms to energy, transportation, and infrastructure. Without immediate action to rapidly and dramatically overhaul the energy system to eliminate the use of fossil fuels, these predictions envisage worldwide crises of food and water insecurity, habitability, extreme weather, and other shocks to civilization which would make the planet less habitable. Based upon these predictions, many Western governments have made avoiding this crisis priority number one for government policy, and most importantly, are allocating resources to meet the challenge.

However, the security-related risks of the United States pursuing decarbonization merit further scrutiny, especially with respect to decarbonization’s impact on the shipbuilding industrial base and its ability to contribute in a protracted great power conflict. Examples abound of the American decline in relative industrial strength and that of western nations generally. But unique to this point in time are the defense risks brought on by the proposed path to decarbonization and its likelihood to accelerate these trends.

A nation’s ability to wage a large-scale, prolonged, multi-theater, conventional war is heavily predicated on its industrial capacity. Planning must assume that losses of ships, aircraft, and equipment will occur and must be replaced in an operationally relevant timeframe. In such a protracted conflict, the order of battle at the commencement of hostilities is less critical than the nation’s industrial capability to repair and replace damaged and destroyed assets over time. With this as a foundational assumption, adversaries will assess their ability to fight and succeed in a prolonged conflict in part by comparing their relative strength in industrial capacity and the integrity of their supply chains for critical resources. There are a multitude of political scenarios in which a large-scale war could develop, some of which, it must be assumed, include situations where the U.S. would be forced to fight without significant material assistance from major allies and relying primarily on its own industrial strength to sustain engaged forces.

A decline in shipbuilding capacity is a clear and troubling trend, especially for those working in the U.S. maritime industry, and it is critical to assess the challenges this decline creates for the country’s ability to wage a protracted maritime war. It may not be possible in a crisis situation to execute a rapid ramp-up of shipbuilding capacity to support military operations.

Planned decarbonization could put this possibility out of reach, because industries relying on traditional fossil fuel sources will feature greater reliability and output compared to industries undergoing an uneven transition toward more novel renewable energy sources. Substantial increases in subsidies for grid-scale wind and solar generation demonstrates a reliance on the large-scale deployment of these sources to push the decarbonization of the electrical power sector. The intermittent nature of these sources, with capacity factors for wind and solar at 33 percent and 22 percent respectively, and the large proportion of subsidies that make up the investment costs, makes the levelized cost of energy (LCOE) very difficult to compare directly with fossil fuel power plants. But the economic impacts can be seen as countries adopt a greater proportion of renewable energy.

Great Britain, Germany, Australia, Canada, and the United States have all seen substantial electrical power cost increases over the last 20 years, even while the cost of fossil fuels—still the dominant source of electrical power generation—has decreased over the same period.3 There are still lively debates to be had regarding the advancement of other technologies which would both reduce carbon and increase reliability, such as nuclear power. However, judging only by the current state of the electrical power industry, it is difficult to imagine the requisite investment and regulatory approvals that would have to be completed in time to make these technologies feasible as wholesale replacements for the existing infrastructure of fossil fuel sources. The outlook for dramatic cost reductions relative to fossil fuels is not promising.

This demonstrates the true costs of intermittent renewable energy, even at current levels of consumption, and demand is only set to rise even further with an equally massive effort to electrify transportation. The effects on the market of increased demand coupled with increasingly unpredictable generation will become apparent in the rising cost of long-term power contracts, the instrument most large industrial customers rely on for their electrical power.

These large-scale economic influences will further solidify declining U.S. competitiveness in energy-intensive industries like shipbuilding, or at least until significant technological innovation can make renewable energy as effective as the sources it is replacing. A subsequent and related decline in investment and available capital assets (heavy equipment) will make rapid re-tooling in the event of a national defense emergency much less likely to be successful.

The strategic implications cannot be assumed to have been lost on great power rivals. The push for rapid decarbonization in the west could likely be used as a weapon by revisionist authoritarian powers, China specifically, to gain advantage in terms of access to cheap energy sources and control over technology critical to meet aggressive decarbonization goals. China has very publicly supported international agreements to fight climate change, but has committed to decarbonization at a much slower pace than most western nations under the premise of fighting poverty internally as a developing nation. However, little real policy progress toward decarbonization within China appears to be underway, with more new coal-fired capacity under development than the entire coal power capacity of the United States.4

Simultaneously, greater development in electric vehicles and alternative energy manufacturing sets China up as the leading recipient of sizeable capital inflows from the west’s drive for decarbonization. This justifies domestically the massive subsidies granted to these sectors of the economy by the Chinese government. These alternative energy investments are already being paid back strategically, if not financially, with export controls and consolidation of the rare earth minerals industry already causing supply chain concerns for U.S. defense industries. Battery raw materials are another example of Chinese control over the decarbonized future proposed by western policymakers, with 80 percent of the supply chain of advanced battery raw materials such as lithium, cobalt, manganese, and graphite controlled by Chinese companies, despite having relatively low natural reserves in mainland China.5

Beijing has made no secret of its intent to address its domestic energy insecurity, and has recently made a point of aggressively asserting its right to develop hydrocarbon deposits in the South China Sea (SCS).6 Along with the obvious implications of this policy for regional security in East Asia, it also reveals a broader policy of development of the most cost-effective forms of energy in support of the priority to maintain the high pace of economic development that it has been able to enjoy for the past few decades. Crude oil, natural gas production, and refining capacity continue to increase in China, while demand further outstrips supply.7 U.S. refining capacity, while still the largest in the world, has seen negligible growth during the same period. Similarly, energy-intensive raw materials production, such as the steel industry, is dominated by China and continues to grow—with 53.3 percent global market share worldwide.8

For the current Chinese administration, home-grown technology development has become a priority, with the end goal of dominating not only heavy industries and raw materials, but also the means to fully utilize industrial capacity for domestic consumption without having to rely on export-driven growth. These policy goals serve to maintain China’s industrial competitive advantage while also ensuring that innovation grows together with production capacity, meaning that in the event of a security-related crisis, little economic retaliation would be effective for any adversary to exploit, and latent capacity for the buildup and reinforcement of industrially-intensive assets such as warships and other military resources will be readily available. Internal logistical resources, such as rail connections, smaller ships for short-distance coastal shipping, and their necessary support networks will also be much more readily available to a national economy based on industrial production, especially one heavily reliant on traditional fossil fuel energy sources, than one based on services or more novel alternative energy sources.

The Chinese military build-up, culminating most recently with the achievement of fielding the largest navy in the world by number of ships, has been well-documented. What is less appreciated is the significant maritime and industrial infrastructure China has invested in to build such a navy, and in a remarkably short period of time. The advantage gained by the simple number of ships may be dubious in certain respects, but the industrial advantages China’s expansive maritime industrial capacity could offer in a prolonged, large-scale conflict cannot be understated.

Prioritizing a policy of decarbonization over all else, when available resources and technological innovation does not support a smooth transition as evidenced by market data, tips the balance of power in certain respects toward nations willing to pursue domestic growth and increased industrial capacity regardless of the undergirding fuel sources. Perhaps this is a risk the western world should be willing to take, given the clear and dire predictions of the costs of inaction on climate change. But there may be a middle-road policy to balance aggressive decarbonization goals against national security risks, and those risks must be better understood and appreciated by military professionals and policymakers alike. Such an understanding can only begin to be achieved with a more realistic evaluation of the dual challenges faced by western democracies as they simultaneously attempt to rapidly decarbonize their economies while still maintaining the established international order.

Benjamin Clark is a contract electrical engineer for the U.S. Coast Guard, and a five-year U.S. Navy veteran. He earned his Master’s in Electrical Engineering from University of California, Riverside with a specialty in power systems and electrical power markets, and is a 2012 graduate of the U.S. Naval Academy. His views are his own and do not necessarily represent the official views of his employer or the government departments he is associated with. He can be contacted at clarkbenjamin71@gmail.com.