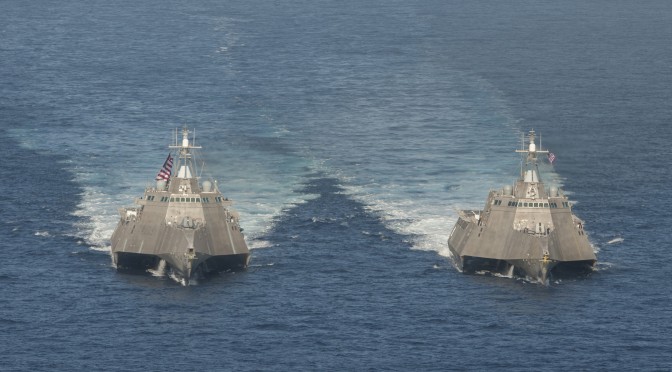 The Littoral Combat Ship (LCS) is the ideal platform to host a significant amount of offensive firepower in support of the emerging concept of distributive lethality. It is large enough have greater endurance and to support capabilities beyond that of the average missile combatant. Its modular approach to embarked capabilities allows for more potential offensive systems to be employed aboard than in similar ships. Deployed as a dispersed flotilla of networked combatants with other organic means of communication, it has the potential to deliver significant amounts of ordnance against a variety of targets. The dispersal of the LCS flotilla complicates and dissipates enemy counter-targeting abilities. LCS is the ideal combatant to carry forward the concept of distributed lethality into the next decade.

As described by Deputy Defense Secretary Bob Work in his 2013 history of the LCS program, the ship was always designed as a compromise between smaller, but less capable and globally deployable small combatants, and the larger, and more capable, but more expensive FFG-7 class frigate.1 Compared to smaller designs such as the Ambassador III or dedicated surface warfare corvettes like the Israeli Sa ar V, the LCS’ size and modularity offers advantages above those conventional small combatants. LCS’ has greater endurance then smaller missile combatants like the Ambassador (21 days verses 8) which enables it to remain at sea longer in support of surface warfare missions. The Saar V is more heavily armed then the baseline LCS seaframe, but supports only one rotary wing asset, and lacks the modularity to accommodate future sensors, weapons, and associated systems.
Both LCS seaframes, in contrast support two rotary wing assets (one MH-60R and one Firescout Unmanned Air Vehicle). The MH-60R in particular supports anti-surface and anti-submarine warfare missions, as well as extending the host ship’s sensors, weapons and communications capability far beyond those of a conventional missile combatant like the Ambassador.
The modularity of LCS also supports the embarkation of a more diverse set of capabilities than those hosted by mission-specific platforms like the Ambassador and the Saar V. An LCS might support a number of unmanned surface or subsurface vehicles separate from its Fire Scout UAV. Mines, additional munitions, and additional command and control equipment could also be supported depending on the desired mission. As the Spruance class destroyers later hosted Tomahawk cruise missiles, LCS’ modularity could support an array of heretofore undetermined systems and new capabilities in the future.

Although not presently suited to the Distributive Lethality mission, the LCS could be modified into a potent surface warfare platform with the addition of cruise missiles such as the Kongsburg/Ratheyon Naval Strike Missile. Both LCS producers (Lockheed Martin Corporation and Austal USA) have also said their respective ships could be outfitted with larger 76mm guns in place of the present 57mm weapons. While cruise missiles are a requirement for the Distributive Lethality mission, further weapons, sensors, armor and armament add little to that mission capability and increase costs which the Navy estimated to be from $60 to $75 million dollars per ship.2 This money might be better spent in additional LCS platforms as the original aim of the LCS program was to increase the size of the U.S. surface combatant fleet.
Application of additional weight for armor and warfare capabilities not related to Distributed Lethality limits the opportunity for mission package improvements in the future and could limit the number of offensive weapons the LCS can support in its current length and displacement. As reported by the GAO, LCS already has relatively tight weight ratios for further additions to the sea frames outside mission module improvements.3 Every warship is a compromise of virtues, where armament, fuel capacity, speed, survivability and other factors must be carefully balanced to achieve desired operational goals for the class. An appropriate balancing of such issues for LCS should be in favor of offensive capability to avoid the need for a costly redesign of the sea frame to support significant additions. The cost of the LCS sea frame has steadily decreased from nearly $700 million to approximately $440 million.4 Three can now be built for the cost of one DDG. This is not the time to increase the cost by redesigning the ship to fit an expanded armament. Such a process defeats the concept for making the LCS the “low” component of a new high/low mix of surface combatants.

A squadron of LCS employed as part of a Distributive Lethality scheme will rely on their dispersed deployment pattern to reduce susceptibility to opponent targeting. The ships’ high speed, although often derided by critics is also a useful means of escaping enemy detection. An LCS capable of 40 knots can move away from a missile launch point faster than other U.S. combatants and potentially increase the area of uncertainty an opponent must consider in launching weapons down a return bearing.
An enemy would be forced to weigh significant risks in confronting such a force. An opponent might detect and attempt to eliminate one element of a distributive LCS force, but the remaining units might launch a devastating counter-salvo against therm. Such a response could cause significant harm to an unprepared, massed adversary force.
A basic LCS sea frame equipped with a moderate surface to surface missile capability could be a potent addition to the distributive lethality concept. Using means from fleet-wide networks to bring your own networks (BYON’s) created by groups of ships, a distributed LCS squadron operating as an anti-surface warfare (ASUW) formation could be a significant threat to opponent surface formations. The LCS’ larger size and rotary wing capabilities allow them to spend more time at sea, and see further beyond their own sensor horizon than smaller, dedicated missile combatants. LCS’s modularity allows the ships to bring additional weapons and capabilities to the fight beyond those of even heavily-armed corvettes and light frigates. These advantages suggest that LCS squadrons should be in the vanguard of the future distributed fleet.