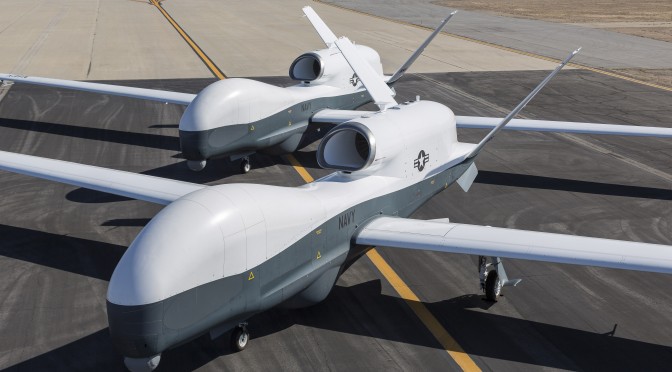 The Navy’s surface warfare community is committed to remedying its lack of anti-surface warfare (ASuW) punch with the concept of Distributed Lethality. “If it floats, it fights,” is the rallying cry.[1] Dispersed forces operating together pose challenges for an adversary, but also create targeting difficulties we must solve.

The detection range of shipboard sensors is limited by their height above the waterline and the curvature of the earth. Since it appears doubtful leaders would call on a ship to steam into visual range of adversaries, airborne assets are most likely to provide over the horizon (OTH) targeting.

In a January 2015 article in Proceedings, Vice Admiral Rowden, Rear Admiral Gumataotao, and Rear Admiral Fanta reference “persistent organic” air assets as key enablers of Distributed Lethality.[2] While a completely organic targeting solution offers opportunities in some scenarios, it has limits in high-end contingencies. In empowering the surface force, let us not ignore inorganic air assets. Distributed Lethality is far more effective with them.

During a January 2015 test, a Tomahawk Block IV test missile received in-flight updates from an aircraft and impacted its target, a mock cargo ship near the Channel Islands of California.[3] “This is potentially a game changing capability for not a lot of cost,” said Deputy Secretary of defense Bob Work. “It’s a 1000 mile anti-ship cruise missile.”[4]

But this test did not solve the fleet’s ASuW problem. Nor was it the first time the service had used Tomahawk in an anti-shipping role. To understand the difficulty of OTH targeting, we have to examine the final days of the Cold War.

In the late 1980’s, various ships and submarines carried the radar guided Tomahawk Anti-Ship Missile, or TASM. The TASM boasted a range of over 200 nm. But because TASM was subsonic, it took as long as 30 minutes to reach its target. In this time, a fast warship could steam as far as 15 miles from its initial location. Additionally, neutral shipping could inadvertently become the target of the seeker if the enemy vessel was not the closest to the missile when the radar activated.

Therefore, TASM could only reliably be used when there was no neutral shipping around, or in a massive conflict where collateral damage considerations were minimal. The Navy sought to remedy this by developing OTH targeting systems known as Outlaw Hunter and Outlaw Viking on the P-3 and S-3 aircraft. But with the demise of the Soviet Union, massive defense cuts and the evaporation of any blue water surface threat led to the retirement of TASM.

OTH targeting is not a new problem. To solve it, airborne platforms are critical. Let’s examine the organic and inorganic assets that can fill these roles. We will then discuss how inorganic assets offer the most promise.

The surface force is equipped with rotary and fixed wing assets to enable OTH targeting. From a sensors standpoint, the MH-60R is most capable. Its inverse synthetic aperture radar (ISAR) can identify ships from long range, but it is limited in altitude and radar horizon. MQ-8 UAV’s offer increased endurance over manned assets. Their maximum altitudes are higher, but still constrain sensor range. The RQ-21 fixed wing UAV rounds out this group. It has solid endurance, but very limited speed.

The limited speed and altitude capabilities of these aircraft mean that the area they can search is small. Also, they must operate well within the weapons engagement zone of their targets to identify their prey. If these sensors platforms are radiating, a capable adversary will hunt them down or lure them into missile traps and destroy them in an effort to deny our forces a clear targeting picture.

While not organic to a surface action group, fixed wing aircraft bring speed, altitude, and persistence to the fight. P-8 and P-3 patrol aircraft offer standoff targeting and C5I capabilities. So too do the MQ-4 UAV and the E-8 JSTARS aircraft.

The carrier air wing brings blended detection and OTH targeting capabilities. The E-2 lacks ISAR identification capability, but does boast a passive electronic warfare (EW) suite and the ability to coordinate with the powerful EW system onboard EA-18G aircraft.  Additionally, the latest E-2 model can pass targeting quality data to surface ships to allow them to engage from the aircraft’s track, significantly increasing the ship’s effective missile envelope.

These platforms are expensive and limited in number, but their altitude capability and resulting sensor range allows them to standoff further from the enemy, radiating at will. Additionally, their high dash speed allows them to better escape targeting by enemy fighter aircraft. Their speed, persistence, sensor coverage, and survivability make them logical targeting platforms. They are far more capable and enable better effects than shipboard rotary assets and UAV’s.

The ultimate platform to provide targeting updates to long-range ASCM’s would be a stealthy UAV similar to the RQ-170.[5] Such an aircraft could receive cueing from other platforms, an onboard EW suite, or its own low probability of intercept (LPI) radar.[6] Able to stand in, it could provide visual identification, satisfying rules of engagement. It could provide target updates via a LPI datalink to inbound weapons. These technologies have their roots in the “Assault Breaker” initiative that led to the creation of the Tacit Blue test aircraft and the rise of modern stealth technology.[7],[8] Similar radars, datalinks, and low observable platforms have been proven and are flying today in various forms.[9]

Cost of a new platform is high, but their ability to get close and persist while unobserved is very useful and provides high confidence visual identification to commanders. Their survivability removes the need to provide airborne early warning (AEW) and high value airborne asset protection. Their stealth frees AEW aircraft and fighters to focus their energies elsewhere.

The concept of Distributed Lethality offers promise, but will be limited if its scope is confined to only utilizing capabilities resident in the surface fleet. It is best to pursue organic capabilities while also integrating inorganic assets when planning how the fleet will fight the conflicts of tomorrow. Let us pursue solutions that incorporate forces from many communities to best meet future warfare challenges.

Lieutenant Glynn is a Naval Aviator and a graduate of the University of Pennsylvania. He most recently served as a P-8 instructor pilot and mission commander with Patrol Squadron (VP) 16. He currently flies the T-45 with Training Squadron (VT) 21. He is a member of the CNO’s Rapid Innovation Cell. The views expressed in this article are entirely his own.

[7] Robert Tomes, “The Cold War Offset Strategy: Assault Breaker and the Beginning of the RSTA Revolution,” War on the Rocks, November 20, 2014, http://warontherocks.com/2014/11/the-cold-war-offset-strategy-assault-breaker-and-the-beginning-of-the-rsta-revolution/.