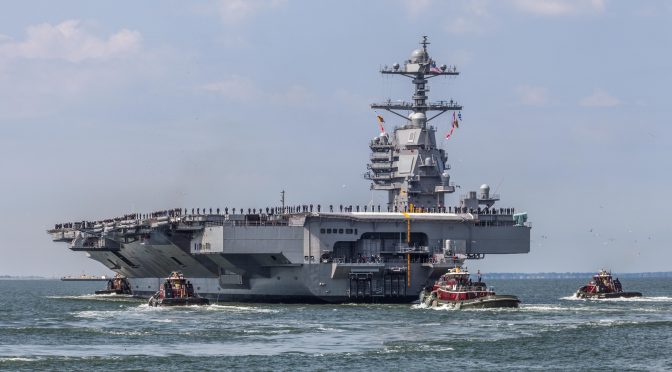 In its final report to the CNO in July 2016, the Strategic Studies Group 35 concluded that that the “Navy’s next capital ship will not be a ship. It will be the Network of Humans and Machines, the Navy’s new center of gravity, embodying a superior source of combat power.”

The U.S. Naval War College’s Institute for Future Warfare Studies is partnering with CIMSEC to solicit articles putting forth concepts for the U.S. Navy’s capital ship of the future and its potential complement of unmanned and manned systems.

The Institute’s mission is as follows:

“The mission of the Institute for Future Warfare Studies (IFWS) is to serve as the focal point for the U. S. Naval War College (NWC) actions to support identifying and defining the future warfare trends, and associated roles and missions for the future Navy. The IFWS will contribute to the analysis by thinking about future warfare and the potential impact on the naval services.”

Within the DC Beltway in the past year or so, most of the conversation surrounding the size of the U.S. Navy was focused on the “number of ships” or “ship goal.” The Navy formally started the discussion with its 2016 Navy Force Structure Assessment establishing the need for 355 ships compared to the official requirement of 308 ships set in 2014. MITRE Corporation concluded that the Navy needed 414 ships while CSBA set their number at 340 ships. In attempting to project the force of the Navy for 2030-2045 and beyond, all of these studies have made a critical, and unproven, assumption that the aircraft carrier remains the capital ship in the future supported by large, multi-mission surface ships and submarines. By making this assumption, the studies further assume that the combat potential and combat power of the USN is and will continue to be measured by the size and number its capital ships.As long as the Navy conceptualizes and communicates fleet combat power solely in terms of warship inventory – manned ships and submarines – the basis for Navy capabilities and future fleet force structure will not change and continue to be built upon a logic that, while important for many reasons, is also increasingly anachronistic. Furthermore, this fixation on ship inventory is not reflective of the afloat combat power that adversaries have and will deploy in the not-too-distant future as unmanned systems and automation proliferate. The result will be a comparative, and potentially dangerous, mismatch in capabilities and combat power between the USN and potential adversaries.Counting hull numbers today is comparable to using numbers of guns, numbers of sailors, or gross tonnage displaced all from the past. In the 1800s, the Royal Navy’s rating of their ships was based on the number of guns and number of sailors onboard. In the early 1900s, the U.S. Navy’s rating system was based on gross displacement. Assuming a modern warship that displaces 10,000 tons delivers five times the combat power of a hull displacing only 2,000 tons is no longer valid. Guns, sailors, gross displacement, and numbers of hulls served the navies of their time well. But this obviously no longer holds true.Combat power in future navies will not merely be a function of the size of the ship. Technological and operational advancements have changed the calculus. Properly designed, outfitted and operated, today’s smaller ships can carry and deploy weaponized unmanned vehicles, capable of combat under, on, and above the sea. The imperative for modernizing naval power emerges when combat power is severed from the hull with unmanned systems.Consider one example: a nuclear-powered aircraft carrier, the U.S. Navy’s principal capital ship since the 1940s, has no appreciable inherent combat power despite displacing approximately 100,000 tons. Its significant combat power emerges from the embarked air wing. The air wing’s combat power leaves the hull for the fight for sea control or projecting power ashore.Yesterday’s “unmanned future,” coming for a decade or longer, has already arrived. Any discussion of future Navy force structure must explicitly and substantively address unmanned systems in a force where 25 percent to 50 percent of the combat power and 50 percent to 75 percent of surveillance capabilities could potentially reside in unmanned systems. Additionally, today’s discussion of Navy force structure must also explicitly and substantively address the network of humans and machines that enable the capabilities of these unmanned systems. Without unmanned systems and their associated network of humans and machines, the U.S. Navy could well fall short against many adversaries, most of whom could have smaller fleets than even planned for in USN force structure documents, but may punch well above their weight and in ways that contemporary ship-counting paradigms do not see coming.While programmatic, fiscal, and bureaucratic pressures may demand such measures of naval power, it fails to provide a non-linear vision; one of “families” of modular unmanned systems – micro, small, medium, large and extra-large; air, ground, surface, sub-surface, and seabed – all disconnecting combat power from the ships and with the capability to disaggregate and re-aggregate capabilities to meet warfighting needs. Such potential could allow a future fleet to have reach and effect well beyond the numbers of ships and hulls that are used to describe the fleet of today.

This Topic Week has since concluded and submissions may be viewed here.

Professor William G. Glenney IV is a part of the Institute for Future Warfare Studies at the U.S. Naval War College.

The views presented here are personal and do not reflect official positions of the Naval War College, DON, or DOD.