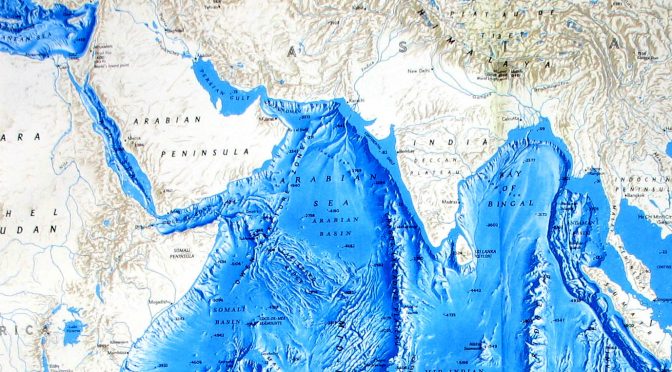 The visit of United States (US) Secretary of Defence Ashton Carter to India has provided grounds for once again debating the facts and history of bilateral relations between these two countries and the implications on relations with China and the emerging world order. The convergence between the two parties to sign the Logistics Exchange Memorandum of Agreement (LEMOA) in the near future was the primary instrument of play in this debate. This visit has broader maritime relevance amid similar developments this month emphasizing India’s vision and attitude towards the Indian Ocean.

Sustaining present or higher growth trends for the coming three decades is the central economic strategy of New Delhi if India were to become an economic superpower. Maritime trade and connectivity is perhaps the critical enabler of this strategy, as it was historically when the subcontinent maintained one of the highest GDPs in the world. Enumerating this, India organised the first Maritime India Summit in Mumbai recently which featured about 240 projects with investment potential of $66 billion in the next five years.

The National Perspective Plan for Sagaramala programme, a model of port-led development, has also been released. The Indian ports are undergoing modernisation along with their feeder transportation links – road, rail and inland waterways. These corridors will enable seamless transportation of goods and services from Indian hinterlands to overseas destinations.

India, Iran, and Afghanistan finalised the text for agreement on developing the port of Chabahar this month. This gateway port will boost regional trade and connectivity, and will allow India to secure access to Afghanistan where it is setting up basic infrastructure and shares Kabul’s security concerns.

On the other hand, the development of the Gwadar port by China in Pakistan has raised objections from the local people of Balochistan. India is concerned about the setting up of transportation links in the sensitive Pakistan occupied Kashmir (PoK) to China, who is worried about the safety of its workers. The probability of Gwadar functioning as a naval base, forming a node in China’s String of Pearls, has negative implications to regional stability.

In a separate development, the Maldivian President declared on his visit to India an ‘India first’ foreign policy in an attempt to revive the souring relationship caused by internal political turmoil as well as the passing of a controversial law that would grant China rights to land reclamation.

In Sri Lanka, the Colombo Port City Project has now morphed into a financial, business, and logistics hub welcoming large scale Indian investments. The ratio of investments from Sri Lanka and China were clarified and the entities that will be in charge of operations were named. Clarifications on this project were aimed at addressing India’s security concerns due to increased presence of China’s economic and naval assets in the country and aimed to welcome India as a partner in the project.

The primary concern about China’s projects in the Indian Ocean under the Maritime Silk Road initiative is the possibility for turning these ports into strategic assets countering India’s natural advantages in the region. China could increase its naval presence in the Indian Ocean while citing protection of investments, anti-piracy operations, and humanitarian assistance to its citizens while rejecting international cooperation.

China’s provocative actions in the South China Sea disregarding international norms and calls for peaceful settlement of boundary disputes go against India’s quest for maintaining the status quo and consenting to international adjudications on maritime boundary disputes, such as those peacefully resolved with Bangladesh. China continues to disregard India’s sensitivities with respect to Pakistan and PoK. It has yet to settle land border disputes with India despite concluding similar agreements with 12 other neighboring countries.

The Indian Navy (IN), the principal guarantor of India’s maritime security, has encountered threatening postures from China’s warships. Two Chinese destroyers and an anti-submarine helicopter allegedly forced an Indian submarine to surface near Somalia. There were 22 “contacts” with Chinese submarines in the Indian Ocean through 2013, according to data provided by the US military.

In 2011, a Chinese fishing trawler was intercepted and pushed into international waters by the IN when it tried to monitor telemetry signals off Balasore, India’s missile testing range. India is also deeply aware of China’s unprofessional treatment of INS Airavat as it trasited the South China Sea (SCS) near Vietnam. China’s declarations like the “Indian Ocean is not India’s Ocean” certainly do not help build a positive environment.

These developments are factored into India’s decision to build a blue water navy with the Indian Ocean designated as its primary area of responsibility. Indian and American interests converge on protecting sea lines of communication in the Indian Ocean and upholding peace and stability in its littoral while adhering to international norms. As the US is in need of such a partner like India, India needs technological assistance that the US can provide for building an advanced network-centric navy capable of executing these objectives.

A maritime security dialogue will be initiated between the two countries. Regular discussions will be held on submarine safety and anti-submarine warfare techniques. India could acquire the Electromagnetic Aircraft Launch System (EMALS) from the US in ongoing discussions on aircraft carrier technology transfers. EMALS can launch a variety of manned and unmanned aircraft far more efficiently than the catapult system. India and the US will also exchange data on commercial shipping.

The LEMOA will simplify replenishment requests by either military at one another’s bases. It would help the American and Indian navies to respond swiftly to non-traditional threats like piracy and terrorism on high seas; humanitarian assistance and disaster relief operations across the Indian Ocean, especially West Asia; and enhance compatibility of personnel and systems. India’s concerns will be taken into consideration to include provisions that deny supply of armament as well as absolve it from supporting US military operations against friendly countries.

This multi-vectored maritime relationship aims to enhance India’s capacity for fulfilling its role as the net security provider in the Indian Ocean. This is the primary objective and therefore the rebuttal to considering joint patrols with the US in the SCS. India will assume its responsibility for upholding wider regional peace and stability after a careful assessment of its political priorities and relevant capacity commensurate with the dynamics of an emerging multipolar Asia within a multipolar world order.