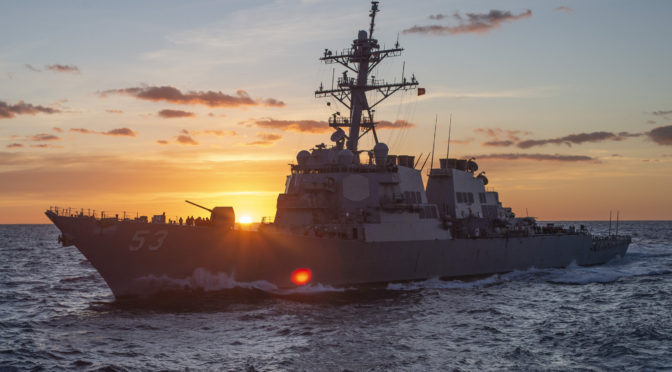 China is modernizing every element of its military. It has announced plans to field a world-class military by 2035 and a dominant military by mid-century.1 Consistent with its goal of regional hegemony, China is building Navy, Coast Guard, and merchant ships faster than any other nation. Its Navy now directly commands China’s Coast Guard, adding hundreds of ships to its fleet. China’s fleet of warships now outnumbers U.S. warships in the Indo-Pacific by about 10 to 1. With this new capability, China constantly intimidates its neighbors through its increasingly aggressive maritime behavior.2

China intends to control the international waters off its shores.3 It has invested heavily in long-range anti-access area denial (A2/AD) missiles. These missiles represent a serious threat to warships, since considerable uncertainty exists about the effectiveness of the defenses against them.4 A strategic benefit of robust A2/AD missiles is increasing the stand-off distance from China that warships must maintain to avoid attack. By pushing navies further away from shores, these weapons look to turn the China Seas into Chinese territorial waters. According to the Commander of U.S. Indo-Pacific Command, Admiral Phil Davidson, “China is now capable of controlling the South China Sea in all scenarios short of war with the United States.”5

China, ignoring the UN ruling,9 continues to militarize the area. Chinese aircraft and ships continue to harass many ships and aircraft of other countries venturing near.10 China has now largely gained the ability to manage and interfere with the commerce passing through the South China Sea if it so chooses. The U.S. and other countries continue to conduct Freedom of Navigation Operations (FONOPS) near these features and through the Taiwan Strait, but China vigorously protests these FONOPS and orders U.S. or allied ships out of its “sovereign waters.” After a recent FONOP near the Paracels, the Chinese government boldly issued the following statement, “We again stress that China has irrefutable sovereignty over the islands of the South China Sea and their nearby waters.”11

In order to counter this emergent capability and China’s increasing aggression, deploying a much larger number of warships to the region is urgent.

The U.S. Navy and China’s Threat

Alfred Thayer Mahan’s The Influence of Sea Power on History12 was a seminal military planning and strategy framework that shaped maritime defense and international trade policy in the 19th and 20th centuries. Mahan’s theories concerning the extraordinary importance of sea power to defend national sovereignty and economy still apply today.13 Given how 71 percent of the Earth’s surface is ocean, having a powerful Navy is essential for protecting vital commerce, defending coastlines, and defeating almost any enemy. Throughout American history, time and time again, the use of the U. S. Navy at critical junctures has been the key to its defense and the implementation of national policy. Whether it was fighting the Barbary Pirates, sending the Great White Fleet around the world, the Battle of the Atlantic during WWII, the invasion of Normandy with thousands of ships, or turning the Japanese back at Midway, the U.S. Navy has always played a vital role in war and peace. It must do so again in the Indo-Pacific by resisting China’s goals.

With an adequately sized fleet, the Navy’s ability to control the sea using nuclear-powered carriers with embarked air wings, sophisticated attack and guided missile submarines, Aegis cruisers and destroyers, coupled with unparalleled forward logistics support, would be unmatched. Virtually no one contemplates a land war with China, making the Army’s role in containing China in the Indo-Pacific somewhat limited. The Air Force can project power in Asia but its capability is much more limited than the Navy’s given its dependence on a finite number of fixed launch points and an extremely long logistics tail. With the vastness of the Indo-Pacific area of responsibility, much of it covered by oceans, only the Navy can be effective at countering China’s influences in place and prevent China from becoming a regional hegemon.

But despite the importance of having a robust Navy of sufficient size and capability to defend U.S. national interests, it is acknowledged by most defense experts that the Navy is no longer large enough to ensure freedom of navigation and to limit China’s aggressive behavior in international waters. The Navy’s technical superiority will make a difference only if there are enough ships in the right places. If the U.S. does not retain supremacy in the Indo-Pacific, China will inevitably step in to fill the vacuum.

The current administration and Congress have recognized the need for 355 ships,14 but the Navy currently has only 295 warships in commission,15 and a recent Congressional Research Service report on shipbuilding estimates that with current budget profiles the only way the Navy will reach the goal of 355 is by extending the life of existing ships to 40 and 45 years for various ship types and with increasing maintenance costs.16 With the increasing threat from China and others, the requirement is most likely much higher. The Heritage Foundation documented a need for 400 warships.17 With the inadequately sized force and with approximately one third of the current fleet already deployed at any one time, it is hardly surprising that the Navy cannot effectively keep up with China’s actions in the vital Indo-Pacific. The Navy is already so over-tasked in Asia that many ships have been forced to neglect basic navigation training and overwork it sailors with 100+ hour workweeks, resulting in multiple tragic accidents costing many lives.18

In any conflict, the best strategy would be to project power away from the U.S. and toward the adversary. But China is a long ways away as it takes weeks to traverse the 6000-plus miles from the West Coast to China. The Navy must already have a significant proportion of the fleet in place when needed. Only the Navy can loiter indefinitely near China, supported by the most capable logistics systems. Only the Navy’s power projection assets can freely exercise the American sovereign will for the U.S. and its allies, even to blockade China if necessary. The need is urgent not only for more warships, but also for more advanced warships like the Ford-class CVN and the next generation of attack and ballistic missile submarines and surface combatants that can challenge China’s A2/AD weaponry.

However, modern warships are tremendously complicated and take a lengthy time to build. The newest U.S. carrier, the USS Gerald Ford (CVN-78), took 12 years to build. It was commissioned in July 2017, but is still not certified for combat.19 Other ship classes take less time to build, but none less than 6 years. Because it takes so long to construct warships, the next war will almost certainly be fought with the ships already on hand today, unlike in WWII where the industrial base was a decisive factor. But since the fall of the Soviet Union, the U.S. shipbuilding industry has experienced a tremendous decline. Today there are only seven shipyards in the U.S. capable of building Navy warships.20 The complex nature of Navy combatants requires the retention of a robust, state-of-the-art shipbuilding industry that is capable of building the world’s most advanced warships. According to the Congressional Research Service, the industry has unparalleled capability but limited capacity as it can only build a handful of ships at a time and would have to add considerable numbers to the workforce and make major plant investments before being able to build more ships faster.21 But it is urgent to build more ships now while there is still time.

While the average U.S. citizen is not aware of the dire threat that China represents, that is not the case for Navy stakeholders and supporters. The U. S. Naval Institute, the Navy League of the United States, the Association of the United States Navy, the Center for International Maritime Security, key Congressional leaders, shipbuilders, and defense think tanks are all too aware of China’s rise and the extreme risks that will dawn in the coming years. These stakeholders wield considerable influence in how the nation plots its maritime course through troubled waters. What seems to be lacking among them is effective coordination that would lead to a shared vision and unified plan for a response to the China threat, with an emphasis on increasing naval power. These organizations must strive to work together to establish common goals in support of the Navy, and inform citizens about the risks and potential consequences at hand.

Will history give a postmortem of a vanquished America that squandered preeminence because it neglected its own defense? The real question is whether the U.S. can afford not to spend adequately on defense and its Navy. We must urgently build far more warships to defend the nation against China, or else entertain the possibility of a more dangerously uncertain future.

One thought on “Ignorance of China is Not Bliss”