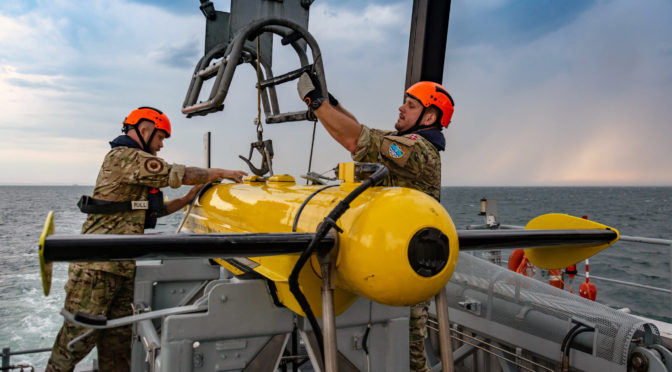 “I would be very surprised if professionals engaged full time in [Mine countermeasures] MCM who speak routinely with other professionals in the same field had no genuine prior knowledge.”–Fred Huffer, Professor of Statistics, Florida State University

Mine countermeasures are actions intended to reduce the risk that mines pose to transiting vessels. Risk is defined as the probability that a transiting vessel will incur mission abort damage from a mine detonation if it travels along a predetermined route through the potentially mined area. The purpose of an MCM operation is to lower the risk so it is safer to transit. The estimation of risk is critically important to determine if the level of risk to a transiting vessel is acceptable and if the applied effort is effectively lowering the risk.

Some of the traditional MCM tactics are founded on Bayesian risk metrics that utilize a non-informative prior distribution for the number of mines. Some statisticians prefer to use non-informative priors because they feel it is more objective. The non-informative prior reduces the amount of required inputs from the tactician so there is less error introduced from the human operator, but it also defeats the entire purpose of using a Bayesian paradigm because the prior distribution does not utilize any information. It assumes that any number of mines is equally likely. In most cases, it is far more likely that there are just a few mines and it is very unlikely there are millions of mines.

Bayesian methods are ideal for the development of MCM risk metrics because they facilitate learning as information is acquired. This is good for MCM because new information and new decisions are frequently acquired throughout the operation. New events often occur which provide critical information and appropriate responses are promptly needed. These events vary greatly in detail. Bayesian analysis centers on utilizing Baye’s theorem to formally combine prior information with newly gathered information. This provides more freedom to create information synergy.

Bayesian calculations utilize a prior distribution to incorporate information about parameters of interest before conducting a trial. In the context of MCM, the total number of mines is an unknown parameter of interest and a search or sweep of the mines is a trial. The choice in prior distribution is less critical when data is plentiful as long as the prior is not too restrictive. When there is an abundance of data, a reasonable prior will have a weaker impact on the final analysis because the posterior distribution will be primarily influenced by the data. However, data is usually limited in MCM operations, so the prior distribution will have a stronger impact on the analysis. In this case, it is critical to scrutinize the choice of prior in order for the risk metric to be meaningful.

Some of the traditional risk models actually use an improper prior for the total number of mines. An improper prior is sometimes used as an uninformative prior with the interpretation that any value is equally likely. However, many statisticians caution against using them since they are known to complicate interpretation and this usually does not provide an appropriate Bayesian update. The improper prior is formed by taking a limit of uniform distributions as the maximum number of possible mines goes to infinity. This does not converge to a probability distribution, so there is no meaningful interpretation of the prior belief for the number of mines.

Having an appropriate Bayesian update is important to MCM because if the result of a single pass of an MCM clearance does not reduce the posterior risk to an acceptable level, then the MCM staff will need to re-plan and execute a second clearance operation in the same area to further reduce the risk. This process will iterate until the risk is lowered to the threshold level.

As Fred Huffer stated, “It would be very surprising if professionals engaged full time in [Mine countermeasures] MCM who speak routinely with other professionals in the same field had no genuine prior knowledge.” If the user cannot reliably provide any information, then a large value for the expected number of mines and a corresponding large variance can be chosen because there is less certainty in that estimate. The user should be able to reliably provide some basic information that can be utilized in the prior belief by answering two simple questions:

The negative binomial distribution is one possible prior distribution that can be used for the mine risk Bayesian framework. Analytical expressions for the required clearance and the risk from remaining mines are easily derived. Not only is the mathematics cleaner and easier to interpret, but it also provides a sensible approach to incorporate prior intelligence information (information known before applying effort) into the analysis.

How does using the negative binomial distribution compare with the popular (uninformative) improper prior? There is no significant difference between calculations derived using the improper prior and using a negative binomial distribution with mean of 10^15 and a variance of 10^30+10^15 as the prior distribution. This default distribution implies that on average we expect there to be one quadrillion mines in the region with an unthinkably enormous variance (one nonillion + one quadrillion) to adequately accommodate our complete uncertainty in the possible number of mines prior to applying effort. To put these numbers into perspective, the surface of the ocean has an area of roughly 360 million square kilometers. That is 3.6×10^14 square meters. If you could place one quadrillion mines over a 360 million square kilometer area, the mines could be spaced on a rectangular grid roughly 0.6 meters meters apart. This setting of the prior goes as far as to say that we think it is reasonably possible that there could more than two quadrillion mines in the region.

If there is genuine concern that the end user cannot do better than this assumption, then after applying mine countermeasures a simple hypothesis test can be done to validate the user selected prior mean and variance against the default. In this way, if the end user significantly mis-specified the prior, then a flag can be automatically raised to warn the commander that the user is unable to translate the prior intelligence information into a reasonable prior belief for this operation. In this case, the command will have significant evidence to reject the assumption that a more reasonable prior belief can be derived by the end user, and return to the default condition. It is important to note that such a flag raise would not imply an outrageous deficiency in judgement by the end user. However, a flag-raise should initiate a discussion of caution toward objectively and consistently arriving at a reasonable prior distribution. Following this protocol should effectively insulate the MCM mission from this type of human error.

The updated theory in this work gently bridges more traditional doctrine into a broader realm of possibilities so that some basic information that has not been utilized can now be incorporated to improve the decision quality for the Navy.

Dr. Michael Rosenthal received his doctorate degree in Mathematical Statistics from the Florida State University in 2014. He received his bachelor’s degree in Mathematics with a minor in Statistics from the University of Florida in 2009. For five years, Dr. Rosenthal has worked at the Naval Surface Warfare Center, Panama City Division, developing basic research topics with academic colleges and assessing warfighter needs for updating and transitioning actionable tactics in the field of mine warfare.

2 thoughts on “The Number of Mines is Less Than Infinity”