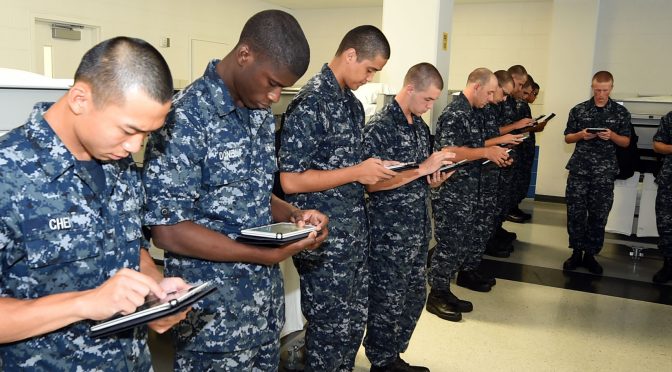 So far this year, we have seen the effective termination of the CNO’s Rapid Innovation Cell (CRIC) and the announced ending of the Strategic Studies Group (SSG). Recently, we have also learned that Navy Warfare Development Command’s (NWDC) popular site “Navy Brightwork” on the joint website MilSuite (which has +500,000 users) will cease to be supported by an official Navy command.

We are more than one year from Secretary of the Navy Ray Mabus’ “Task Force Innovation” announcements at the 2015 Sea-Air-Space conference. Nearly two dozen action memos have led to high-level documents on important topics such as Artificial Intelligence (AI), Robotics, and Big Data. They are an essential reading of the coverage while our service continues to pound away against ISIL at the line of scrimmage.

But sailors and civilians at the deckplate level have seen only a string of perceived losses this year. The concept of the CRIC, SSG, and Brightwork are exactly what our Navy needs. But rather than support, there seems to be a shopping-around for something newer and shinier, or an inability to stand up and fight for the things that will help us win the conflicts of tomorrow.

The end effect for sailors is an innovation and strategic communication shell game that heightens the barrier of entry into naval innovation communities. As soon as our sailors learn of such outstanding innovation communities like CRIC, Brightwork, and SECNAV’s “Hatch,” the pea has passed on, hiding elsewhere. It shouldn’t be a surprise then, when you see the same familiar faces showing up in innovation circles.

More importantly, what will happen to the dozens of junior enlisted and officers who were excited about CRIC, the 1,220 users of Navy Brightwork, and more broadly, the thousands of Navy officers, enlisted, and civilians with both the ideas and the drive to help us fight and win as a service? Are we alienating the very future innovators we seek to enable? Or are we onboarding them into successful communities of practice?

Sailors seem to come in three varieties when it comes to naval innovation:

Not much can be done with the folks in the first category; there will always exist a sizable population seeking to expend the minimum required effort to do their job and go home.

The highest potential for the Navy comes from Categories Two and Three. “The Unknown” sailors are those with great ideas, or a great deal of care, for the service, but who might not know where to pitch and refine their idea, or how to channel their fire.

“The Under-Utilized” sailors are those already active in the remaining innovation spaces, or those left behind by the dissolution of the CRIC and other such organizations. They are those who have pitched at ATHENA Project events, submitted white papers and project proposals, or have been members of various innovation cells and quasi-red teams.

In September 2001, days before the terrorist attacks of 9/11, then-Rear Admiral James Stavridis wrote that we must “[be] open to ideas and protective of those who advocate disruptive technologies.” More than platforms and payloads, our “Unknown” and “Under-Utilized” sailors are the Navy’s asymmetric advantage today.

To reach these sailors, the Navy must do two things:

First, pathways for innovative ideas and individuals are required today for our Navy to win tomorrow. When the enemy denies us use of multi-billion dollar platforms, systems, or satellites, the difference between victory and defeat will be those who can think, adapt, act, and inspire quickest. We cannot afford to build these pathways after the first strike; we must build this culture now.

Organizations like the CRIC leave such a gaping void because they allow sailors to practice both initiative and leadership. They are an empowering construct that clearly communicates trust between senior and junior leaders. They are a proving ground for new policies and technologies that would otherwise take us decades to bring to the Fleet. We need more outlets like this in our Navy, not less.

Funding, however, is a constraint. Junior sailors do not have a hand in programming or budgeting decisions that will affect the forces they lead in the future. They cannot advocate before Congress the absolute necessity of robust pathways for innovation from the deckplates.

Yet, as they have been doing since before the days of the Naval Lyceum, committed sailors come together in the margins of our service to support one another and share ideas. Today, CRIC[x], the Defense Entrepreneurs Forum, and the Naval Constellation host a vibrant “shadow Navy” of officers, enlisted, and civilians of every rank, fleet area, and background.

In order to capitalize on the talent of these groups, the Navy must develop pathways for individuals to lead their own projects or actively influence policy throughout the fleet. If Congressional marks preclude us from funding organizations like CRIC, commands in DC, Millington, and every fleet concentration area should develop local innovation cells and red teams.

Precedence for these moves can be found in the first innovation cells started by Admiral Stavridis more than 20 years ago, and more recently, by Pacific Fleet’s “The Bridge” innovation group. These small pockets of dedicated sailors can be a command’s competitive advantage, helping adapt to both dynamic wartime circumstances and common-sense reform to improve quality of life for all sailors.

Second, we must define what we mean by “innovation,” communicate our intent, and back it all up.

Innovation is defined differently by different people. Sailors ask, “Do you want me to build something? Or think something?” As a service, our answer should be, “All of the above, if you can!” Whether it is a product, a policy, or inculcating a different way of thinking, we should seek to empower and connect those who boldly and constructively work to make our Navy better.

However, we need to communicate this in a way that sailors can recognize, remember, and repeat. Apple’s “Think Different” advertising campaign defined their brand in just two words; our Navy should be similarly brief.

Despite the CNO’s call for “high velocity learning” in the force, rampant misunderstanding abounds. There are still commanding officers and staffs that snuff out or disparage innovators in their ranks.

One thing is clear: whether it comes from SECNAV or CNO, innovators need top-cover from the highest level to succeed. While many COs and mid-level staff officers are part of the solution, there are a significant number of officers, enlisted, and General Schedule workers who comprise the “frozen middle,” stultifying progress for any number of reasons. If we want to do things faster, and better, we need both leadership from the very top to “have our backs,” and the groundswell of energy from below that already exists.

These are not new ideas. In the same September 2001 Proceedings article, Admiral Stavridis advocated for the service to “[create] an idea factory on the sea service staffs,” “build a cadre of innovators,” “emphasize prototyping and leasing,” and “explore a ‘dual track’ procurement system,” among other recommendations.

Fifteen years has passed since his writing. Innovation from the deckplates is still imperative for the Navy. Yet we are stuck steaming in circles, instead of making way towards the horizon. We may be able to gap billets and programs, but we cannot gap ideas, and we cannot gap leadership.

We are a service of command by negation and, more recently, distributed lethality. Let us also innovate by negation, and distribute our ideas, trust, and ingenuity. If we fail to unfurl our sails as such and set a bold course, we may find ourselves asking:

What happens when naval innovation from the deckplates is deferred? “Does it dry up, like a raisin in the sun?”

LT Roger Misso is an E-2C Naval Flight Officer. He is currently working at the Pentagon, and in the shadows to advance naval innovation. You can find him on Twitter @rogermisso. The views express herein are solely those of the author and are presented in his personal capacity on his own initiative. They do not reflect the official positions of the Department of Defense, or any other U.S. Government agency.