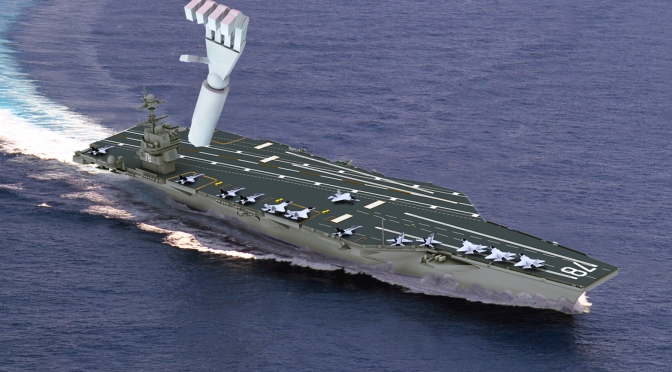 The U.S. Navy, contractor Lockheed Martin, and shipbuilder Newport News are racing to complete a key component for the new aircraft carrier USS Gerald R. Ford – an 80-meter-wide retractable hand. Seen by proponents as a game-changer that will reinvigorate the carrier platform, critics contend that Navy plans to put a giant mechanical hand at sea are ill-conceived and threaten to derail the new carrier’s 2016 commissioning.

What is It?
Those familiar with Giant Hand describe it as a key part of the Gerald Ford, second only to the carrier air wing itself. A close to the program described it as, “… a hard power tool and a soft power tool, a strategic communications tool and, like, just, wow.” The source was overcome with emotion and could not give further comment.

Although shrouded in secrecy Giant Hand is thought to primarily be a weapon system. Stowed in a protected position behind the carrier’s “island,” Giant Hand can be deployed to shield Ford-class aircraft carriers from Chinese DF-21 anti-ship ballistic missiles. Giant Hand can also be used to counter swarm attacks by smaller vessels or engage land targets up to 50 meters from shore. Giant Hand is also thought to have a secondary capability as a secure, line of sight communication system.

Yet cost overruns and technical problems have plagued the program. Giant Hand is $855 million over budget and said to be fourteen months behind schedule. Further, the middle finger currently does not fully extend, a problem the Navy admits hinders Giant Hand’s communication uses.

Said an obviously disappointed source: “We were hoping to have a smaller version of Giant Hand ready to signal to the Chinese at RIMPAC this summer, but that appears increasingly unlikely.”

According to a leaked document, Gerald Ford and other ships equipped with Giant Hand will also be able to perform “enhanced humanitarian and goodwill missions.” Ships will be able to “steam off a coastline, waving Giant Hand in a friendly gesture of American goodwill that will be seen for miles in all directions. This will allow us to discontinue our annual humanitarian assistance cruises in Asia, the South Pacific, Africa, and Central America.”

Calls to the Navy’s Giant Hand program office were not returned.

Hidden in Plain Sight
Defense watchers first spotted the Giant Hand program in a list of classified Navy programs identified by what was assumed to be a code name. “It was listed under classified surface warfare programs, with the name GIANT HAND,” explained H. Philip Vultureman, leading analyst at the Munroe Institute for Defense. “Nobody knew what it was. Turns out it was literally a giant hand.”

Giant Hand is one of several new technologies to be introduced in the Ford-class carriers, along with the Electromagnetic Aircraft Launch System (EMALS), increased automation, stealth features, and the new A1B nuclear reactor. Navy leadership is banking on Giant Hand to give it a decisive advantage over the The Chinese People’s Liberation Army Navy (PLAN), which commissioned its first aircraft carrier in 2012 and has reportedly started work on indigenously building more.

China is thought to have requirements for at least three carriers, and U.S. Navy officials are said to have looked for new technology that would preserve the Navy’s lead.

“The Chinese have an aircraft carrier,” said one U.S. Navy admiral smugly, “but it doesn’t have a giant mechanical hand on it.”

Critics Not Impressed
Critics contend that Giant Hand is a prime example of a flawed defense program. “It’s too expensive, the technology isn’t proven, and the hand is not wide enough,” argues Jacques Shower, a defense analyst who helped design the F-16 fighter jet.

“Internal navy studies say that the Giant Hand needed to be 150 meters wide to crush a Somali pirate village,” Shower said, “but the Navy could only fund an 80-meter hand. So instead of going back to Congress and saying, ‘We need more money to do this right’, they just saluted and built a medium-sized hand. Only they still call it a giant hand. The requirements still stand.”

Privately, Navy officials concede that they’d like the hand to be wider and it may need two or three blows to flatten a Somali pirate village. Still, officials believe that as currently designed the hand will be capable of fulfilling the mission.

Chief of Naval Operations Admiral Jonathan Greenert is said to be cautiously optimistic about Giant Hand, after receiving a classified briefing on the program early January. “The United States Navy won’t be out-sticked,” he is said to have stated, “and we surely will not be under-handed.”

Kyle Mizokami writes on defense and security issues in Asia, particularly Japan. He is the founder and editor for the blogs Japan Security Watch, Asia Security Watch and War Is Boring. Contributor at Medium, The Atlantic.com, Salon, The Japan Times and The Diplomat.