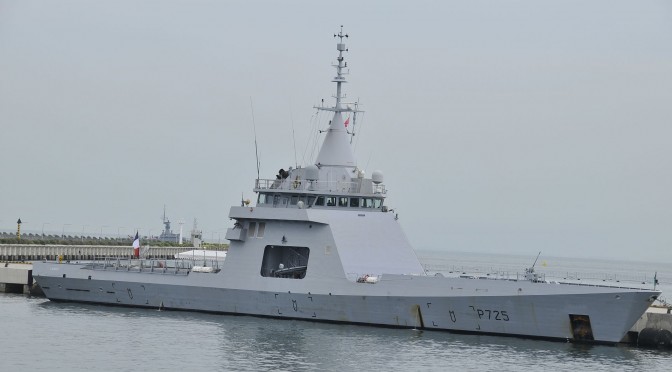 2014 has been a significant year for African maritime forces. As the threat of piracy in the Gulf of Aden and the Gulf of Guinea endures, many African countries have been rapidly expanding their maritime forces. Of particular interest are the procurements made by those states which are not typically counted among Africa’s leading military powers. In June 2014, small but oil-rich Equatorial Guinea unveiled a jury-rigged frigate to lead its emerging naval force. But now Equatorial Guinea’s southern neighbour, Gabon, is also looking to expand its navy.

Gabon’s coastline is substantially longer than that of Equatorial Guinea, stretching out to 885 kilometres total as compared to the latter’s 296 kilometres. But the Gabonese have long had only eight small patrol vessels and a single fast attack craft to rely upon for coastal defence. While attending the Euronaval 2014 exhibition in October, however, Gabonese officials decided to acquire two new offshore patrol vessels from France, both of which boast impressive features that should greatly expand Gabon’s maritime capabilities.

This procurement was not made on a whim. In July 2013, Gabon became the most southerly African victim of piracy when an oil tanker was hijacked off the Gabonese coast. The 24-member crew was unharmed and the tanker – minus some of its cargo – was released in Nigerian waters five days later. This experience doubtless led Gabonese officials to consider the security of the country’s coast and in particular, Port Gentil. This is one of Gabon’s most important port, through which much of Gabon’s oil and lumber exports pass amounting to roughly $6.8 billion each year.

With the emergence of Equatorial Guinea as a maritime power and Gabon’s force expansion, the security of the Gulf of Guinea’s southern end will be greatly improved. It is now the northern end of the Gulf which will require greater attention in regional efforts against piracy. In particular, the Togolese and Beninese coasts represent a gap in the defences. The Togolese Navy currently consists of two patrol boats, while Benin has turned to private military contractors to secure its main port of Cotonou. These small states lack the resources and personnel to support professional naval forces on the scale of neighbouring Nigeria or Ghana.

West African pirates have a demonstrated capacity to adapt to changing circumstances, relocating to where patrols are less frequent. In order to avoid Beninese and Togolese waters’ becoming a safe refuge for the region’s pirates, it may be necessary for the Economic Community of West African States (ECOWAS) to promote joint patrols by the maritime forces of its member states. Although this certainly would not apply to Gabon and Equatorial Guinea – both are members of the Economic Community of Central African States (ECCAS) – such joint patrols could help to plug the gaps, bringing together Beninese and Nigerian vessels to patrol Benin’s coastal waters. This increased presence could serve to deter even the most determined pirates.

There are some hopeful signs that West Africa may be moving in this direction. In June 2013, an ambitious summit in Cameroon led to the adoption by the ECOWAS member states of two important documents: a Code of Conduct on Counter-Piracy Efforts, and a Memorandum of Understanding on Maritime Security. A month later, naval chiefs from thirteen West African countries gathered in the port city of Calabar, Nigeria, to further articulate a regional counter-piracy strategy and exchange best practices. This dialogue may be precisely what is needed to bring about defence sharing, or at least the intensification of joint patrols.

Paul Pryce is a Research Analyst at the NATO Council of Canada. With degrees in political science from universities in both Canada and Estonia, he has previously worked as a Research Fellow at the OSCE Parliamentary Assembly and an Associate Fellow at the Latvian Institute of International Affairs. His research interests are diverse and include maritime security, NATO affairs, and African regional integration.

This article originally appeared at the NATO Council of Canada and was cross-posted by permission.