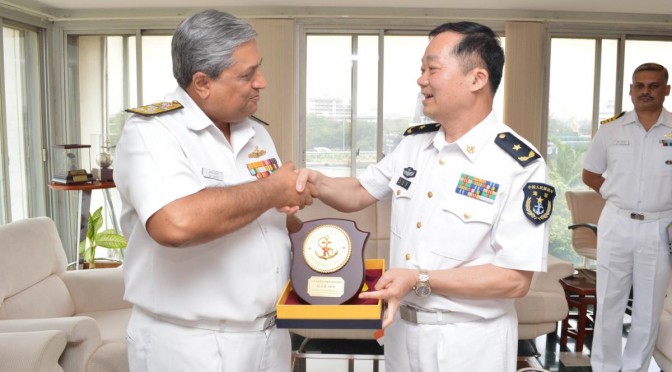 This article originally featured at the National Maritime Foundation. It may be read in its original form here.

On 4th February 2016, India and China held their first-ever ‘Maritime Affairs Dialogue’ at New Delhi. While the Indian side was led by the Joint Secretary (Disarmament and International Security Affairs) in the Ministry of External Affairs (MEA), the Chinese delegation was led by the Assistant Minister of the Chinese Ministry of Foreign Affairs (MFA). Given that the two sides agreed to institutionalize a dialogue, the inaugural event was indeed ‘seminal.’ Although the details of the discussions are not yet available in the public domain, this essay attempts to extrapolate the open-source reports, and ‘look beyond’ it in context of emerging imperatives.

Since the turn of the new millennium, or even earlier, it began to be realized and acknowledged world-wide that the texture of future security and geopolitical environment in the ‘resurgent’ Asia will depend much upon how the two resident regional powers – India and China – will shape their relations at the bilateral level. The two countries have traditionally been continental neighbours. However, since at least a decade ago, the waters of the Indo-Pacific have become an arena for a maritime interface between the two in diverse arenas encompassing geopolitics, economics and security issues. The need, therefore, for the two countries to institutionalize a maritime dialogue has been long overdue. It may be recalled that the foreign ministers of two sides had first decided to initiate the maritime dialogue nearly four years ago in March 2012. Such an arrangement is essential to foster cooperation, while also preventing unproductive competition and confrontation.

Soon after the first Dialogue, the Indian MEA issued a press-release indicating its essentials. It states:

“The dialogue covered issues of mutual interest, including exchange of perspectives on maritime security, developments in international regimes such as UNCLOS (United Nations Convention on the Law of the Sea, 1982) and (the other) IMO (-related treaties) and prospects for maritime cooperation”.

The Chinese MFA press-release on the Dialogue states:

The ‘exchange of views and perspectives on maritime security’ may have begun with the two sides drawing satisfaction from the successful multinational anti-piracy mission in the Gulf of Aden, wherein India and China have been coordinating their policies and naval operations since 2008, including at the ‘Contact Group on Piracy off the Coast of Somalia’ (CGPCS). The discussions may have also included other issues relating to good order at sea in the Indo-Pacific region.

The “international regimes” are likely to have been discussed in the context of the developments in the South China Sea (SCS) relating to the maritime-territorial disputes, freedom of navigation, and resource exploration. These discussions would have been valuable for both sides. For India, it is necessary to tell China its position on its hydrocarbon exploration in the SCS and its growing naval engagements with the other SCS littoral countries. To China, it was an opportunity to present its perspectives, achieve transparency of policies, and allay concerns of the regional countries over its increased politico-military assertiveness in the region.

It seems, however, that the first India-China Maritime Dialogue was essentially an ‘ice-breaker,’ and in their own ways, both sides had envisaged their objectives to be rather limited, rather than symbolic. Since the Indian side was led by a Joint Secretary, the representation from the ‘functional’ agencies/ navy would have been pitched at the ‘Director/ one-star’ level or even below. From China’s perspective, the dialogue seems to have been accorded even lesser significance. The photograph released by the Chinese MFA indicates that the Chinese side did not have any naval representation at all, at least not in uniform.

Notably, two days earlier, a Chinese delegation under the same leadership was in Islamabad for the second China-Pakistan Maritime Dialogue; the first dialogue having been held in Beijing in July 2014. Since Pakistan’s delegation was headed by an Additional Secretary of the Foreign Ministry, functionaries much above the ‘Director/ one-star’ level would have been represented. The Islamabad event itself, the higher level of representation and the indicative scope of the discussions encompassing ‘maritime connectivity’, ‘security of international shipping lanes’ (ISL), ‘marine scientific research’, ‘search and rescue’ and ‘naval and coast-guard cooperation’ reveal the difference.

On the Dialogue in New Delhi, neither the Indian nor the Chinese official report mentions any discussion on China’s ‘Maritime Silk Road’ (MSR) initiative, which is surprising. Further, the discussions on ‘practical cooperation’ on each of the issues mentioned in the Chinese MFA report is unlikely to have gone beyond China gauging whether and to what extent India is amenable to the prospect of cooperation on a particular issue. The mention of ‘marine scientific research’ is particularly instructive. It is a pointer to China’s emergence as a major maritime power and its intent to undertake such research in the Indian Ocean, with major strategic implications for India.

The next round of the India-China Maritime Dialogue is planned to “be held in Beijing on a mutually convenient date.” The agenda for this – and the ensuing dialogues – may need to be more ‘encompassing’, and include key issues that hold the key to a ‘harmonious’ maritime interface between the two countries. Most of these substantive issues broadly relate to China’s strategic intent in the Indian Ocean. These include ironing out the prevailing ambiguities of China’s MSR initiative, the rationale behind its emphasis on cooperating on ‘marine scientific research’’, and an agreement on a naval code of conduct for both force deployments and unintended tactical encounters, which could then be reciprocated by India with regard to its own naval units in the western Pacific.

To address these issues, Dr. Ouyang Gouxing of China’s Hainan Academy for World Watch (HNIWW) aptly recommends a 2+2 Dialogue, wherein both sides are represented at the apex level by their respective foreign and defence ministries. He adds that the Chinese delegation would need to include a PLA Navy contingent from its South Sea Fleet (SSF), which is being integrated to the South War Zone responsible for China’s Indian Ocean strategy. India may also need to upgrade its naval participation accordingly. Hopefully, in due course, the two sides would be able to transcend bilateral issues and develop sufficient mutual trust to contribute to maritime security and stability in the Indo-Pacific region.

Captain Gurpreet S Khurana, PhD is Executive Director, National Maritime Foundation (NMF), New Delhi. The views expressed are his own and do not reflect the official policy or position of the NMF, the Indian Navy, or the Government of India. He can be reached at gurpreet.bulbul@gmail.com.