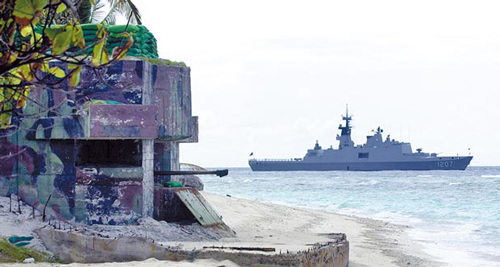 The South China Sea has turned into a hotspot for potential regional conflicts in recent years. Nonetheless, parties concerned have already tried their best efforts to establish certain mechanisms to prevent crisis and reduce tension together. The first significant initiative was the “Declaration on the Conduct of Parties in the South China Sea”, known as the DOC, signed by all the members of the ASEAN and the People’s Republic of China on November 4, 2002.

Although the Article Ten of the DOC explicitly noted with “The Parties concerned reaffirm that the adoption of a code of conduct in the South China Sea would further promote peace and stability in the region and agree to work, on the basis of consensus, towards the eventual attainment of this objective.”, yet no substantial progress has been achieved since then. On July 20, 2011, another joint statement signed by the ASEAN members states and the PRC known as the “Guidelines for the Implementation of the DOC” was noted as another milestone for “embodying their collective commitment to promoting peace, stability and mutual trust and to ensuring the peaceful resolution of disputes in the South China Sea.” Nonetheless, the Code of Conduct was never mentioned by the later established guidelines. It may also imply the actual pessimistic situation for formulating the South China Sea Code of Conduct.

According to the present structure for negotiating the South China Sea Code of Conduct, there are several arrangements that can be challenged since they may eventually undermine the legitimacy of the COC as an effective mechanism to affect behaviors of every party involved in theSouth China Sea.

First, the Republic of China now in Taiwan was never invited to join the COC negotiation process. It is obviously opposed by Beijing for negating the ROC presence in the international community. And all ASEAN members follow the “one China” policy as the prior condition when they established the diplomatic relationship with the PRC. It is not surprised to see that the ROC is excluded from the collective effort so far. Nonetheless, the ROC is not only a claimant of the territories and waters of the South China Se,. Taipei is a substantial occupant of a major island, Tai-Ping Island, in the South China Sea. Further, Taiwan also actively conducts various maritime activities in the South China Sea. Without Taipei’s involvement and consent, how can the South China Sea Code of Conduct be a meaningful mechanism to assure the stability and peace in the South China Sea?

Compared to Myanmar, Thailand, Cambodia, Singapore and Laos, the Republic of China should have more reasons to be involved in the negotiation process since all these ASEAN states noted above are not adjacent to the South China Sea at all. Taipei should also have the better reason than Jakarta to sit together with other claimants of the territories in the South China Sea since Indonesia is not even a claimant but only concerned of its Economic Exclusive Zone. Although Beijing frequently implies that all Taipei’s privileges and interests in the South China Sea will be guaranteed by the People’s Republic of China, the proposal has never been accepted by Taipei. Any assurance like this will not be recognized by ASEAN member states.

Based on the flaws already mentioned, the author would like to propose a “Multi-chaptered South China Sea Code of Conduct” in order to make this document can be more sensible and functional also. The South China Sea Code of Conduct should be categorized into several chapters according to participants’ conditions. In another word, it should be modularized by function and status accordingly.

A multi-chaptered South China Sea Code of Conduct may allow states using the South China Sea for whatever reason to choose those chapters they would like to sign and promise to follow the code accordingly. Several chapters like environmental protection, fishery regulation, search and rescue, scientific research, climate report, oceanographic survey, anti-piracy and smuggling, nature preservation, sewage and waste process, navigation aid and regulation can be easily established with no controversy. For those codes that intentionally restrict behaviors enhancing future territory claim position, we should consider to replace the term of “claimants” into “occupants” so reducing the de jure proclamation by more objectively expressing the de facto statement.