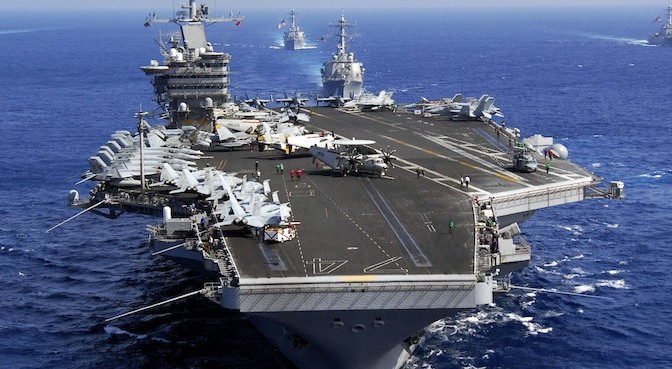 Welcome to Part One of the October 2015 Member Round-Up, covering the first two weeks of the month. Over the past two weeks CIMSEC members have examined several international maritime security issues, including the U.S. South China Sea Initiative, Russian military operations in Syria and the Mediterranean Sea, the strategic importance of the Arctic and aspects of the U.S. Navy’s procurement strategy.

Beginning the Round-Up at The Diplomat, Ankit Panda discusses the changes made by the Senate to the National Defense Authorization Act 2016 (NDAA 2016). The bill’s new features include Taiwan among a list of countries that will receive financial and military assistance from the U.S. for operations in the South China Sea. Additionally, the NDAA 2016 outlines the new U.S. South China Sea Initiative, which aims to increase maritime security and maritime domain awareness for foreign countries in the region. Also for The Diplomat, Ankit Panda shares a second article where he discusses Chinese coast guard operations near the disputed Senkaku/ Diaoyu Islands. These operations have substantially increased East China Sea tensions as the Chinese coast guard continues to enter Japanese territorial waters to support their claim over the islands.

ADM. James Stavridis in an interview with Bloomberg Business discusses the U.S. government’s position towards the artificial islands being constructed in the South China Sea. ADM. Stavridis states that from the U.S. perspective the islands will not affect freedom of navigation (FON) considering the islands represent international sea and air space and not sovereign Chinese territory.

Leaving the Asia-Pacific, ADM. Stavridis speaks with Bloomberg News concerning Russian and U.S. operations within Syria and the Mediterranean Sea. He explains that both countries’ naval and air forces in the region have not established deconfliction processes meaning their local command structures are not communicating with each other. In addition, ADM. Stavridis states that the U.S. will need to prioritize ISIS over other security objectives in the region, a strategy that will consist of significant increases in ground force deployments in Iraq and eventually Syria.

Chuck Hill, for his Coast Guard Blog, discuses the recent cruise missile attacks launched by Russian naval forces from the Caspian Sea against targets throughout Syria. Mr. Hill identifies that these attacks demonstrate Russian surface combatant capabilities similar to that of a U.S. Tomahawk cruise missile being launched from a U.S. vessel. Further to this, Mr. Hill explains that the Russian vessels launching the attacks resemble less-lethal equivalents in the U.S. Navy, revealing that Russian naval forces are practicing distributed lethality while the U.S. Navy is still deliberating over its implementation.

Sam LaGrone, at U.S. Naval Institute News, also discusses the expanding Russian operations within Syria. Mr. LaGrone analyzes the deployment of a Black Sea-based Russian surface action group to the Eastern Mediterranean to provide an air defense bubble in support of Russian fighters striking targets in Syria. These deployments are in addition to the arrival of a Russian surveillance ship as well as several Russian amphibious assault ships in the region.

Dave Majumdar, for The National Interest, discusses features of the U.S. Navy’s plan to acquire rail-guns, lasers and nuclear power across the entire future surface combatant fleet. Mr. Majumdar identifies that the future Navy warship will require large amounts of eclectic power to run advanced systems including power-hungry radar systems and energy weapons. Additionally, the current DD-51 and Ticonderoga-class hull-forms will need to be replaced to allow for developing guided-missile destroyers to be equipped with Raytheon’s AN/SPY-6 Air and Missile Defense Radar.

To conclude Part One of the October Round-Up, Chuck Hill for his Coast Guard Blog analyzes the U.S. Navy’s decision to commit to the selection of the Longbow Hellfire missile as a provisional weapon system to offer offensive capabilities for Littoral Combat Ships. Mr. Hill explains that the Longbow Hellfire missile system will be extremely effective against highly maneuverable and high speed fast-attack craft and if deployed in large volumes, can also be effective against larger surface threats.

Members at CIMSEC were also active elsewhere during the first part of October: