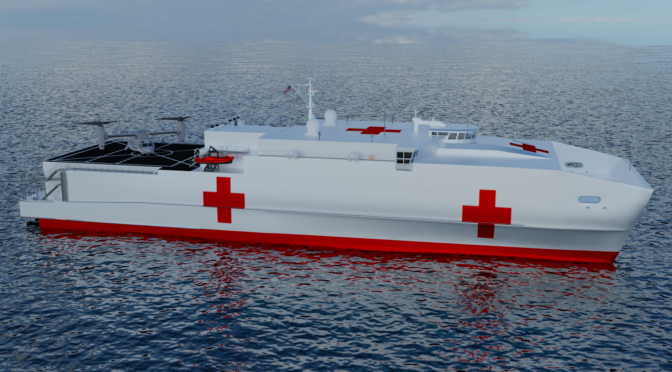 The medical fleet is often overlooked in discussions about Distributed Maritime Operations (DMOs). The goal of DMO is to keep warships in the fight and use all available means necessary to prevail in a modern conflict against a near-peer adversary. But what happens when all available means are simply not enough and fleet assets suffer losses? How will the U.S. Navy get personnel out of the water, into the appropriate medical care, and back in the fight when faced with an impermissible environment and large numbers of potential casualties? Austal was awarded a contract to construct two Expeditionary Fast Transport (EPFs) vessels to be used as “ambulance ships” in such scenarios. Due to the limitations of the EPF designs, however, converted Offshore Supply Vessels (OSVs) are also required to create the well-rounded medical fleet needed for modern day maritime conflict.

EPFs are based off a commercial design used for ferries in various parts of the world. They are designed to be fast and transport a moderate amount of cargo. The EPF design also incorporates a military flight deck, potentially capable of operating with all fleet rotary-wing aircraft, to include MV-22s. However, this can only be done if the sea state is favorable; higher sea states drastically impact EPF seakeeping ability and can significantly hinder flight operations. EPFs also have light, shallow draft hulls, which allow them to reach high speeds and access more ports. This choice of construction materials, however, has led to issues with hull longevity and structural defects. The catamaran hull design adds to their high speed and shallow draft advantages, but it also detracts from their seakeeping ability. Their lack of underwater hull volume means that for their size and footprint, their internal volume is limited, giving them comparatively less room for mission equipment. Overall, the EPF design lends itself to high speed “sprint” operations, but little else.

OSVs, on the other hand, are designed to transport cargo to and from oil rigs and other offshore installations. Their ability to move large payloads makes them valuable assets for a vast array of other purposes as well. Like EPFs, OSVs have shallow draft hulls to access more ports. Unlike EPFs, however, some OSVs are equipped with bilge keels to improve seakeeping ability, increasing operational limits and the types of missions that can be conducted in adverse weather conditions. The only area in which EPFs design outperform OSVs is speed; most OSVs are limited to around 13 knots. However, some designs are optimized for greater speeds with a different thruster configuration. The OSVs modifiability and adaptability makes it the ideal platform to work in combination with EPFs to improve the capability of the medical fleet.

The U.S. Coast Guard utilizes a Mass Rescue Operations (MRO) model when a casualty happens at sea. They use all available means necessary to get to the scene of the casualty even if Coast Guard assets are not available or in range. Coast Guard personnel alert nearby commercial vessels via maritime communication circuits, including VHF and satellite circuits, and notify shore-side facilities to execute their role in the response. In the MRO concept, there is a designated triage area land-side where first responders will be staged to wait for casualties. Importantly, the MRO concept is for peacetime casualties at sea. Wartime casualty response presents significantly greater challenges.

In wartime, The U.S. Navy is not guaranteed to have the luxury of working with nearby commercial vessels or shore-side facilities when a casualty happens at sea, especially not in a conflict area. Personnel recovery, primary triage, and medical care will have to be conducted by afloat assets such as EPFs. With greater speed, EPFs have the ability to rapidly arrive on station and commence initial rescue operations. However, with an augmented crew of rescue personnel and medical care providers, the EPF platform will quickly run out of room for rescued personnel, and any serious injuries will likely exceed the medical treatment capability that can be realistically operated aboard an EPF. This is where modified OSV-style platforms can be leveraged to provide additional capability. Once rescue and triage are accomplished, the personnel can be transferred from the EPF to one of several OSV-style platforms operating in the theater.

Many rescued personnel may be uninjured or in good condition, requiring little in the way of medical care. All personnel assessed as a level “green” patient will then be transported to the “green” OSV. This OSV will be an adapted “floatel,” which is a mobile accommodation vessel commonly used to house large numbers of personnel on offshore projects. These ships usually have a gangway incorporated into the Dynamic Positioning (DP) system that helps them to maintain position relative to another vessel or installation and allows for safe personnel transfers. They also have a large accommodation area on their deck that can be modified to accept aviation assets commonly used throughout the fleet to conduct personnel transfers and search-and-rescue operations. This is where the green casualties will stay. There will be psychologists and therapists onboard to respond and clear rescued personnel to either be returned stateside or transferred to other positions in theater, via aviation assets or in a friendly port.

All personnel assessed as “yellow” or “red” will go to the “yellow/red” OSV once an EPF has run out of space in its 100 Intensive Care Unit (ICU). This vessel will be equipped with extensive trauma-oriented medical facilities geared towards stabilization of injured personnel. Patients requiring medical treatment can be stabilized here before transfer, either to the “green” OSV after successful treatment, or to shore-side facilities or afloat medical assets operating outside of the conflict area. The back deck and accommodation area can be modified to house machines for conducting MRIs, CAT scans, and X-Rays, as well as other facilities and additional physicians required to quickly stabilize injured personnel.

While the EPFs will have two operating rooms onboard, it is likely there will be an overflow of red patients during a mass casualty. These red patients can be stabilized aboard the OSV and prepared to be transported by aviation assets to the Mercy-class hospital ships, which must operate outside of the “danger area” in which the majority of combat losses would be expected to occur, or to shore-side medical treatment facilities. Such transfers would likely require the use of MV-22 aircraft due to the distances involved, so the vessel would have to be modified with an appropriately rated flight deck. The yellow/red OSV will also be equipped with additional operating rooms, blood banks, patient movement equipment, and other facilities needed to address serious trauma cases.

The “Golden Hour” is a concept that shows how the amount of time it takes for an injured person to get treatment directly effects the life or death outcome. Once patients are triaged, getting them stabilized and to the medical care needed in a timely manner increases their chances of living.

There is no shortage of OSVs available for the medical fleet. Due to the oil downturn in 2014, multiple companies have laid up, sold, or reflagged their ships. This “stacked” fleet of laid-up OSVs are ready to be used and ripe for repurposing to meet Navy, Marine Corps, Army, and Air Force needs. These vessels could be converted at relatively little cost and would likely be available much sooner than the time needed to construct and test the EPF ambulance ship concept. In the meantime, if needed, these OSVs could operate without EPFs, with the caveat of increased response time. These OSVs could also be used to store medical supplies, provide additional accommodations for medical personnel, and meet other auxiliary needs for medical and rescue missions.

From a manpower perspective, U.S. Military Sealift Command (MSC) has a long history of operating Navy hospital ships and other auxiliary vessels, and merchant mariners who work for MSC are often proficient in operating with naval forces in contested environments. There are also a large numbers of mariners familiar with OSV operations that are available to hire due to drastic crew cuts in the Gulf of Mexico during the oil downturn. Placing the repurposed OSVs under the control of MSC, while initiating an aggressive targeted hiring plan, would easily provide the requisite number of merchant mariners to man a significant number of OSV style platforms, which are designed to be operated by smaller-than-normal crew as it is.

While the Austal EPF ambulance ship concept has its merits, it also has significant limitations that cannot be fixed within the constraints of the vessel’s base design. However, by leveraging the strengths of built-for-speed EPFs in combination with converted OSVs, the medical fleet will be capable of rescue operations and wartime casualty response in a modern day maritime conflict. For the minimal investment necessary to repurpose these available, surplus commercial products, a vast increase in capability needed for Distributed Maritime Operations can be obtained.

Misty Wilkins has worked on OSVs for three years and is currently sailing as a 2nd Mate. A 2018 graduate of the Texas Maritime Academy, she is also a Lieutenant Junior Grade in the U.S. Strategic Sealift Officer program, where she serves most of her active duty time as a Tactical Advisor (TACAD). She has written multiple papers on the employment of OSVs in support of naval forces and plans to write more.