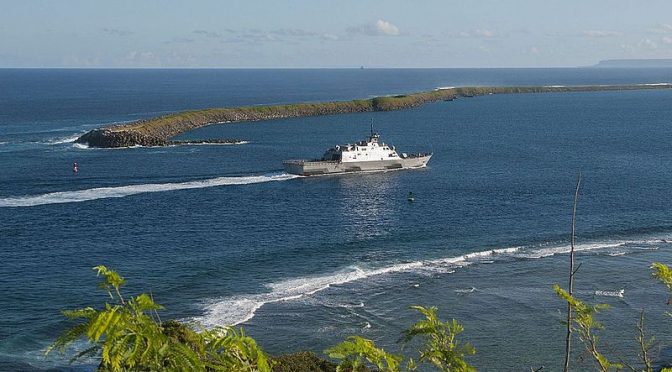 The following article originally appeared by The National Interest and is republished with the author’s permission. It may be read in its original form here.

A new article from Wayne Hughes is a treat for anyone in naval geekdom. Captain Hughes literally wrote the book on U.S. Navy fleet tactics and coastal combat; I still schlep around my dog-eared copy of Fleet Tactics from my midshipman days in the 1980s. It keeps good company with tracts from Clausewitz, Corbett and the boys.

But last month over at USNI Blog, Hughes and a brace of Naval Postgraduate School colleagues proposed the concept of “mesh networks.” It refers to a dispersed yet networked ships, planes, weapons, and sensors that are able to seize the initiative from regional adversaries, maneuver in both physical and cyberspace, and prevail in near-shore combat. The whole thing is worth a read.

It’s a compelling read in many respects. Hughes and his coauthors accentuate how complex and menacing offshore waters and skies can be. For instance, we tend to evaluate weapons in large part by their firing range. Outrange a foe and you acquire a significant tactical edge. Similar to boxing, in sea fights, the pugilist with greatest range can wallop his opponent before he has the chance to strike back. The perpetrator inflicts damage without absorbing any himself.

But range is mainly an asset for open-ocean battle. The open sea resembles a vast, featureless plain; weapons can reach their full potential there. Ships and planes can pound away from their maximum firing ranges. Littoral combat, by contrast, compacts the distances at which battle takes place. You have to get close to shore to strike inland, land troops, or blockade enemy harbors.

To continue the boxing analogy, it is similar to forcing boxers to fight in the clinch rather than dancing around the ring. The fight transpires within weapons range of an enemy who’s fighting on his own ground, with all of his manpower and armaments close to hand. Compressing the theater, then, attenuates any range advantage U.S. forces may enjoy, or nullifies it altogether.

And if that’s not bad enough, inshore combat constricts the time available to defend against incoming rounds. Dexterity is essential when forced to cope with myriad challenges. Scattering and moving sensors and “shooters” around the theater constitutes one way to confound foes—provided U.S. forces can still mass firepower at the decisive place on the map at the decisive time. Hence the concept of nimble, “networked” forces. Despite the concept’s virtues, it feels incomplete and abstract, possibly even otherworldly.

That’s because it slights the human dimension of sea combat—a hazardous thing to do when contemplating how to wage war, an intensely human enterprise. My advice is to look not to a U.S. Navy admiral but to a U.S. Air Force colonel for insight into how to prosecute littoral combat. Let’s keep the human in human competition—enriching mesh-network tactics.

The coauthors make the late Vice Admiral Arthur Cebrowski’s model of decision-making their own, using it to explore the potential of offshore networks. Cebrowski describes tactics as a three-phase cycle. Sensing represents the first phase. Combatants gather and exchange data about their surroundings. They next decide what arms and tactics to deploy within those surroundings. And then they act on the decision, with the aim of getting off the first effective shot. Sense, decide, act. It makes sense on the surface, but the trouble is that this approach is too mechanical. It makes little allowance for the messiness that is human interaction in a competitive environment.

Cebrowski implies that in combat you can plug data into an algorithm, churn out an answer, and do what the algorithm says. Colonel John Boyd, a fighter pilot and self-made strategist, interjects a fourth element into the decision cycle. The tactical surroundings, says Boyd, are constantly in flux. It’s not enough to collect information about the setting. It’s about orienting oneself to the setting before making a decision and acting.

For Boyd, then, the cycle goes observe, orient, decide, act—OODA. Fail to orient to the surroundings and you are disoriented, estranged from the reality around you. Losing touch with reality represents a dangerous situation at the best of times—but especially in combat. The victor, oftentimes, is the combatant best in tune with the situation. So orienting is important.

How do you do it? It’s a process of assimilating and analyzing new information that comes in from sensors and other sources. Sounds like Cebrowski’s decide function. But Boyd also maintains that past experience shapes how combatants adapt to their surroundings. So do cultural traditions. So does “genetic heritage.” Boyd even factors in the biological basis of human cognition.

The fighter pilot thus incorporates not-strictly-rational components of human decision-making into his paradigm for tactics and strategy, adding texture to the model. Thinkers from Machiavelli to Taleb warn that people are hardwired to think in linear terms, projecting the past into the future in a straight line. Past trends constitute the best guide to future events.

Nor is orientation some incidental or throwaway element of the decision cycle. Boyd portrays it as the one element to rule them all: “The second O, orientation—as the repository of our genetic heritage, cultural tradition, and previous experiences—is the most important part of the O-O-D-A loop since it shapes the way we observe, the way we decide, the way we act.”

There’s a corollary to Boyd’s decision-making taxonomy. Pit two antagonists against each other, both of which are struggling to observe, orient, decide, and act effectively. Orienting swiftly and accurately is a defensive endeavor. But if there’s an orient function whereby each antagonist tries to stay abreast of change, there must also be an offensive, disorient function to the OODA cycle.

And indeed, Boyd beseeches savvy contestants to spring “fast transients” on their adversaries, seizing control of the environment. Sudden, swift, radical maneuvers befuddle the adversary. Repeated maneuvers cut him off from the tactical or strategic environment altogether, making him easy pickings. Boyd famously defeated every mock adversary he encountered during air-combat training within forty seconds. He ascribed his unbeaten record to fast—unforeseeable—transients.

All models simplify; that’s true in all fields of inquiry. We assume perfect competition in economics, exaggerating economic actors’ rationality for the sake of simplicity. We assume laminar flow in fluid dynamics, disregarding turbulence within the fluid and between the fluid and the pipe wall. And we assume frictionless machinery to illustrate physics and engineering principles.

And this is all to the good—provided economists and physicists disregard only secondary factors for the sake of explaining fundamental concepts, and provided they take account of these factors when they devise economic policies, piping systems, and engines for real-world use. Disregarding a primary factor could invalidate the model altogether. Cebrowski takes the orient function—the most important function—out of the decision cycle. Doing so abstracts any model founded on his theory from reality.

As a legendary pugilist once said, any scheme for human competition and conflict that neglects interaction has dim prospects for success. I urge the Naval Postgraduate School team to reject Cebrowski’s paradigm, and eliminate that fallacy from their worthwhile project. Wargames premised on Boyd’s more realistic decision cycle will yield more meaningful insight into how coastal combat may unfold, and that will bolster U.S. Navy performance.

Naval warfare is an intensely human enterprise, rife with dark passions, chance, and uncertainty. It’s disorderly and erratic, operating by its own topsy-turvy logic. Not for nothing does John Boyd insist that people, ideas, and hardware—in that order—constitute the crucial determinants of victory and defeat. Prioritizing people represents the starting point for wisdom.

James Holmes is Professor of Strategy at the Naval War College and coauthor of Red Star over the Pacific. The views voiced here are his alone.