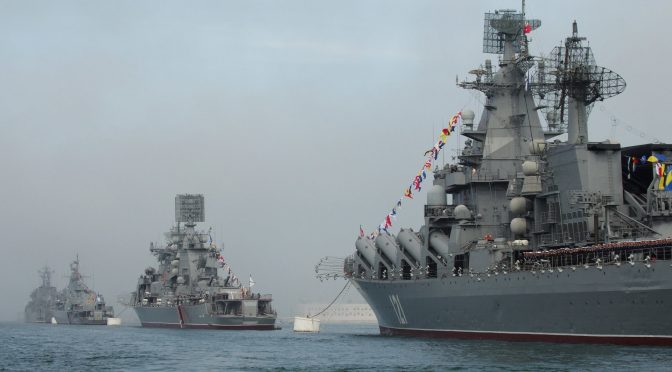 Beginning the roundup at the Bulletin of the Atomic Scientists, Bryan Clark discusses undersea cables and the future of submarine competition. Mr. Clark explains how at least 95% of voice and internet traffic in addition to more than $4 trillion per year in financial transactions travels through about 300 transoceanic fiber-optic cables along the seabed. Due to the likely economic and military impacts a cable break or sabotage would induce on international security and economic dynamics, the ability to threaten or protect undersea cables and their shore landings will become an increasingly important aspect of future conflict – with procurement of advanced submarine and unmanned underwater vehicle (UUV) technology being critical for  addressing this evolving threat. Mr. Clark highlights several of these technologies, including the rise of a new predominant sensing technology characterized by low-frequency active sonar, the use of undersea ‘battle networks’ and the deployment of fixed seabed-based sensors and outposts to augment UUV and submarine operations.

Harry Kazianis, for The National Interest, provides an analysis on the proliferation of anti-ship ballistic and cruise missiles around the globe and the implications the spread of these weapon systems will have on future U.S. aircraft carrier operations in peace and in conflict. Mr. Kazianis notes that the carrier has been at the forefront of every major U.S. combat operation since World War II, but the short ranges of current carrier based fighter aircraft relative to the longer ranges of certain anti-ship missiles – such as China’s DF-21D, or DF-26 ASBM – may limit the usefulness of the carrier as both an effective deterrent and a reliable platform for power projection in contested areas of operation. The article highlights additional variables affecting the relevance of the flattop in A2/AD environments, including the likelihood of successfully targeting a moving carrier at sea deploying an array of countermeasures.

Ankit Panda, for The Diplomat, provides an overview of a Chinese Naval vessel entering Japanese territorial waters and the incident’s reflection of growing tensions between the two countries. Mr. Panda explains that a Type 815 Dongdiao-class spy ship entered Japanese territorial waters on June 15, a move Beijing has not repeated since 2004, when a Chinese nuclear submarine entered Japan’s 12 nautical mile territorial sea near the Sakishima Islands. The article examines whether the Chinese spy ship was abiding by international law, particularly the provisions governing ‘innocent passage’ under the United Nations Convention on the Law of the Sea. Considering the Chinese vessel was a spy ship and sailed within Japanese waters for several hours, Mr. Panda explains that the Japanese Defense Ministry is investigating whether the PLAN vessel was operating in accordance with international law and if follow-up legal action should be taken.

Michal Thim and his colleague Liao Yen-fan, for Taiwan in Perspective, discuss the restructuring of the Taiwanese Navy, and the goal to acquire enhanced air defense capabilities for the fleet. The authors explain that modernization plans have identified interchangeable Aegis-like integrated combat systems (ACS) that pair powerful radars with advanced anti-air and anti-ship weapons as priority procurement targets. However, the recent breakdown in negotiations between Lockheed Martin and Taiwan’s National Chung-Shan Institute of Science and Technology (NCSIST) over the acquisition and technology transfer of the Mk.41 vertical launch system may limit the Navy’s ability to deploy ACS. They add that this breakdown and the resulting procurement limitations represent inherent challenges associated with Taiwan’s arms indigenization objectives.

To conclude the June members’ roundup, Sam LaGrone for U.S. Naval Institute News provides an overview of Russia’s first deployment of a new frigate to the Black Sea Fleet since the end of the Cold War. The Project 11356-class Admiral Grigorovich was sent to a Russian naval base in Crimea, which Mr. LaGrone explains is the first of many new surface ships the Russian Navy intends to base in the Black Sea. He adds that the delivery of the multi-mission surface combatant, capable of engaging submarine, air and surface threats, is part of a $2.43 billion Black Sea Fleet expansion program that will allow for increased power projection capabilities throughout the Fleet’s area of operation.

Members at CIMSEC were also active elsewhere during the month of June: