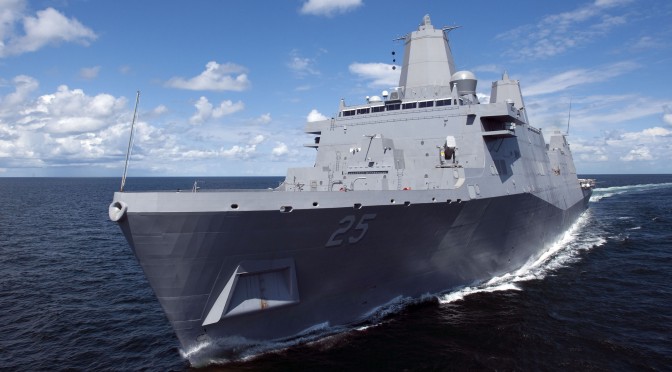 This year, the Navy plans to send out a surface action group (SAG) comprised of three DDGs in order to test distributed lethality CONOPS. This is an important first step, but the next SAG deployed should include a completely different unit. A San Antonio-class LPD. One LPD-17 class ship in the mix will considerably change the capabilities of a SAG across the warfare spectrum, making it a true Adaptive Force Package (AFP) that is more lethal in a number of different ways.

Why an LPD? It is a large littoral combat ship. The LCS classes were designed to have mission bay space so that capabilities could be swapped out as the mission required. LPD-17 class ships, if loaded with a specialized set of MAGTF (Marine Air-Ground Task Force) equipment, have room for equipment that no DDG or CG could dream of carrying, at a greater volume than an LCS. While serving on the USS BUNKER HILL (CG-52), the author recognized that the guided missile cruisers in the US Navy have been built for specific weapon systems, sensors, and engineering equipment. A modification to add more systems that are significant departures from the original design will be at the expense of the baked-in warfare capabilities. More unmanned systems or connectors can be put on a surface combatant, but they will be limited to the constraints of the torpedo magazine, hangar, or boat deck space, and will take away from the important uses those shipboard locations currently have.

On top of the “open concept” interior (so in vogue these days), the LPD also has a flight deck that dwarfs that of any surface combatant; it can launch or recover two V-22s simultaneously. It has massive potential to carry more aviation systems due to the aircraft storage space in the large hangars and deck tie-downs. Not to mention that if a DDG wants to put something in the water, it has to lower it with the boat davits or other limited means. A LPD has a well deck that can splash LCACs, LCUs, and unmanned systems that use the sea interface.

During a recent distributed lethality wargame (of which the author was part of), game participants were given objectives and a choice of AFPs to use towards those aims. The choices included a mix of DDGs, LCSs, America-class LHAs, and “Hughesian” (the author is taking liberties with that word) small missile combatants a la “streetfighter.” We then employed these mixed forces against a red force that was trying to reach an objective, break a blockade, or put troops ashore on an island. The decision-making process was constrained to a surface picture, speed/capability/weapons employment solution set. This was the explicit purpose of this game, being early in the distributed lethality wargame process.

Early in the game a different way of meeting the same goals came to the author, and they involved using Marines with surface or aviation connectors. For example, we can deter an island invasion with the proper positioning of surface ships, but what if that island already had US forces on it? If a red force landing craft was able to get through, it would have to contend with defenders on the island. It is much less politically tenable for red forces to land on an occupied island than to occupy an island that is not populated (or at least has no security or military forces on it) with the guise that it is helping or providing unasked-for security assistance. Blue landing forces would enhance the maritime security exclusion zone around an island or completely obviate it. V-22s can get to the objective a lot faster than surface ships. In the recent DL wargame, if the blue forces chose to use America-class LHAs as part of their a la carte AFPs, V-22s were not an option, they and landing forces from the LCSs were adjudicated from the game for aforementioned reasons.

An LPD can be part of a disaggregated ARG and be used as part of a DL task force. An LPD loaded with MEU equipment that can be quickly employed and join up with an LHA and LSD would be especially useful if needed to create a larger landing force. A red force that wants to land troops to provide “security assistance” or “fight terrorists” would have to contend with LCAC delivered and V-22 delivered vehicles with TOWs, Marines with Javelins and Stingers, and in a longer time period, LAVs, AAVs, and MPCs that have swum ashore from the LPD’s well deck. At the least, the LPD will be a sea base lily pad for long-range V-22 missions, such as non-combatant evacuations or special operations strikes. All three ARG ships do not have to be present for this capability to be delivered.

The future brings even more options. A DL MAGTAF assigned to a LPD could be specifically modified to perform specialized deterrent landings at short notice, or bring ashore capabilities we do not currently use. TOW and Javelin missiles would make landing craft think twice, but there are truck mounted Naval Strike Missiles and other antiship and surface-to-surface missiles. A lot of those systems, including HIMARs, are too large to be delivered by an LCAC as they are currently fielded. These weapons, or other systems such as Hellfire or JAGM, could be modified and put on smaller vehicles that are purpose built to provide anti-access/area denial capabilities. On top of this, the flight deck of the LPD can launch and recover even larger UAVs than the surface combatants can employ. The hangars can support USMC aircraft such as the AH-1Z and UH-1Y that can carry out different mission sets than the H-60 variants that deploy on current surface combatants. New capabilities could use up some of this non-skid real estate, such as strike missile box launchers, additional communications and EW equipment. Not to be forgotten, the well deck could be used to put UUVs and USVs in the water, creating defensive swarms around contested geographic points or high-value units. Being a Supply Corps officer, the author is obliged to point out the additional logistics capability that an LPD brings to the fight; more storage for supplies, mothership capability for smaller units, and space for new capabilities that can be bolted on such as additive manufacturing.

The new E-series ships such as the EPF, ESB, and ESD can all do parts of these missions, but would not survive as well in a contested environment as an LPD-17. That class has EW, communications, self-defense, and logistics endurance capabilities that the newly minted expeditionary classes do not have. This is not discounting them, but they just cannot play in the same environment as the other members of the DL SAGs can; there is a place for them in other parts of the littoral arena.

This is not an original idea. If you have heard this all before, it is because many people saw the potential from the very beginning of the LPD-17 class. James H. Cobb wrote a series four novels from 1997-2002 that were the closest thing for the Navy to Dale Brown was for the Air Force. In his books, then-experimental technology was used to fight battles in new ways. The third novel Seafighter (2002) exhibited the gonzo awesome idea of armored LCACs armed with chain guns, hellfire missiles and even SLAM missiles (as a “streetfighter” concept). The linchpin of the Navy task force that employed these systems was an amphibious warship used to the fullest extent of its capabilities- supporting the battle hovercraft, launching helicopter strikes, and the like. When the author was a member of the CNO Strategic Studies Group, one of the areas of investigation was new uses for current classes of ships, and there were already think pieces out on the LPD-17. These ideas should be used in the distributed lethality concept to bring Marines to that fight.

The Navy-Marine Corps team is at its most lethal when each naval service uses its unique capabilities to the utmost. And the best way to cohesively bring them together for the good of distributed lethality is with an LPD in the fight, part of a Surface Action Group. This will certainly make our potential adversaries sit up and pay attention.

LCDR Chris O’Connor is a supply corps officer in the United States Navy and a member of the Chief of Naval Operations Rapid Innovation Cell. The views expressed here are his own and do not represent those of the United States Department of Defense.