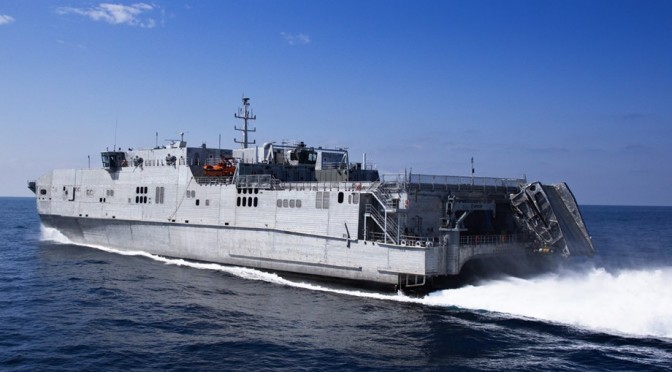 By Tony Freedman with contributions from Mark Rosen

What are the legal implications of arming MSC ships, both for self-defense and for a more robust offensive role?

With the apparent shortage of amphibious ships, the prospect of using Military Sealift Command’s (MSC) auxiliary ships to add depth to Navy and Marine Corps operations is being considered. These ships could be used to supplement the low end of military operations to provide sealift for missions such as a humanitarian assistance/disaster relief (HA/DR) and noncombatant evacuation. They could also provide an alternative platform for high end operations, such as launching offensive weapons, or become a floating base to support offensive operations. However, these ships are not a simple substitute for combatants or amphibious ships. Operationally, they lack ship-to-shore connectors and communication systems, and are not survivable (built mostly to commercial, not military standards). Additionally, these ships are currently not equipped to defend themselves. While adding weapons would not increase the ship’s survivability, it would provide some defensive capability and the potential to conduct offensive missions. This changes the nature and role of these ships. Unlike warships, these ships are manned by civilian crews, either Civil Service Mariners (CIVMARS) or licensed U.S. citizen contract mariners (CONMARS), which introduce questions regarding their legal status if weapons systems are added to the mix.[1] Despite legal reviews by MSC and Navy legal experts, the use of civilian manning is relatively untested and may pose a legal risk to civilian crews. Below, we outline legal precedents that come into play in regard to risk to civilian crews. There are two main aspects of concern: first is the potential lack of legal protection and the second, the willingness of crews to potentially go into harm’s way.

The first concern is the potential lack of legal protection under article 4 of the Geneva Convention. Under the law of armed conflict (LOAC), civilians that support military operations receive legal protections including prisoner of war (POW) status. While MSC ships crews always have the right to self-defense, their legal protections depend on whether the individual is classified as a lawful combatant or not. The key is whether the activities conducted by the civilians are considered to be

“belligerent.”[2] Even though civilians may accompany the armed forces they may not be intentionally targeted and, if they are ever captured, would be entitled to POW status. However, civilians that “cross the line” and involve themselves in belligerent activities would not be entitled to the combatant privilege (immunity). In other words, they can be prosecuted as common criminals or worse as illegal combatants. The civilians would risk prosecution by the International Criminal Court or some other body if an “offense” occurred in an adversary’s territorial waters.

Historically, U.S. policy safeguards civilians from conducting belligerent duties, per se, by aligning with internationally recognized roles for authorized civilians who accompany the armed forces, such as deck, engineering, purser, or supply duties that do not cause direct impact on the enemy. Civilians that command or man weapons systems (apart from self-defense purposes) do have a direct impact. In line with U.S. policy, naval auxiliaries have been operating for many years and maintain their status as “state vessels,” which are entitled to sovereign immunity so long as the vessel is operated for non-commercial service and does not engage in belligerent acts.[3] In spite of these distinctions, a hostile nation could take a more restrictive view by viewing the ship holistically as a single unit, meaning any civilian aboard the ship vicariously participates in any activities that the ship conducts against the enemy.

The second concern with the addition of weapons, particularly offensive weapons, is the willingness of civilian crews to operate these ships in forward locations. One compounding issue that needs to be resolved is whose authority does the civilian crew fall under: military or civilian? Many scholars contend that the concept of “regular armed forces discipline” applies to civilian crews as it does for military crews. In 2007, the Uniform Code of Military Justice (UCMJ) was amended to allow for civilian personnel accompanying or serving with the armed forces to be subject to the UCMJ during contingency operations. However, the constitutionality of this amendment is not yet settled. Specifically, U.S. citizens are afforded certain trial rights (to include jury trials) under the Fifth and Six amendments of the U.S. constitution that military members do not enjoy.

We conclude that the use of weapons aboard MSC ships is appropriate if used for defensive purposes. However, there still remains a risk to the civilian crews with regard to whether these weapons can be used in certain roles which approach belligerent activities, for instance, if the weapons are operated by military personnel with direct civilian support. Direct use and control of weapons by civilians could place the crew under risk of prosecution if captured by a foreign adversary. Furthermore, there is the potential for unintended consequences and risk to future U.S. operations. As a leader in international law and in naval operations, the United States should not set a precedent for confusion between belligerents and non-belligerents which could result in a breakdown of LOAC/LOS norms that we depend on. If the world loses confidence in the LOAC because the U.S. is perceived as ignoring the rules, then the U.S. could lose the rights and protections assured by LOAC, such as sovereign immunity for our ships in foreign ports.

Dr. Tony M. Freedman is a senior research scientist at CNA; he has led studies on mine warfare, non-traditional platforms, afloat forward staging base (AFSB), Special Forces, and SSGN operations. Additionally, he was the Deputy Test Director (Testing Analysis, & Evaluation) to the Joint Command and Control War on Terror Activities (JC2WTA) Joint Test and was CNA’s on-site scientific analyst to OPNAV N00X at the Pentagon. Prior to CNA, Dr. Freedman worked in academia and industry.

[1] There is little legal distinction between CIVMARs or CONMARs according to the LOAC. However, CONMARs do have fewer legal protections than CIVMARs under most bilateral status of forces (SOFA) agreements that DoD has negotiated. Depending on where these vessels operate, the availability of SOFA protections, and the practical benefits of being able to issue a CIVMAR an official passport, should be given weight in deciding whether to make use of CONMAR crew.

[2] The definition of “belligerent” is often referred to as taking part in hostilities.

[3] The U.S. Navy’s claims sovereign immunity (freedom from involuntary boarding, inspection, arrest, or the imposition of coastal state environmental regulations) for all government owned and most leased vessels provided they are engaged in non-commercial service. While the term “naval auxiliary” is not defined in the Law of the Sea (LOS) Convention, the rights and entitlements of such vessels is established in years of state practice and learned texts like the San Remo Manual and the Naval War College’s Commander’s International Law Handbook.

11 thoughts on “The Legal Implications of Arming MSC Ships”