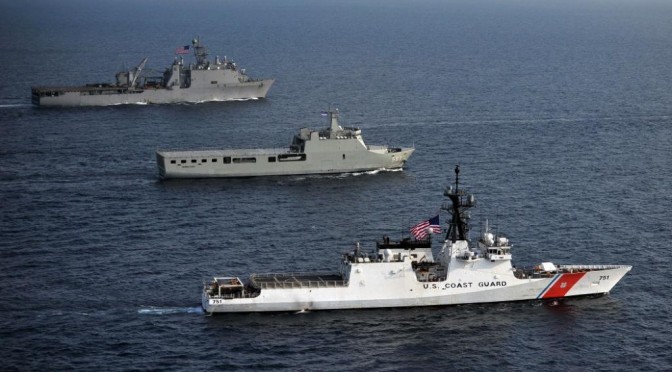 Recently the new Chief of Naval Operations issued a document “Design for Maintaining Maritime Superiority” that outlines how, hopefully, the US Navy can maintain a maritime superiority our foes will recognize and avoid confronting.

If you look for anything specifically regarding the Coast Guard here, you will not find it (other than the cutter in the formation on the cover). The Coast Guard is not mentioned even once, but it does talk about some things that are Coast Guard related. Perhaps the Coast Guard should not feel bad about this. It only mentions the Marine Corps once.

Three Forces that are Changing the Environment

Obviously the Coast Guard facilitates and regulates marine traffic, and is tapped into the global information system. In wartime, these contacts will become essential since they will form the basis for naval control of shipping. He also talks about new trade routes opening in the Arctic. These will only be reliable if we have new icebreakers. He also talks about illegal trafficking.

“This maritime traffic also includes mass and uncontrolled migration and illicit shipment of material and people.”

A Document That Explicitly Recognizes the Competition

“For the first time in 25 years, the United States is facing a return to great power competition. Russia and China both have advanced their military capabilities to act as global powers. Their goals are backed by a growing arsenal of high-end warfighting capabilities, many of which are focused specifically on our vulnerabilities and are increasingly designed from the ground up to leverage the maritime, technological and information systems. They continue to develop and field information-enabled weapons, both kinetic and non-kinetic, with increasing range, precision and destructive capacity. Both China and Russia are also engaging in coercion and competition below the traditional thresholds of high-end conflict, but nonetheless exploit the weakness of accepted norms in space, cyber and the electromagnetic spectrum. The Russian Navy is operating with a frequency and in areas not seen for almost two decades, and the Chinese PLA(N) is extending its reach around the world.

“…Coupled with a continued dedication to furthering its nuclear weapons and missile programs, North Korea’s provocative actions continue to threaten security in North Asia and beyond.

“…while the recent international agreement with Iran is intended to curb its nuclear ambitions, Tehran’s advanced missiles, proxy forces and other conventional capabilities continue to pose threats to which the Navy must remain prepared to respond.

“…international terrorist groups have proven their resilience and adaptability and now pose a long-term threat to stability and security around the world.”

“There is also a fourth ‘force’ that shapes our security environment. Barring an unforeseen change, even as we face new challenges and an increasing pace, the Defense and Navy budgets likely will continue to be under pressure. We will not be able to “buy” our way out of the challenges that we face. The budget environment will force tough choices but must also inspire new thinking.”

Throughout there is an emphasis on understanding history and the strategic concepts of the past. There is also a recognition of the need to work with partners.

“EXPAND AND STRENGTHEN OUR NETWORK OF PARTNERS: Deepen operational relationships with other services, agencies, industry, allies and partners – who operate with the Navy to support our shared interests.”

What I Want to See

If we have a “run out of money, now we have to think” situation, one thing we can do is to try to get the maximum return from the relatively small investment needed to make the Coast Guard an effective naval reserve force.

We need explicit support from the Navy at every level, particularly within Congress and the Administration, for Coast Guard recapitalization. While the Navy’s fleet averages approximately 14 years old. The Coast Guard’s major cutters average over 40. The proposed new ships, are more capable than those they replace. They are better able to work cooperatively with the Navy. The nine unit 4,500 ton “National Security Cutter” program is nearing completion with funds for the ninth ship in the FY2016 budget. The 58 unit, 154 foot, 353 ton Webber Class  program is well underway with 32 completed, building, or funded. But the Coast Guard is about to start its largest acquisition in history, 25 LCS sized Offshore Patrol Cutters. Unfortunately, it appears that while the first ship will be funded in FY2018 the last will not be completed until at least 2035. This program really needs to be accelerated.

We need an explicit statement from the Navy that they expect the Coast Guard to defend ports against unconventional threats, so that they can keep more forces forward deployed. This is in fact the current reality. The Sea Frontiers are long gone. Navy vessels no longer patrol the US coast. The surface Navy is concentrated in only a handful of ports. No Navy surface combatants are homeported on the East Coast north of the Chesapeake Bay. If a vessel suspected of being under the control of terrorists approaches the US coast the nearest Navy surface vessel may be hundreds of miles away.

We need the Navy to supply the weapons the Coast Guard need to defend ports against unconventional attack using vessels of any size, with a probability approaching 100%. These should include small missile systems like Hellfire or Griffin to stop small, fast, highly maneuverable threats and we need a ship stopper, probably a light weight anti-ship torpedoes that target propellers to stop larger threats. We need these systems on not just the largest cutters, in fact they are needed more by the the smaller cutters that are far more likely to be in a position to make a difference. These include the Webber class and perhaps even the smaller WPBs.

We need to reactivate the Coast Guard’s ASW program and ensure that all the new large cutters (National Security Cutters and Offshore Patrol Cutters) have an ASW capability, if not installed on all of the cutters, at least planned, prototyped, tested, and practiced on a few ships (particularly in the Pacific). The National Security Cutters and the Offshore Patrol Cutters are (or will be) capable of supporting MH-60R ASW helicopters. Adding a towed array like CAPTAS-4 (the basis for the LCS ASW module) or CAPTAS-2 would give them a useful ASW capability that could be used to escort ARGs, fleet train, or high value cargo shipments. Towed arrays might even help catch semi-submersible drug runners in peacetime.

The Coast Guard is the low end of America’s Naval high-low mix. It is a source of  numbers when numbers are needed. The Coast Guard has more assets for low end functions like blockade than the Navy. The Navy has about 105 cruisers, destroyers, LCS, PCs, and is not expected to have more than 125 similar assets for the forseeable future. The Coast Guard has about 165 patrol cutters  including 75 patrol boats 87 feet long, about 50 patrol craft 110 to 154 feet in length (58 Webber class WPCs are planned), and about 40 ships 210 foot or larger that can be called on, just as they were during the Vietnam War, when the Coast Guard operated as many as 33 vessels off the coast in support of Operation MarketTime, in spite of the fact that the Navy had almost three times as many surface warships as they do now. The current program of record will provide 34 new generation cutters including nine 4500 ton National Security Cutters and 25 Offshore Patrol Cutters that should be at least 2500 tons.

The Coast Guard provides peacetime maritime security, but is currently under-armed even for this mission. A small investment could make it far more useful in wartime.

(Note here is another post on this looking at the “design” from a Navy point of view.)