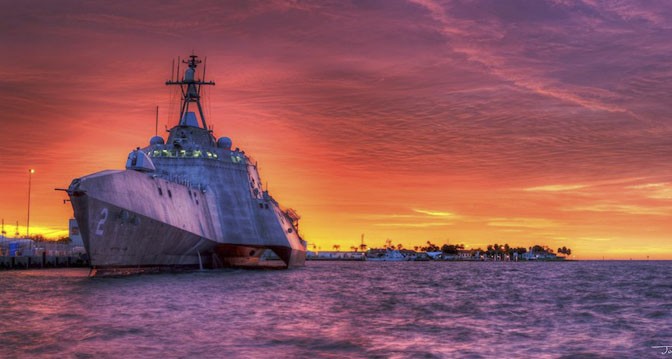 In a recent CIMSEC NextWar article, “The LCS Survivability Debate,” Chuck Hill admirably contributes some much-needed nuance to (and sparked a flurry of articles about) the debate surrounding the Littoral Combat Ship. At the center of this conversation is the question of just how we define the survivability of small surface combatants. Under any traditional rubric, such ships would appear to be sitting ducks, without the durability or defensive capabilities of even slightly larger cousins. Yet, as Hill illustrates, this traditional perspective lacks important insight into the more qualitative assessments of resiliency. His piece provides well-argued documentation demonstrating a key factor: that small surface combatants make bad targets. These ships sale under the radar, so to speak. To demonstrate his point, Hill concludes with some anecdotal evidence:

“As part of Operation Overlord, the Normandy Invasion, 60 US Coast Guard 83 foot patrol boats were assigned to rescue those unlucky enough to find themselves in the water or sinking. 30 went to the American beachheads and 30 went to the British and Canadian beachheads. Being wooden hulled and gasoline powered, they certainly would not have been considered ‘survivable.’

“Apparently they were in the thick of it, because they rescued 1438 men from the water and sinking craft. In spite of all the fire from shore, not a single boat was sunk and not a single crewmen was killed. Apparently the German gunners were too busy with the landing craft hitting the beach and the warships that were shelling them. They simply were not a priority target.”

This argument resonated with me. I manage research for the intelligence and security services firm Security Management International (SMI) and a large portion of what we do is target analysis and vulnerability assessments. We employ an approach known as CARVER – criticality, accessibility, recoverability, vulnerability, effect, and recognizability – which blends qualitative and quantitative assessments of risk, much in the same spirit as Hill, and provides an interesting lens through which to deconstruct what we mean by survivability.

Criticality measures a target’s significance as a component of a larger system or network. Accessibility represents a target’s ease of access. Recoverability is the time it would take the system to respond to an incident and restore a component’s utility. Vulnerability is an account of a target’s susceptibility to attack based on adversary capabilities. Effect is the degree of devastation or impact such an attack on a given target would have on the overall system. And recognizability is the likelihood an adversary would recognize a component’s criticality. What do we learn if we apply this technique to the LCS debate?

Traditional arguments critiquing the LCS’ survivability can be seen as highlighting the more quantitative elements of CARVER (accessibility, recoverability, and vulnerability). As a craft designed to operate close to shore, the Littoral Combat Ship certainly fits the bill for accessibility. While a fast ship, the short range between shore-based batteries and the vessel place it at greater risk than ships operating farther out. Hill covers the topic of recoverability, which highlights similar concerns. He relays part of a U.S. Naval Institute piece on the topic (also a commendably nuanced read), noting that “small warships are historically unsurvivable in combat. They have a shorter floodable length, reduced reserve buoyancy and are more likely to be affected by fire and smoke damage than larger combatants.” A direct hit would likely leave an LCS reeling to a more devastating degree than an equivalent hit to a larger combatant. Even non-state asymmetric actors may pose a degree of risk to the craft given its intended area of operation in congested littorals, which pose the threat of terrorist incidents similar to the USS Cole bombing.

Yet, as the CARVER methodology would suggest, there are additional elements to threat and vulnerability assessment. These are the more qualitative components to which Hill’s article seems to allude. They include criticality, effect, and recognizability. Here the LCS performs significantly better. As a small surface combatant, the Littoral Combat Ship can be seen as far less critical than a capital ship. Therefore, the loss of an LCS presents less of an overall effect on the fleet. Neither of these points is meant to trivialize the potential for loss of life. Rather, the psychological component of how an adversary (especially a symmetric adversary) might perceive an LCS suggests it would present itself as less of an attractive target because of its less significant role compared to an aircraft carrier or nuclear submarine. This all comes together in the final point, reconizability. If an adversary fails to recognize the LCS as a high-value target, which its criticality and the effect of its loss would suggest, this should be reflected in the overall assessment of its survivability.

None of this unequivocally resolves the enduring conversation about how and where the LCS should operate, and against what type of adversary. Thus, the debate around its survivability will linger. Yet, as we can see, and as Chuck Hill rightly identifies, there is a greater degree of complexity in what makes something resilient other than the thickness of its armor. If sixty wooden-hulled Coast Guard patrol boats could survive the invasion of Normandy, surely our depiction of the LCS’ durability deserves greater nuance.

Since 2011 Joshua has served as the manager for research and analysis at Security Management International (SMI), an intelligence services provider in Washington, DC. Josh has co-authored several articles in the Journal of Counterterrorism and Homeland Security International with SMI associates. Since 2013 Joshua has also been a frequent contributor to spaceflightinsider.com, a member of The Spaceflight Group’s community of aerospace news websites. He is a PhD candidate at the University of St. Andrews’ Centre for the Study of Terrorism and Political Violence, where he researches maritime security. Joshua is a Summa Cum Laude graduate of The George Washington University where he received a BA in Middle East Studies from the Elliott School of International Affairs.

One thought on “Deconstructing ‘Survivability’”