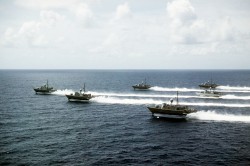 There is a growing belief in U.S. naval circles that aircraft carriers and higher-end U.S. surface combatants are becoming vulnerable to attacks by improved cruise missiles and targetable ballistic missiles such as the DF-21D. Proponents of this belief argue that corvette-sized vessels grouped in flotillas cost less, are more survivable than larger vessels and (somewhat darkly) suggest that U.S. national command authority would be less adverse to losing a few corvettes in combat than they would to the loss of a “capital ship” Arleigh Burke class destroyer. In reality, smaller ships have their own set of weaknesses that makes them no more effective than larger combatants. The littoral combatant ship (LCS) is capable of all of the peacetime and most of the wartime abilities of the corvette. Most importantly, the geography of 21st century seapower does not lend itself to low endurance vessels dependent upon isolated fixed bases for support. It may be useful to build and test a small flotilla of such craft as a proof of concept operation, but the U.S. should not build a large number of corvettes (and repeat the mistakes of the LCS program), until a full program of test and evaluation is complete. Even then, the U.S. should be wary of putting so much of its at-sea striking power in such a short-ranged, vulnerable class of ship. 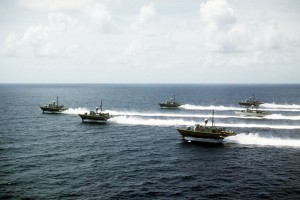 Corvettes have their own “laundry list” of shortcomings that make them undesirable as a replacement for a large part of the current surface fleet. Past missile corvettes have been employed by less powerful navies as low-cost, short range coastal defense units. These craft enjoy interior lines of communication and supply, and are an ideal component to a coastal nation’s anti-access/area denial (A2AD) capability. U.S. corvette advocates however desire to use them in an offensive role on the high seas. Such an flotilla would be dependent on network information for both offensive and defensive operations. In the years since the First Gulf War in 1991, the U.S. has made it very clear to any of its potential opponents that it is very reliant on military networks to achieve its desired military objectives. No peer or near-peer opponent is likely to allow the U.S. unimpeded use of its military networks and will likely targets those systems in its own first attacks. Without network connectivity, corvette forces would be dependent on their own short-range sensors for targeting data and would need to move dangerously close to prospective targets in order to attack. The U.S. is still dependent on the 1970’s vintage Harpoon subsonic anti-ship cruise missile (ASCM) as the likely armament of a missile corvette. Longer range supersonic weapons would need to be developed and fielded in order to make the ship a “battle-worthy” opponent. Failure to do so would create another fiasco like the LCS where key mission components significantly lag behind the construction of the actual ship. Unlike higher-end U.S. combatants, corvettes do not have area defense weapons nor are their weapon systems self supporting. If attacked, rather than a networked defense, each corvette must individually engage incoming threats. Such actions, if uncoordinated and done in close proximity to other ships can have disastrous results. In the 1982 Falklands war, there were cases of ASCM’s decoyed away from one ship that suddenly engaged another without time for response. A corvette is also much more likely to be destroyed with all hands than a larger U.S. surface combatant if hit by even one medium-sized cruise missile. Each such corvette has a crew of between 35 and 40 highly trained personnel who would likely be lost. If the U.S. Navy really does value its well-trained personnel more highly than individual ships, it will not assign them to corvettes likely to be sunk. “They Were Expendable” makes for a good movie title, but U.S. naval personnel in the 21st century are not such a disposable commodity.

Supporters of the corvette claim that the ships can fulfill many peacetime duties including presence functions and training with allied naval forces. The LCS, which is already under construction and in the process of fleet introduction, is already capable of such activities. LCS is also a fully deployable warship capable of sustained operations at sea for at least 21 days. A force of corvettes however has only an 8-day sustainability at sea and would require a significant advanced base from which to resupply and refuel. If the recent behavior of even a close U.S. ally as Japan is any example, few nations would desire a large U.S. military presence necessary to support a large number of corvettes. The LCS can be supported through refueling and resupply at sea via underway replenishment. Since the LCS is already planned for procurement in large numbers, why duplicate its capability with another class of ship?

Finally, the geography of seapower as understood by maritime nations with global interests such as the United States does not support the use of such short-ranged vessels as corvettes. Such a nation must be ready to transfer large parts of its armed forces seamlessly over great distances. Relatively high-speed, long range naval units capable of global deployment are the best solution to the problem of geography. Corvettes can be moved from one part of the globe to another but neither with the speed nor cost effectiveness of larger platforms with better endurance. The fleet of a global power must be able to depart from one location, sail thousands of miles if necessary, arrive in theater and attain sea control without reliance on forward land bases which may be vulnerable or unavailable for use.

A small force of corvettes as a proof of concept test may be useful, but in the current constrained fiscal environment, the first priority of the Navy must remain high-endurance vessels capable of extended combat operations at sea without forward base support. A large force of corvettes cannot meet this requirement. If required in a wartime scenario, corvettes can be procured and rapidly fielded in large numbers. The U.S. is a maritime nation with an interest in protecting and securing what political scientist Barry Posen called the “global commons” of oceanic trade routes. Global power projection requires globally deployable naval units rather than regionally dependent corvettes.

4 thoughts on “Corvettes Do Not Support Global Seapower”