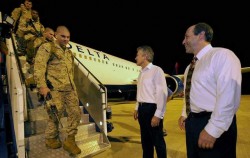 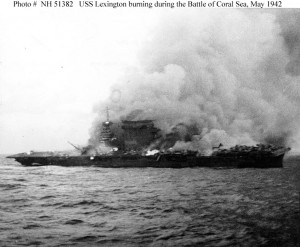 Earlier this week I attended the Battle of the Coral Sea 70th Anniversary Commemoration at Washington, D.C.’s Navy Memorial. Rain earlier in the morning threatened to push the event indoors, but the weather was blessedly cool and dry. Yet storm clouds might be gathering on the horizons of the Australian-American partnership the ceremony celebrated.

70 years ago, a clash of carriers handed the Japanese their first major defeat in the war in the Pacific, turning back an invasion force enroute to Port Moresby. As the Australian ambassador noted on Tuesday it also signaled a change in Australia and New Zealand’s defense formulations. Britain’s ability and responsibility to defend her imperial possessions and former colonies formed the bedrock of the nations’ pre-war planning.

According to the honourable Kim Beazley, the structure of British imperial defense “had crashed on land with the Japanese capture of Singapore, and at sea with the sinking of the British warships Prince of Wales and Repulse.” The American decision to risk carriers to parry the southern thrust threatening Australia – while so much else in the theater was at stake – was praised and highlighted as one of the key moments later bringing the nation under the American security umbrella, where it has remained ever since.

Could Australia face another crisis and restructuring of its strategic security arrangements down the road? This depends much on the ability of China and the U.S. to play nice. Australia is bound to the U.S. in the ANZUS treaty, a firm defense alliance between the two nations and New Zealand (the Yankee/Kiwi portion has been much less firm, but is improving), and has contributed forces to major American-led military conflicts from Korea to Afghanistan. Just last month, U.S. Marines began to deploy to Darwin, Australia, as a step towards strengthening ties (unofficially, in the face of growing Chinese regional clout).

However, Australia is much more commercially dependent upon the Chinese than the U.S., exporting less than a quarter of the goods to the U.S. it does to China, its biggest trading partner by both exports and imports. A serious spat between the two nations could cause Australians to rethink the benefits of their closeness to the Americans, especially if the cause of the row was of only marginal importance to the Aussies.

Similarly, the Chinese could begin to apply economic leverage to force Australia to scale back the level of its security and basing commitments (although done poorly this could risk a backlash). Conversely, the Chinese want to boost their own ties with Australia. In an April interview, Rory Medcalf, director of the Lowy Institute for International Policy in Australia pointed out:

Beijing has recently asked, or warned, Australia to build stronger security and strategic dimensions into its ties with China, to bring them more in balance with the very strong trade ties. In fact, Australia’s military already has quite good relations with the People’s Liberation Army and has provided a conduit of contact during phases when U.S.-China and Japan-China military-to-military ties were in trouble.”

Might Australia decide in the future it’s better to step from under the American umbrella and risk rain rather than a lightning strike? Might the Royal Australian Navy’s highly skilled mariners and expanding fleet be kept in port in the event of a conflict?

Some voices are already cautioning against more closely embracing the American military build-up in the Asia-Pacific, warning of the danger of being drawn into “someone else’s” fight with the potential for dire economic consequences. This appears to be a minority opinion among the public and politicians. According to the Lowy Institute, 85% of Australians are to some extent supportive of the U.S. alliance. As Mr. Medcalf states:

if Canberra is asked any time soon to make hard strategic choices between China and the United States, the signs are clear about the choice it would make—it has intensified the alliance with the United States.”

Yet Mr. Medcalf also correctly points out 15% is a substantial minority, and could grow as the American footprint expands in Australia. I don’t foresee Australia dropping the U.S. for China as its main strategic guarantor any time soon, but if the relationship between the two nations is handled poorly by either side, and its benefits not fully explained, the Chinese would be only too happy to exploit the opportunity and apply pressure to limit Australia’s commitments.

The Americans can help ensure this doesn’t happen. Proactive prevention of the sort of liberty incidents that so inflamed relations with another key partner to the north are vital. Aggressive goodwill diplomacy and exchanges can remind the Australian public of shared values.

And of course, events like the commemoration of the Battle of the Coral Sea remind both nations of shared sacrifices. Said Ambassador Beazley:

As the distribution of global power becomes more diffuse, it is useful for us to have as a reminder American risk-taking for its friends at a time when the US position was by no means the superior one.”

Coverage of the commemoration down under: http://www.canberratimes.com.au/act-news/us-flags-stronger-security-ties-with-aust-20120503-1y228.html